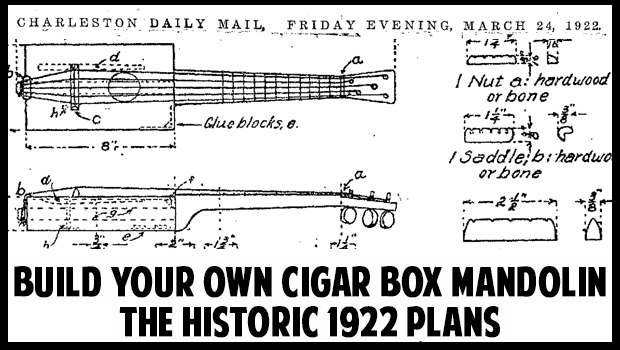 The plans feature a solid 5-string (!) mandolin made from a wooden cigar box. From the lost files of cigar box guitar history, we present these plans which were rediscovered by John "Reddog" McNair of Reddog Guitars.  (Thanks again, Reddog!)

These plans were created by Charles A. King of the State Normal School in Plymouth, NH.  (Only about 60 miles away from the C. B. Gitty workshop.)  These plans were syndicated and published in newspapers throughout America.  This particular copy was found in The Charleston (SC) Daily Mail, dated March 24, 1922.

We have taken the scan and retyped all of the text for ease of reading.  The original illustration is reprinted below.

If anyone builds these plans, please email pictures to GittyFan@cbgitty.com.  We'll try to feature you on the Cigar Box Nation Facebook page.

No one can compute the energy which has been wasted in the vain endeavor to make a playable instrument of the mandolin type with a cigar box as the basis of inspiration, but the writer recalls one which was made by a “Handy Boy” while he was convalescing from a long illness, and he will endeavor to tell the story of its making here.

The first thing was to find a perfect cigar box, with no splits nor broken pieces; it was taken apart carefully to be sure the delicate wood was not split in the process.  The paper was scraped off and the joints of the box glued and nailed together again, excepting the top, which was left off to allow the small glue blocks of E and  F to be glued in place by spreading glue on two sides of the block and rubbing it into perfect contact with the angle.

These glue blocks were about 1/2” across the long angle and not more than 5/8” long and were glued into all corners and around the inside of the top edge of the sides as at F:  after the glue was thoroughly hardened those at F were planed off to receive the top later.

The neck was whittled from a piece of soft white wood or poplar and the dowel G of the neck fitted to the box by boring a 3/4” hole to receive it, glued in its place, and nailed through the end of the box into the neck where they joined.

The bass bar D was made and glued on the underside of the top as at D after which the 2” hole was cut in the top and the sounding post H 3/4” in diameter, just enough higher than the sides to stay in place was glued upright on the bottom.

When this had set, the top was glued on the sides and the glue blocks F and a weight placed upon it until the next day when the glue had thoroughly hardened.  The box was then carefully smoothed and sandpapered; the nut, saddle and bridge were whittled from maple and glued in their places: note that the neck is cut below the fingerboard to receive the nut at A and the fingerboard projects above the box where they are joined.  The pegs with tapered shafts were whittled from maple and the 5-15” holes in the head were tapered with a round file to receive them.

This handy boy used old violin strings, but strings of various sizes may be made of wire, of hard fish line or of varying numbers of strands of fine silk; these fish lines and silk strings may be shellaced (sic) and allowed to become thoroughly hard.

The most difficult thing is the placing of frets in the fingerboard, which regulate the fingering and the pitch of the string.  The frets may be made of a piece of tin about 3/8” wide, doubled over to make the top edge round so it will not cut the string, and fitted into a fine saw cut made 1/8” deep which must be so placed as to make the correct tone.  The best way to do this is to string the instrument, and by moving a piece of wire back and forth find the correct location by comparing the tone with a piano or other instrument of correct tone.  Make every tone and half tone for an octave, the octaves first , then the fifth, the thirds, the tones and the half tones.

Such an instrument may have from four to eight strings or may have five double strings as in a standard mandolin.  It may be played with the fingers, or with a plectrum or picker, which may be made from a discarded tortoise shell comb.

After the frets have been glued in their places, the instrument was unstrung and given a coat of dark mahogany stain, followed by two coats of hard varnish.

Could you use mandolin string on this?

Is there a pdf for these plans I would like to make this.

Hmmm.... in the next to last paragraph it's stated that the instrument may have from 4 to 8 strings or may have 5 doubled strings as in a standard mandolin. That would be a ten string instrument. I don't know of any standard mandos from the '20s or present with that configuration but it's an interesting statement. Shame no mention was made of the tuning for a 5 string mando. Pretty cool design though to use a bass bar and sound post which is normal for violins but not so much for mandos.

Interesting that the design used a sound post and tone bar as seen in bowed instruments.

A five string mando type box tuned in fifths might be a fun project. Hmmmmm......

Started by John Derrett in Performances, How to Play, Lessons, Concerts. Last reply by Sam Blessing 2 hours ago. 8 Replies 1 Like

Started by Taffy Evans in Other stuff - off topic, fun stuff, whatever. Last reply by Carl Floyd yesterday. 6 Replies 0 Likes

"You are the bluesman Uncle John! You’ve got the groove and the black & white moves. In…"
2 hours ago

"I got tired watching you hustle through the set-up Kale! I thought everything sounded pretty good…"
2 hours ago

This group is for discussing the basics of CBG building for newer builders - where to start, what…See More
2 hours ago
2966 Comments 102 Likes

"Glad to hear it Kale! That is why I make it available. Christmas songs are really fun to do in a…"
6 hours ago

"I’m not sure how much rigidity they add to the neck, probably some. It does make it possible…"
6 hours ago

"You are very observant Kale! I have been going crazy with buzzing cigar boxes. I thought a custom…"
6 hours ago