If this is not the appropriate place to ask this question, I apologize.  I'm preparing my first box for a resonator cone but am unsure as to where the piezo should be placed.  Is it placed on the cone itself or somewhere on the box?  Any advice will be greatly appreciated.

I had only one CBG that I electrified with a piezo pup (pick-up) and a pre-amp. The results were not that great as it tended to be too sensitive in spite of my wrapping the piezo pup in foam, mounting that in a small wood casing and then hot gluing the casing to the underside of the soundboard beneath the bridge (this wasn't a Reso-CBG). Whenever I played the instrument, I had a lot of objectionable finger noise when I picked or fretted the strings. For this reason, I would recommend going with a magnetic pup. Also, the pre-amp circuit was designed for impedance matching (between the piezo pup and the external amplifier) and the pre-amp had no (or insignificant) gain.

Regarding your question as to piezo placement, that depends on the type and delicate-ness of you metal resonator. If it is a metal bowl, can, paint can lid, hub cap, license plate, etc., then it should be strong enough to mount a piezo pup directly on the resonator. However, if your resonator is a delicately spun resonator cone designed especially for use with reso- guitars, ukuleles, or mandolins, then you should avoid doing so. However, some cones come with a wooden "biscuit" (you can make your own) upon which the bridge is placed. The biscuit fits in the middle of the cone. Putting the piezo on the biscuit is probably the best place with delicate spun cones. Hopefully, there will be enough room on the biscuit for you big round piezo. An alternate might be one of those long narrow under-the-bridge type of piezo pick-ups. They are more expensive, but some say they sound better; I have no direct experience with them.

Piezo placement should also work well off of the metal resonator. In fact, because piezo pups are so (too) sensitive, placement elsewhere in the box may yield better results. Again, research on CBN how to best wrap a piezo pup in something rubbery to help isolate the pup from excessive vibrations. I have seen on CBN some folks who hot glue a piezo (cut to size) into a bottle cap, and then hot glue that to the neck or under side of the sound board. I should do more experimenting, especially with trying to isolate the piezo pup from the excessive vibrations in the sound box. One thing I should try is building a piezo based electric guitar w/o the sound box.

But, because (I believe) you can not desensitize a piezo pup enough so it won't pickup annoying finger noise, I still recommend going with magnetic (wire wound) pups. On E-Bay you can often find people selling Chinese-made 6 pole mag pups or 4 pole bass pups for (say) less than $20. You would mount it thru the sound board, perhaps at an angle so each string would "fall" over a magnetic pole.  There is a lot of information on CBN about installing both magnetic and piezo pups. You can use the Search feature at the top right corner of the page for most pages on the CBN Ning-based web-site. Practice using keywords like piezo, magnetic, pickup,pup, placement, etc. and you should get a lot of usful search results.

Good luck with your project,

My latest CBG build which I completed in August, 2012 features a CB Gitty 2cm wide piezo which I glued inside a bottle cap with hot glue and then glued to the underside of the sound board (again with hot glue). I used hot glue liberally, and even glued the back side of the pickup filling up the bottle cap with the piezo pickup suspended in the middle. The results were an instrument which was much less sensitive to the "finger and handling noise" problems I had with my earlier piezo experiment. So, now I have to eat my words and admit that you can build piezo pickups with acceptable sensitivity such that finger and handling noise is minimized.

Note also that the radio shack piezo I used previously is bigger (2.7cm wide) as compared to CB Gitty's (2cm), and so, will not fit inside a bottle cap. I was thinking a larger bottle cap, such as those of fruit juice bottles might also work. I plan to do some more builds and see how far I can take piezo pickups. Additionally, I have purchased a 4-pole bass pickup in Hong Kong for about 6 bucks which I want to test in a future build. It will require some engineering work on my part to see how to fit it into a 4-string CBG or Paddle Box Dulcimer..

My recent experience with piezo pickups using the "hot glue and bottle cap" method of isolating the pup has rekindled my enthusiasm for piezo pickups. But, I find this "hot glue and bottle cap" design tends to dampen (reduce) the high- and mid-range response of the pup, resulting in a very bass-y sound. To get a more balanced sound from my guitar amplifier, I have to turn down the bass, raise the mid-range about 1/2 way up, and turn the treble (high-end) up about all the way, which results in a lot of objectionable hum from the amplifier, etc. So, I'm planning to add a pre-amp to see if that helps. I think the "hot glue and bottle cap" approach should work fine on canjos, cookie/cake tin banjos, and oil can guitars (and the like) because these metallic resonator boxes sound more high pitched to begin with, so I'll have to try experimenting with a piezo on one of these instruments to prove it.

Thanks, Rand!  Very helpful advice.  I'll be using a brass cone I got from Old Lowe, here at cbn.  And now I'm going to get a magnetic pup from c.b. gitty.  Or maybe I'll just go straight acoustic.  I'm also contemplating building a license plate reso, but I can imagine that amplifying that will present even more problems to solve.  But that's why I am enjoying this new-found hobby/obsession.

Thanks again for the help.  I appreciate it!

Here's some more information on adding a piezo pickup to a CBG that features a spun metal resonator. This photo comes from a fellow CBN member (Clock and His Wolf) and illustrates clearly how one could mount a piezo pickup to a cone. In fact, the one illustrated in this photo is a real product, the Fishman Resophonic Pickup which is available for something like $120 a pop. Here's the photo... 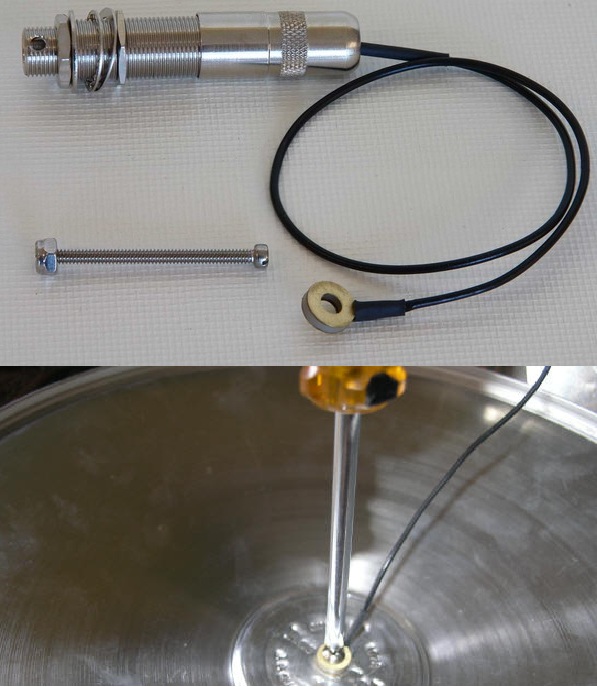 Here's a couple of links that provide more info on the Fishman Reso Pickup: Product Description and Installation Guide.

Since most of us CBG makers don't have such deep pockets, an inexpensive alternative is to carefully cut down a regular circular piezo pickup and then drill a hole in the middle of it - assuming you want to mount it in the same manner. An alternate method would be to make your own biscuit (a piece of wood that fits between the bridge and the center of the resonator cone), cut out a "hollow" for the piezo pickup and glue it to the biscuit with hot glue, silicon seal, or tile caulking compound. You'll also likely need to put a glob of hot glue (or other isolating material) on the underside to isolate it more. However, I'd hold off on doing it on my initial build, allowing me time to test whether I need that much isolation. Adding it later is not that much extra work.

This information comes from other CBN builders, and I have yet to test it. I hope to do so this coming Fall.

Building a reso guitar for my neighbour out of an old guitar neck and a Cedar box that Salmon was package in.  Note the lovely painting.  I am using the bottom for the sound board so as to keep the painting whole. 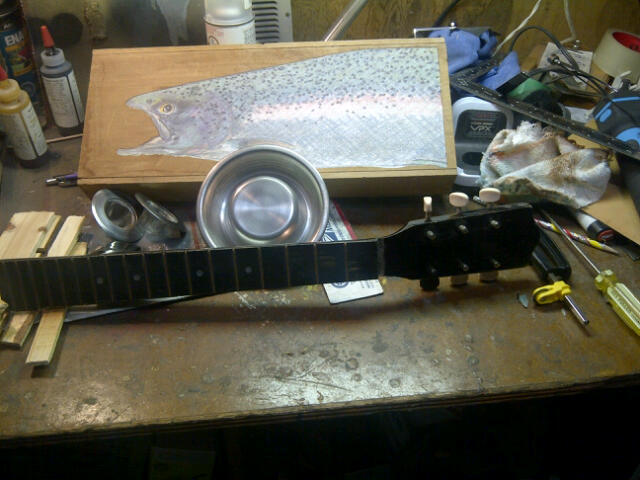 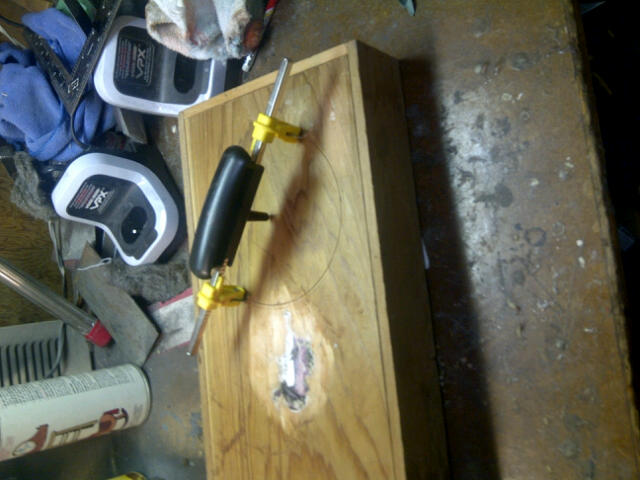 Braced the box and attached the neck (2 pics): 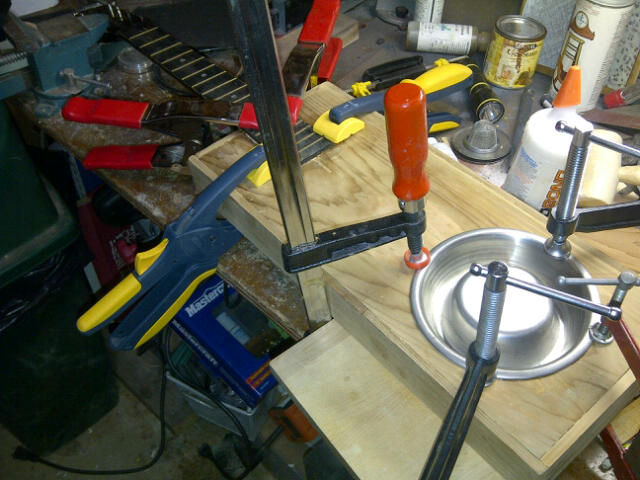 Hi Tom,
Looks like a great photo essay of your build. I assume you'll be adding a piezo pickup to your Reso Guitar. Looking forward to see how it tuns out.
-Rand.

What kind of a circle cutter is that you're using to cut the hole for the bowl?

Permalink Reply by Ken Vickerson on December 13, 2016 at 11:35am
Hey Doug what did you end up doing? I'm working on a 4string reso and planning to use a piezo disc. I've had a lot of luck with them under the bridge in my 3stringers but not sure where to place it and how to adhere it. I've screwed the biscuit to a cat food dish and it rings like a bell but no room for the piezo between the two. I'm thinking I would stick it to the underside of the dish. Also how to adhere the dish to the box? Any help appreciated. Cheers K

"It is now Brian. Homemade straps are the best!"
2 hours ago

"Nice pair of CB ukes Robert! The wood finish on the boxes looks great."
2 hours ago

"I like it Ron! Cool triangular body."
2 hours ago

"I can feel the passion in your singing and playing James. Well done."
2 hours ago

"In the groove as usual A.D.! You are one creative and productive musician/videographer."
2 hours ago

"You are the Kazoo King, Kale, with quite the Kollection! Does a Kazoo play a day keep the doctor…"
3 hours ago

Brian updated their profile
3 hours ago

"thanks, it was a crudely built 4 string guitar with a piezo pickup...and tape holding the box…"
4 hours ago

"I appreciate the listen Brian, Alan, and James! Unlike the original version (done in the studio…"
4 hours ago