I finished my first build with a home-made box a few weeks ago, and have been enjoying it immensely. I made the box from 1/8" spruce for the soundboard and 1/4" spruce for the back and sides, all solid wood. I recently took the guitar over to a friend's house and unfortunately the gig bag fell over... When I arrived the guitar had lost much of its tone and volume, and was making a strange warbling sound which got worse with light pressure on the soundboard.

I noticed later that the lid was coming away on one of the corners (I had glued the lid down with superglue). I thought this might have been the cause of the problem, so I cut the soundboard off with a knife and re-glued with wood glue, and gave it a full 24 hours under clamps to set.

After re-stringing the guitar, there was an improvement, but the sound is still nowhere near as crisp as before, almost distorted and there is still a slight warbling at times.

I believe this may be a problem with the bracing inside the box, which looks like this: 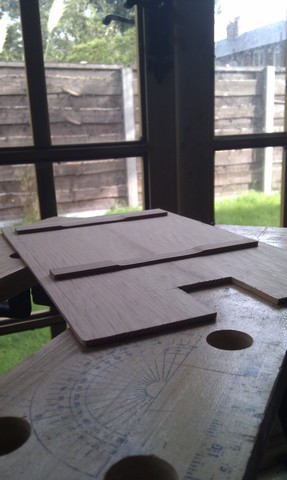 These are excess strips of spruce which I just glued in place - does this look sufficient to keep the soundboard stiff enough?

I guess the next step will be to try to remove the soundboard again, but I'm thinking this will be a lot tougher with the wood glue - any tips there?

Anyway, any input or advice would be gratefully received.

From my experience, when an instrument just "falls over", it just gets a ding and that's it. In your case, you say you used superglue to glue the soundboard to the frame. When superglue dries it forms a rather brittle bond which can break with a fairly well focused lateral blow. So, any superglue joint is suspect, especially between the sound board, back board and the frame. Whether the jolt would be strong enough to damage the glue joint holding the bracing to the backside of the sound board is certainly questionable, unless the ends of the bracing butts up against the side of your box, because the blow would have to provide a lateral (side) force against the seam of glue. Having re-glued your sound board with wood glue may well make it difficult to re-open. Before trying that, maybe you could have a friend press down on your sound box (in different places) while you play the instrument to see if there is another glue seam that could be at fault along where the sound board and the back board are glued to the frame (sides of the box). If the offending sound goes away at some point, it is likely that place has a bad glue joint. If this fails, then try to disassemble the box and inspect the glue joints on the internal bracing. What you may need to do is to replace the 2 internal braces and use wood glue instead of super glue when reinstalling the braces. I usually use either white carpenter's glue, TightBond 1 or TightBond 2. [Superglue and Gorilla Glue are glues which I avoid.]

Well, I wish you good luck in diagnosing and fixing your distortion problem. The box itself was very pretty and appeared well made. I think on future sound boxes you'll want to use TightBond, or at least a glue designed for wood.

Permalink Reply by Richey Kay on November 8, 2013 at 4:36pm
Thanks for your comprehensive and scientific reply Rand. I should stress that I would never usually use CA glue for these joins, it was done in haste as I wanted to play it! All the other joins on the box were made with wood glue. The braces do touch the sides so I could certainly believe that the knock could have cracked the glue. When I have some more sheet wood I'll make a new box and a spare soundboard just in case I have to just transplant the neck.
Thanks again,
Rick.

Super glue is not for wood. Always use tightbond wood glue.

Its good for gluing your fingers together if thats what you want to do. :)

Aw now, that stuff's pretty good for gluing bone nuts to necks and keeping screws from backing out.

Permalink Reply by Richey Kay on November 8, 2013 at 5:09pm
OK - update... I've managed to cut the soundboard off with no damage to either part using only a small craft knife and some skill.

I'll let you know how the re-bracing goes. Thanks all!

Definitely  use Titebond ( Titebond 1 can be steamed apart if a repair is needed ). Suggest you fan strut the front using 6mm square spruce planed to either a rounded or chamfered top after glueing. The one running down the centre will also reinforce your joint 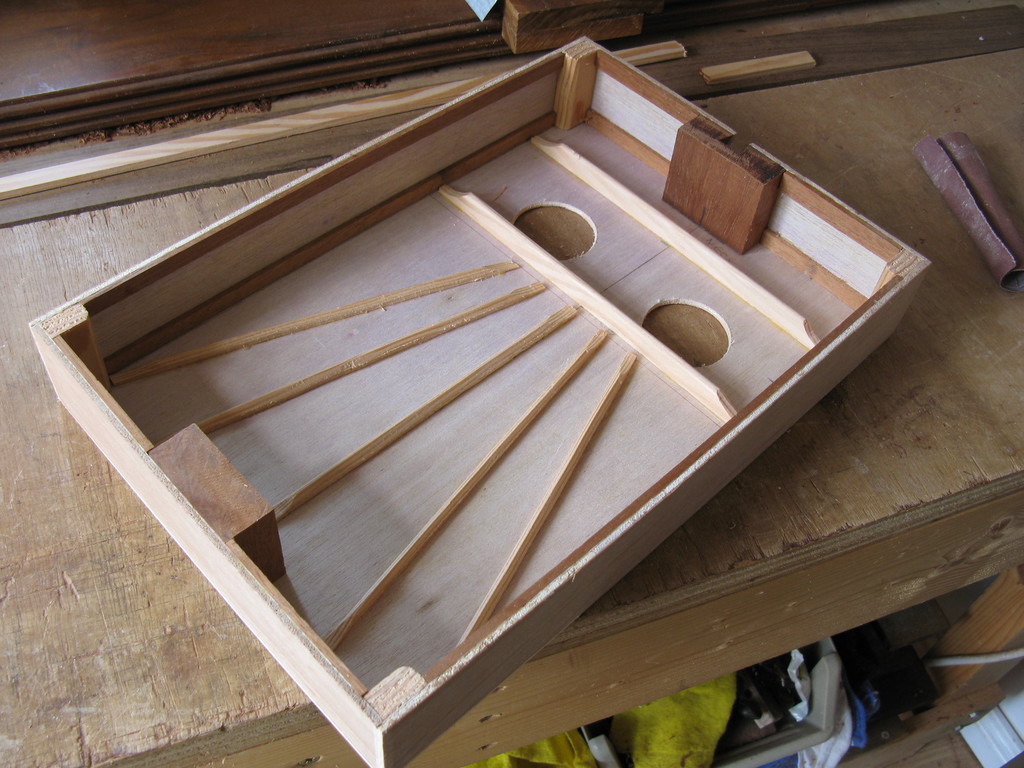 Permalink Reply by Richey Kay on November 9, 2013 at 8:24am
Thanks Michael. this kind of bracing certainly looks much better. My only issue is that I use a 'neck through' design, so there is only approx 2 mm gap between the bottom of the soundboard and the neck, hence the odd shape of my braces.

I noticed earlier that the brace at the back is not underneath the bridge. for this box I will try adding 2 more braces the same as the ones already there. My reasoning is that if it working fine before, I should be able to correct it.

I had neglected to consider this on my original analysis of the problem likely because I seldom build my sound boards by joining the two halves (as some builders do with great effect when using book matched pairs of boards cut from the same piece of nicely grained lumber).

Permalink Reply by Richey Kay on November 9, 2013 at 4:01pm
Hey Rand. Nope, the seam was joined with wood glue. As I mentioned the only thing I use superglue for on my builds is to attach the bone nut to the neck. The only reason I used any here was because I was in a hurry to play the guitar!
I was very happy with the join on the soundboard. You literally have to get right up close to see it. As MFJ said - I'll maybe start taking more material off the neck recess to make room for the bracing.

That's a nice design there. One of these days I should start experimenting with internal bracing. But, to this point, I don't make very wide sound boxes and the material I use for the sound board and backboard is 2mm thick plywood veneer. The sound boards I make also are one piece and so may not need as much bracing as a sound board made of two (or more) butt joined pieces of wood.

Also, I like a slender (not so wide) sound box because they are easier to hold on to with your remaining fingers while you pick or strum the instrument. Of course, any educated player probably would object to my playing style. I usually play 3-string diatonic stick dulcimers and tend to play simple tunes by down picking with my thumb. Holding on to the sound box probably is a bad habit that will ultimately limit my growth as a musician. After all, that's what guitar straps were invented for.

Your boxes are always so well crafted. Keep the photos and ideas coming.

"GREAT! Would love to see a vid of this"
1 hour ago

the anonymous pick commented on Stephen Sell's blog post How to add photos?
"Congrats  Cindy . it worked ;-)"
1 hour ago

"Thanks Keith ! appriciated !"
2 hours ago

"Thanks Kale !for your message conformation ! appriciated !"
2 hours ago

Taffy Evans replied to Mel Cooke's discussion Is it OK to use a hardtail bridge on a fretless 3 string acoustic?
"Hey Carl, I modified the computer chair. Haha. Taff"
4 hours ago

Taffy Evans replied to Mel Cooke's discussion Is it OK to use a hardtail bridge on a fretless 3 string acoustic?
"Hi Cindy, the answer could be in my post earlier, above. Even a bigger issue if nylon uke strings…"
4 hours ago