Over the past few weeks I've been developing a new "thin walled" sound box design. My inspiration came from professionally-made instruments which usually have very thin sides (usually 1.2 to 1.5 mm thick). I usually make instruments with a 0.5 cm thick (5 mm thick) sides and with 2 mm thick plywood veneer sound and back boards. I was thinking that maybe I could make a better sounding sound box if I were to make the side walls of my sound box out of the same plywood veneer as I use for the sound board.

Because the simplest sound box design is a rectangular box, my first thin-walled sound box would be a rectangular box. Straight lines and right angles are a lot easier to deal with as compared to curved-wall designs which would likely require steam bending of the plywood veneer. I'll leave these more complex build issues to a subsequent build.

Here are some photos with comments... In the photo above, you can see how the side walls of the sound box are built. The side walls are made using thin (1.5 mm thick) plywood veneer. The side walls are butt joined using 3" long pieces of cove trim as corner posts. I later glued on bamboo skewers to the top and bottom (inside) edges of the walls to provide a bit more structural support and a larger glue surface area for when I get around to gluing on the sound and back boards. The rounded part of the skewers actually extend a bit beyond the edge of the side board. I then file and sand them back to produce a somewhat flat and level surface to better glue on the sound and back boards in a later build step. The bamboo skewers can be seen in the lower part of the photo above. Here's another photo. 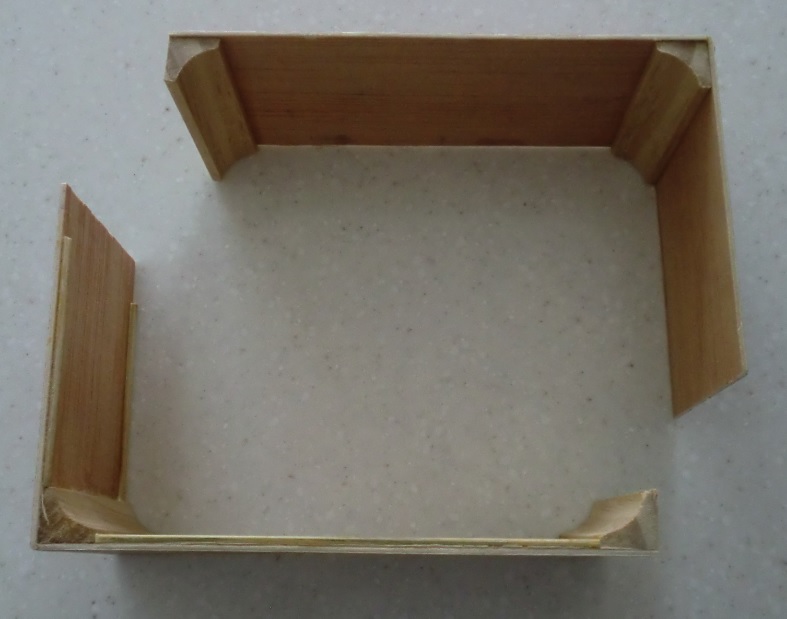 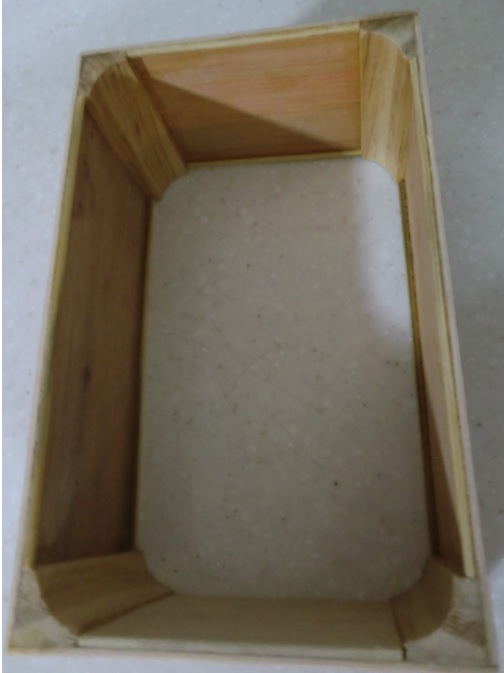 Here we see the two "L" shaped side-walls glued together to form the rectangular frame of my sound box. Somewhere around this time I decided that I would have to "beef up" the two short walls of the sound box to better (more securely) fit the neck to the sound box. This can be seen in the photo below. This photo (above) shows my half-finished thin-walled sound box.

If you look closely, you will notice that I have strengthened both short sides by gluing in a second piece of plywood veneer. I felt that the strengthening would be needed because those two sides will be supporting the neck of the guitar. You can also see the cut in the side I made to receive the neck. Also, on the tail side I glued on a 0.5 cm thick piece of wood to further support the tail end of the neck.

I decided to paint the box black because the plywood board edges presented themselves in white which contrasts to much with the wood veneer. Had I used solid wood, I wouldn't have had this cosmetic problem (and I'd just stain and poly the box to get the natural color of the wood). But the black box look pretty good.

This photo shows the neck, headstock and fretboard I built for the instrument. The headstock is slotted and uses a 1x3 set of open geared tuners. The fretboard is diatonically fretted using fret positions calculated for a 45 cm string length (VSL). The fretboard is made out of sapeli wood, while the neck is made out of "red beech" ("hong ju") wood. The red beech is pretty hard as compared to sapeli and cherry wood. 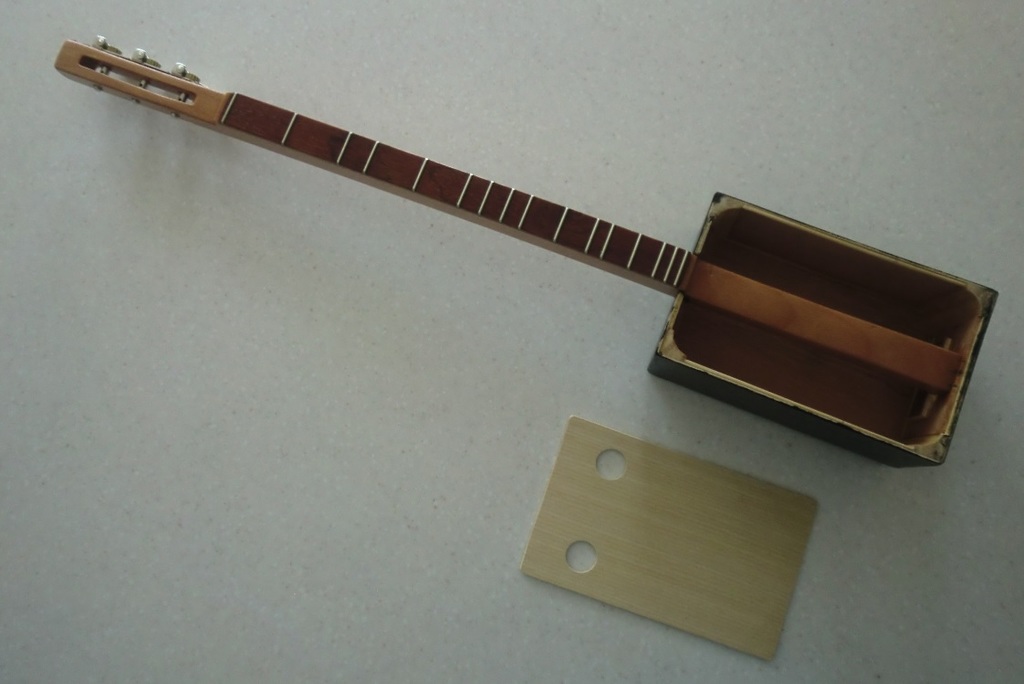 This photo shows the finished instrument. It's strung up using strings 1, 2 and 3 from a "thin" set of guitar strings. I have tried several 1-5-8 tunings from EBE to CGC, and my favorite is EBE (all the other tuning are too highly pitched IMHO). The rather short scale length means it will be highly pitched. Maybe next time I string it up I'll use strings 2, 3 and 4. Another possibility is to use tenor ukulele strings to reduce the pitch. In this case, I'd use strings 1, 2, and 3 from the set of 4 uke strings. Here's another photo of the finished instrument. The final length over-all (LOA) of the instrument is 68 cm with a 45 cm VSL.

The thin-walled sound box makes the instrument sound bright and clear as compared to most my other instruments. My typical sound boxes which are build usually of 0.5cm thick cherry or sapeli sound a lot warmer. Volume wise it sounds perhaps a bit louder than most my instruments, but it's pretty subjective at this point. I think I'll build a few more of these to see if this style of building has more merit.

Nice job Rand....I was just about to start building a box that is bigger than any cigar box that I have for a 3 string weed whacker bass guitar and I will use your ideas.  Thanks for sharing.  I think I will use square corner bracing, because I think that even though the cove molding would reduce weight, it would make clamping the glued joints a bit hard.

The way I clamped the cove molding on to the sides was to use a scrap length of cove molding and I turned it so that the two pieces of cove molding faced each other cove-to-cove, producing a flat surface which my clamp could better grip the pieces when I glued them up. Here's a quick diagram showing what I mean... Looks nice Rand, You can get rid of the raw ply edge by adding a hardwood strip binding like this 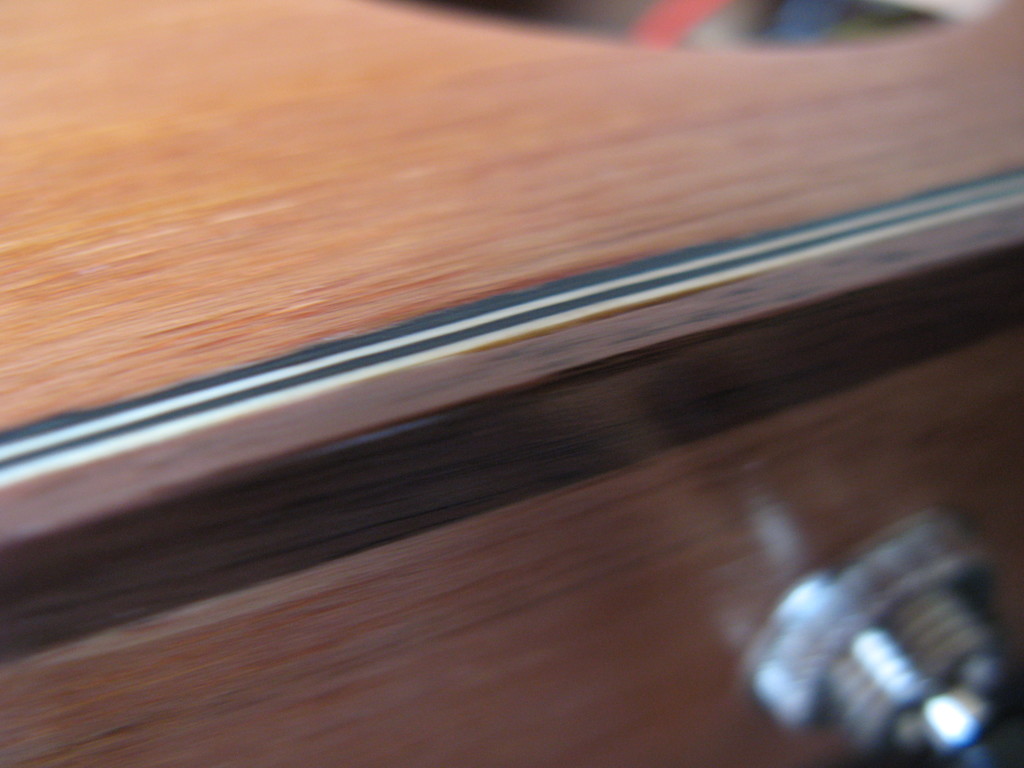 I don't think I'm capable of such precision.

THats a good build Rand, thats how I usually build my boxes, but my edges are not as good as yours...I need a lot more practice.

On this style of box built using the 2mm thick plywood veneer for the sides and the sound and back boards, I cut all the rectangular pieces using a combination square (tool) and a stout-handled retractable blade utility knife (not those cheap thin-handled box cutters). I usually have to make 4 or 5 passes of the utility knife to cut all the way through the wood. Then, after carefully gluing together the pieces, sanding the edges should produce a box with nice edges. It may just takes some practice, so try building a few smaller "test" boxes to hone your skills before going out and building a sound box for your instrument. Good luck.

"It is now Brian. Homemade straps are the best!"
2 hours ago

"Nice pair of CB ukes Robert! The wood finish on the boxes looks great."
2 hours ago

"I like it Ron! Cool triangular body."
2 hours ago

"I can feel the passion in your singing and playing James. Well done."
3 hours ago

"In the groove as usual A.D.! You are one creative and productive musician/videographer."
3 hours ago

"You are the Kazoo King, Kale, with quite the Kollection! Does a Kazoo play a day keep the doctor…"
3 hours ago

Brian updated their profile
3 hours ago

"thanks, it was a crudely built 4 string guitar with a piezo pickup...and tape holding the box…"
4 hours ago

"I appreciate the listen Brian, Alan, and James! Unlike the original version (done in the studio…"
5 hours ago