Use (or is it abuse?) of a famous USA brand name by a UK cigar box guitar maker / seller.

I've recently encountered a curious thing - a customer asked me if I could fit a humbucker pickup into a cigar box guitar that he'd just bought, and I said it depended on how it had been built, but I'd be happy to take a look at it and see what could be done. Nothing curious there, a bit of customisation/improvement work on another maker's guitar, the sort of stuff I do a fair bit of...but then he messaged me and told me the "brand" name and where he'd bought it, and warning bells started ringing.  The name is quite well known in the mainstream guitar world, and I was intrigued to hear that they might be making cigar box guitars. I checked their website - no cigar box guitars to be seen, and also checked the UK vendor's website  (they also sell on eBay). There was a fairly ordinary-looking cigar box guitar, proudly bearing a big injection moulded plastic logo on the headstock, and another unique identifying feature that tied-in with the name on the logo, and it was listed as an "officially licensed product". I was really intrigued, as it looked like a typical hobby-made 3 stringer, but with this brand name on it: to me it just didn't look right. I sent an email to the owners of the brand name to let them know, because  from the photos this looked strange, and not the sort of quality I'd expect such a company to associate themselves with.

Anyhow, a few days later, the guitar was brought round to me for me to have a look at,. and just as I thought, it was an ordinary homemade guitar with "that logo" on the headstock. It was OK, like dozens of simple home-made guitars I'd seen before, not the worst I'd ever seen, but pretty typical for a home-made CBG. It did have some serious flaws, such as a zero fret with no "spacer nut" or string guides to keep the strings from flopping about sideways, so that really didn't work at all, and loads of other niggling problems. The strings fitted to it were the wrong gauge for the quoted tuning, so the owner had broken one trying to bring it to pitch and given up after that. There were a number of other faults, the sort of thing everyone encounters when trying to make a CBG, but certainly not the sort of thing I'd expect to see on a guitar bearing a famous brand name. My customer told me that he'd learned that the company selling them had bought the nameplates (and another unique identifying component) from the US company and they'd allowed them to put them on these cigar box guitars. This seemed like commercial folly by the US company, not to mention it must have needed a load of B.S. from the UK retailer to convince the US brand that they could make a product worthy of their name.

Anyhow, it seems like the famous US company aren't too happy about this, and will be talking to the UK traders about it. I hope this gets nipped in the bud, as it really isn't healthy and does no good to anyone.

The whole affair  really got to me, that someone would stoop so low to low as to con a brand with a good reputation to allow their name to be put on something that was clearly not in the same league as their other products. My customer had obviously bought the guitar on the strength of the brand name, but it fell short of his expectations. As for the potential damage to my business, it's fairly incidental and doesn't really affect me much, as we still can't keep up with the demand for our guitars, so I've no axe to grind there. However, I'm sure some people may be swayed by the brand name and buy one, only to be disappointed with what they get, and this could take sales away from other honest hardworking people.

Everyone I know who makes cigar box guitars is rightly proud of what they do, whether it's just hobby makers doing things for themselves, or to earn a little money, right the way through to the handful of full-time professionals, and most people like to put their own name on what they make. This development really stinks - it brings down the name of a well known brand, it gives the CBG movement a bad name, and it demeans what most people are trying to do, whether they are just expressing themselves and enjoying their craft, or trying to make a living through something they are passionate about.

I've kept names out of this, because I don't want to  point the finger, I just wanted to bring this to people's attention. However, I will say that I think this is a downright abuse of a brand name, and a shameful attempt to exploit a the name of a well-loved and well-regarded company by sticking a logo onto the headstock of a very ordinary and flawed instrument. If that UK maker or seller is on here, I appeal to the better part of your conscience and ask you to please stop doing this.

We recently had another thread talking about copyright and trademark issues, where some song owners were going overboard because someone posted a youtube showing off their new amp by playing a cover.

Here we have the other end of the pendulum swing, a deliberate trademark infringement intent on deception for profit.  I seriously doubt the story that the logos were approved for the actual use, I suspect they were from a garage-casting run and gray market procured.

Most everyone here is smart enough to know where the line is with embellishments and decorations that add character versus fraud, or at least to ask on the forums if there is any doubt.

No, apparently the parts were purchased from the US firm and used with their knowledge, but it looks like they had jumped in without checking out the credentials of the UK maker. I was very surprised, but apparently that's what happened - bullsh*tting a legit company into letting them use their logo and then abusing that trust by marketing something that really falls short of the mark is sharp practice in my eyes. Bad news all round - the US company should have been more vigilant, but I guess they got spun a convincing sales pitch, and the UK maker/seller didn't seem to have any qualms about selling a so-so product with a world brand badge on it. Maybe the USA company saw this as merely a decorative or promo item to help do a bit of profile raising, but they shouldn't have fallen for it. No sour grapes on my part at all, but it just felt all wrong. The guitar is all fixed and back with the customer, and he has just ordered 2 new custom build guitars off me...so in some way it's helped my sales by him buying an inferior badly-playing guitar in the first place.

I am a Martin fan and will pay you HUNDREDs  for the finished product, Jim.

The check is in the mail Lane.

What a generous offer Unc. I'll have to get going on it after I clear it with everyone named Martin!

Permalink Reply by John Sawyer on July 12, 2016 at 11:08am
I agree with the above, this is profiteering at the expense of the company's reputation. Good on you, CBJ for bringing this up.

At the end of the day, all we have is our integrity. 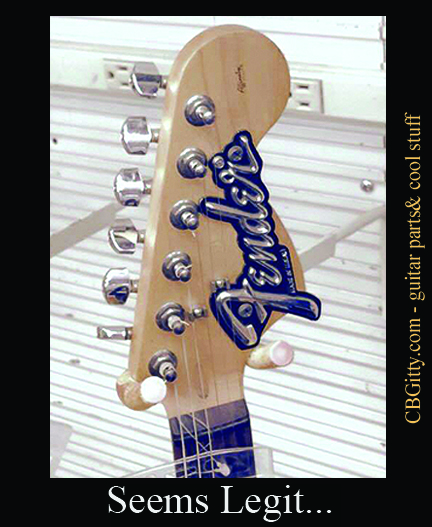 just had a look on ebay ,seems legit but noticed it says last one ,,,mmm

not that attractive either...

"Fancy and pretty."
20 seconds ago

"I am pretty sure that I have not spoken or typed the word 'Awesome' in weeks. …"
1 minute ago

"That shiny one on the left is great!    Justt kidding.  I have made or attemtped an…"
2 minutes ago

Don't You Want Me? (duet with DarnPrettySmile)

"Good to hear you and Reuben.  Sounding good, man,"
5 minutes ago

Old School Blues - from the webpage https://www.reddogguitars.com There is CBGs for sale and more cigar box music#cigarboxguitar #3stringguitar #reddoggui...
5 hours ago
1 Comment 1 Like

"Appropriate Song also for me in the Land Down Under James O, just had a week of rain down here,…"
8 hours ago

""Thanks Ron", the solid body gits are well worth having a go at, have done quite a few…"
11 hours ago