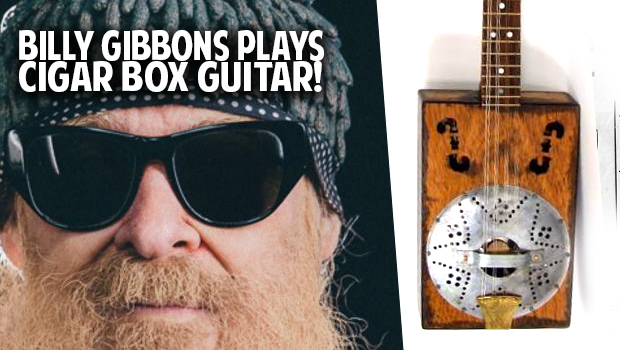 A photo of Billy Gibbons playing cigar box guitar has been traveling around the interwebs for years.  However, have you ever heard the music he was playing?

The photo and audio below in the Youtube video come from The Howard Stern Show, November 11, 2005 when Gibbons was promoting his book, Rock N Roll Gearhead.  According to Stern's official website, Gibbons "pointed out that the guitar he had with him in the studio, which was made of cigar boxes from the 1920s... has only four strings..."

One of the songs Gibbons performed was Ry Cooder's "Billy the Kidd."  John McNair of Reddog Guitars has archived that performance here:

So what is that cigar box guitar that Billy Gibbons is playing?  It's a TurboDiddley made by Kurt Schoen of Schoen Guitars. It was one of several guitars commissioned by Gibbons to Schoen.

In 2013, Emerald City Guitars presented An Evening with Kurt Schoen where the cigar box mastermind showed off a collection of his guitars and other interesting tidbits.  One very intriguing piece was an actual hand-sketched cigar box guitar design by Schoen and submitted to Gibbons for another commission!

Sources:  all sources linked in article. Started by Dan in Performances, How to Play, Lessons, Concerts. Last reply by BrianQ. 4 hours ago. 5 Replies 0 Likes