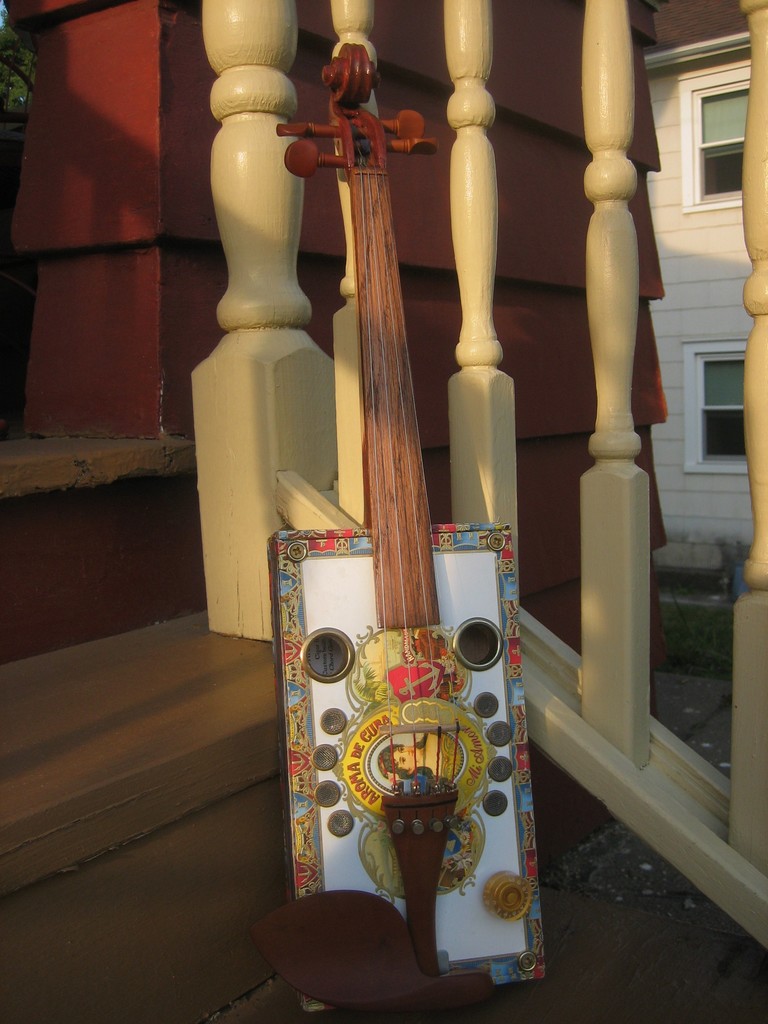 Having made a couple of CBG's and an amp, I decided to try my hand at a cigar box fiddle. I chose an La Aroma de Cuba box I had purchased, because it was the right depth for a chin rest attachment, and very nearly the correct width of a 4/4 size violin. But being four inches shorter than a full-size violin, I had to custom build a neck to achieve the correct string length.

This project turned out to be much more difficult than I had anticipated, with lots or "learning curves" and engineering "work-arounds"! At my lowest point, I had considered tossing away about a week's worth of effort as a hopeless loss, but I thought my way through problem after problem until I had finally realized my dream ... a working and violin-sounding cigar box fiddle!

The first problem came after I had spent two days on the hardest part of the violin, the custom-built neck. Made of a blank of 2" x 2" x 36" poplar, a dense and grainy wood, not easily given to cutting or carving, I discovered that my assumption of a straight-through neck like that of a CBG would not give me the correct angle of fret board-to-bridge for playing. What to do? I had worked so hard carving the scroll volute and digging out the peg box, I wanted to cry to think I'd have to start all over again.

But I figured out how to copy the right angle from an existing violin, and, cutting off the body part of the neck I built, I made a scarf joint and added a new piece at the correct angle. I was now ready to glue the neck into the box.

The next problem came in creating the peg holes. I admit, by now I was getting anxious and in a hurry ... always a bad habit for a builder! I drilled the holes through, but the holes were sloppy and too big, and the pegs weren't lining up correctly. Again, ready to throw the whole thing out, ... until I discovered that a luthier's remedy was to plug the peg holes with dowel rod glued in, and re-drill.

Also, by this time I had cracked the peg box in two places, having made the walls too then, what with all the pressure trying to get the pegs to stay in place during tuning. So I drew careful outlines of the peg box, and created 1/8" veneers to glue on either side of the peg box, over the now-filled in holes, which I then sanded and shaped so they looked intentional to the box.

I was ready now for re-drilling the holes, and this time I bought a tapered round file to carefully enlarge them to fit each peg.

Now it was time to tune it up and play, and all went fine except for the bow would hit the right side of the box when playing past the second position on the E string. The fix was to place an 1/8" shim under the right foot of the bridge, raising the E string just high enough to manage clearing the box. Plus, the sound wasn't right ... the electronics weren't loud enough, and humming. I had a bad wiring connection, which required re-doing the whole soldering job. I also added to 7/8" grommets to the box to open up the sound holes and let out more volume.

Whew! I was about exhausted, and this doesn't mention ALL the problems I went through ... including having ruined the pegs that came with the set I ordered, so that I had to re-order more, but when they finally came the other day, I was so happy to carefull fit them into the peg box, tune up, and begin to play ... I spent a "happy hour" jamming along to Tom Rigney's Back Porch Blues album, using the rod piezo pickup installed under the bridge through my sound system. I am now glad I did it, and didn't give up. I don't know that I'd want to start another one any time soon, but if I do, I will have learned a lot about "how to build a cigar box violin"!

Here are the photos, y'all, for easier viewing.

I was going to just use a tie-bar clip on pickup, but I might have to try the rod piezo in the next one.  I just got gifted an awesome box the other day! 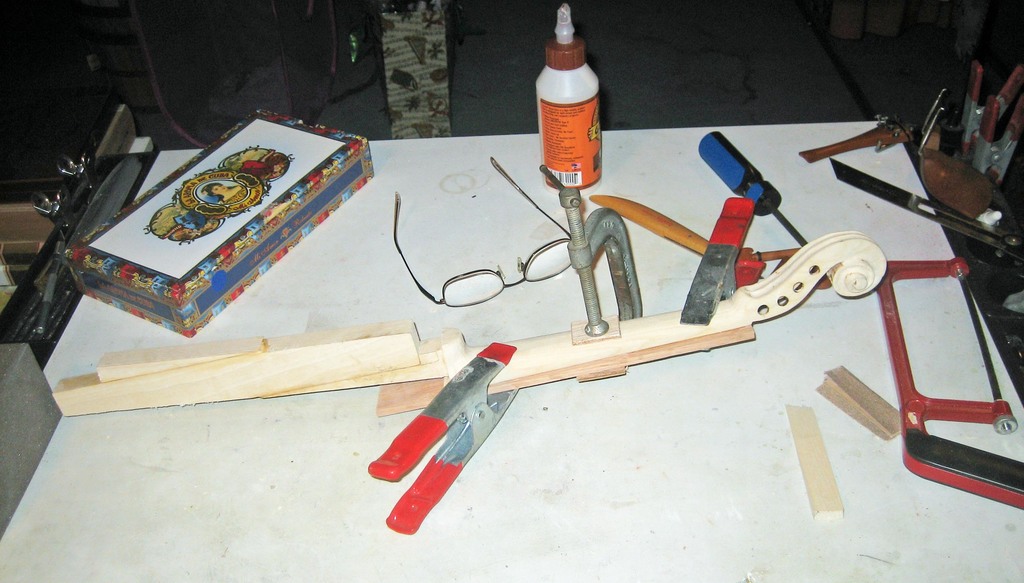 solutions to the problems that you encountered.

Because of the problem of cigar boxes being too short and 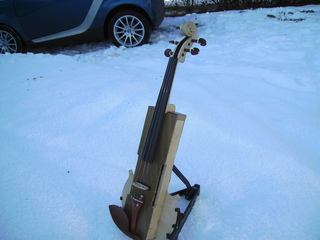 too wide for fiddle playing, I decided to make my own

custom box for my fiddle and used an inexpensive active

Thanks for the kind words ... and I love what you did with yours! I see that you've solved two problems with one stroke ... your cut-outs for the bow double as sound holes, I see!

Yes, the combined cut outs and sound hole idea was one that I came across when researching ideas for the fiddle box and it seems that it is a fairly common construction idea.

Thanks for sharing. You left us some good tips! I'll post some pics of mine when I'm finished. Mine is just a pile of parts right now.

This is my next project! Thank you for the great info!

"This one is fun to play and sounds pretty darn good. These are less is more kind of builds, they…"
57 minutes ago

"Nice build. I really like the neck. Nice job."
1 hour ago

"That looks good and it looks like fun."
1 hour ago