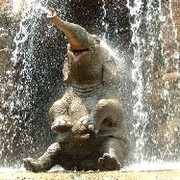 Hi All,
I have built several cigar box instruments, but for the most part, they have been short neck with "through-the-body" attachment to the the cigar box. This simple method has a number of pluses, like not placing a lot of strain (from string tension) on the box and being pretty easy to implement. However, most of my cigar boxes are rather small, and I want to free up the space internally, so I'm trying to build CBGs with a bolt on (or screw on) neck. With this project, I am also adding a relatively long neck (25.75") to provide a 24" scale length. However, I have had some problems with this build with regard to bowing when I tighten up / tune the strings. But before getting to that, let me describe my build some more... First a photo: The neck and head assembly which I used for this project was one I built this past summer and used on a 3-string cookie-tin canjo. But I decided not to bring the whole instrument back with me when I returned home to China, because I was carrying too much other CBG building supplies and related "goodies". So, I detached the can and packed this head/neck assembly along with two others, 12 cigar boxes, and a small supply of red oak and poplar (for building new necks in China) all in one large (and heavy) suitcase. Now I'm all settled at my new flat in China and have been itching to do a new build. So I decided to build a 3-stinger CBG with a 24" scale using this head neck assembly. By the way, this neck and head assembly is was built out of a 30" x 1.25" x 0.75" of pine and it features a straight head (no scarf joint). The head is slotted (4" x 0.5") with a 1x3 set of guitar tuners mounted on one side. The neck is also diatonically fretted using bailing wire. The neck also had no heel.

Next photo: The Neck to Cigar Box Attachment Also, since the neck was not long enough to pierce both sides of my 9" long cigar box, I decided to screw-on the heck to one side of the cigar box. To do this, I first reinforced the neck side of the cigar box with a 5" x 1.5" x 3/4" piece of poplar; which I glued into the box, clamped down and let dry over night. Before gluing though, I cut a slot in this block of reinforcement wood (and through the side of the cigar box) to receive the end of the neck. This I secured into place the next day with three longish wood screws and additional wood glue. I also added a piece of wood perpendicular to the neck (and parallel to that piece of poplar wood) that I glues and screwed to form the bottom of the pocket containing the neck. For good measure, I sunk a screw up the length of the neck from this bottom piece. So, in all, I have six wood screws holding and wood glue holding this neck in place. I guess I'll have to draw a diagram to make this clearer. (See diagrams below.)

Anyway, it was looking nice and straight until I decided to add the strings and tune it up. Then I notice the neck bowing in relation to the cigar box such that the action (how far the strings are off the neck) was much higher than intended at the point where the neck meets the cigar box. If I release tension on the strings the neck will go back down and the strings will lay flatter.

So, to fix this problem, I cut out a triangular piece of poplar wood about 4.5" by 5" by 1.25" and 0.75" thick to use as a "heel" on the base of the neck. As my original design had no heel, so I thought the easiest way to fix the problem was to add a heel. So, I clamped down my instrument with the fret-side down, using another long stick of wood and 2 clamps to hold the cigar box tightly down to the table and this eliminated the bow in the neck. I then pre-drilled three holes for 3 different length wood screws and then screwed the heel into place (i.e. heel to neck), and then I used a 4th screw which I was sank diagonally through the heel into the cigar box and the block of poplar wood which supports the side from behind. It's this 4th screw that prevents most of the bowing. When I un-clamped the instrument, the neck was pretty flatly lined up with the cigar box, which was my intention. When I tightened up and re-tuned the strings, there was much less bowing, although there was a little. The bowing is not so bad, so I think I'll let this prototype cigar box guitar "pass", at least for now. Now to play it to see how it sounds.

Here are some diagrams to illustrate how I went about attaching the neck to the cigar box body: 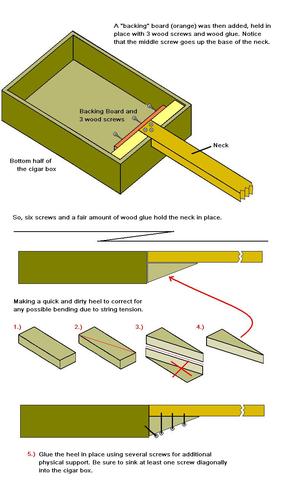 It's pretty much self explanatory. If you have questions, just add to this post.

In the meantime, I need to research how to do a cleaner head/neck-to-cigar box attachment. I might even sacrifice another cigar box and recycle this same head / neck assembly to do it with if I can make it work and look better. Right now, my heel fix is quite ugly.