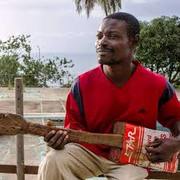 He is blind and his guitar is an old oil can, but the world will soon know him.

Born Weeseh Freeman, Liberian artiste Weesay went blind in 1998, aged 23 but that did not stop him from living his dream of becoming a celebrated singer.

Using an old oil can, a piece of wood and a number of wires, Weesay designed himself a guitar and learnt how to play it, first on Monrovia streets and now to millions of online audiences.

His music is like his guitar; rough on the edges but sounds great.

His rise to fame came when a popular brand of chips asked him to sing a jingle using his tin guitar.

A video of the performance was uploaded online and it has so far, gained more than nine million views and a number of well-wishers offered to buy him a guitar.

He now has several guitars but still loves to play the one he made himself.

“I know that I am not a small person-God made me to do something,” he said in an interview with Ssebo.

This group does not have any discussions yet.

You need to be a member of Weesay Fan Club (Wesseh Freeman, the Liberian gas can guitar master) to add comments!

Comment by Mike on March 21, 2015 at 3:08pm
Awesome Shane what you did for him and his reaction. That is really nice to see somebody do something so nice for somebody else that they do not even know.

I like the simplistic rusty nail tuners and what beautiful music that can be made from such a handmade guitar. Awesome!

Wow, Weesay, you are the best! Love what you are doing. Love that guitar. Wow!

such pure beautiful folk music love it, keep on playing my friend from your heart! Jim

Comment by Mike on March 13, 2015 at 11:36am
Th video of him singing his chips jingle is one of my favorites that I have found after I discovered about all of this not long ago. I have shared it with many people. Love it....

"GREAT! Would love to see a vid of this"
4 hours ago

the anonymous pick commented on Stephen Sell's blog post How to add photos?
"Congrats  Cindy . it worked ;-)"
5 hours ago

"Thanks Keith ! appriciated !"
5 hours ago

"Thanks Kale !for your message conformation ! appriciated !"
5 hours ago

Taffy Evans replied to Mel Cooke's discussion Is it OK to use a hardtail bridge on a fretless 3 string acoustic?
"Hey Carl, I modified the computer chair. Haha. Taff"
7 hours ago