So Shane Speal asked for 2-3 paragraph “histories” on his antique gas can Guitar, with the submission deadline being tomorrow. So early yesterday morning, I couldn’t sleep, read his e-mail, and in…Continue

Met this cat a week ago in the restroom of The Patio on Richmond bar next to The Pit Room barbecue joint, where I was catching up with some old high school buds I haven't seen in 30 years. He claimed…Continue

This showed up in my Facebook feed this morning. Check this guy and his bamboo instruments out! He's definitely got the DIY vibe:…Continue

How To Map Your Fretboard, For Any Tuning, With Any Number Of Strings

How To Map A Song In 6-String Tablature To 3-String ChordsWARNING: Long post ahead! Read only if you wanna learn something!A couple of days ago, one of our newer members, Russ Oakes, put out a…Continue

Ron "Oily" Sprague left a comment for Chris DiStasio
"Chris, ‘Did I ever get back to you about the amp stand / sound enhancer? I can’t remember. If not, PM me your e-mail address, and I will send you the PowerPoint I made up that shows all the dimensions I worked out. Oily"
Feb 19, 2020

Chris DiStasio left a comment for Ron "Oily" Sprague
"Hi Ron, I read one of your posts describing the amp stand/ sound enhancers you built. Wondering if you still have dimensions you can share? If so i would greatly appreceate if you can send me a copy to cdistasio@hotmail.com Thanks so much! Chris"
Dec 5, 2019

How did you learn about Cigar Box Nation?
Beetlejuice McNair...it's all his fault...he told me to come here...

How many instruments have you built so far?
2

What do you find most interesting about cigar box guitars? (If you do not enter something meaningful here, your membership may be rejected).
Playing them.

New lyrics - "As The Worm Turns"

As The Worm Turns (with apologies to Dr. Suess, Robert Service, Rudyard Kipling, and soap opera TV)The twangers and bangers did all gather roundTo cuss and discuss the details of their sound.But one thing that stumped both the bright and infirmWas the why and the which of the turn of the worm.While some scratched their headstocks, and others their nuts,The rest filed advice couched in ifs, ands, or buts."No skin off my nose," said the one with thick derm,"I don't give a damn 'bout the turn of the worm!""I've never had failures, I've never had breaks;This ain't like the Parsi Man's dreadful mistakes.I just pops 'em in 'til they stand proud and firm -Who cares how the string meets the turn of the worm?"But then from the back of the crowd of onlookersA small wispy voice hushed the sinners and hookers:"My name is Twice Twister, from Hole-Under-Berm;You must all heed my warning 'bout how turns the worm!"The fiddle-dee dermed one, whose nose was unskint,Found his smiling face freezing, somewhat set like flint;The Twister's alarm gripped his ears like a germ,With its repeated rubric of how turns the worm:"The string should swing sweetly, inside of the post,And go through the hole like a Z, not a ghost,While the wraps should wrap downward, not curled like a perm,So the gear, with less stress, teethes the turn of the worm.""Therefore, the post should stand both firm and proud,But nearest the nut," intoned Twice to the crowd,More ingenious than Pratchett's famed Leonard of Quirm:"The key must be headward to help turn the worm."The flinty-faced fiddler, that seller of song,Of how it don't matter, that there was no "wrong,"Responded, half-hissing, full-hoping he'd squirmWhile he twisted Twice Twister's turn-tale of the worm:"Mister Twister," he said, "if what you say is true,Then please explain why my way works like it do,For it violates every Twice Twister term;It simply don't matter which way turns the worm!"Like a tennis match, back and forth, all day it went:The Twisting of Twice Twister's calm argument.But adamantine, like a rock he stood firm,Awash in the current of how turns the worm.Toward sundown, Twice Twister produced a necked box,And proceeded to twist on some strings, in his socks;As the twang tension mounted, the hookers did squirm,For they'd intimate knowledge of the turn of the worm.Then he handed it, tuned, to the treasonous oneWho, crowd-tempted, tried to twist Twice for fun.Twice silently motioned him notes to affirm,Thus playfully testing his turn of the worm.The fiddlestick four-flusher sourly complied,Wondering what trick might be hiding inside.But the notes jangled tuneful, without any SturmOr Drang to destabilize Twice Twister's worm.Abashed, he handed the box back to Twice,Who proceeded to bend, hammer on, slide like ice.The lesson thus learned, it was his turn to squirm,As he choked on his diet of Twice Twisted worm.

Chris DiStasio said…
Hi Ron, I read one of your posts describing the amp stand/ sound enhancers you built. Wondering if you still have dimensions you can share? If so i would greatly appreceate if you can send me a copy to cdistasio@hotmail.com


Thanks so much!
Chris

woops , we`ll know better next time , just got a bit excited , thanks for the advice

Ron I think I got it: on May 10, 2016 at 1:51pm Wayfinder presented the link http://www.cigarboxnation.com/forum/topics/how-to-make-a-license-plate-pickup and a good deal of the general discussion took place there: now the whole thread has disappeared.

Ron, maybe you remember: as Wayfinder presented his first diagram, I posted that this as described could not function, I remember your answer like «that's the way engineering functions»; your answer I didn't find neither on the forum.

Ron hi, as I reread the posts on «How is this done», after May 10, 2016 all my posts have disappeared. I remember having insisted asking why the shrink wrapped thing sits where it sits aligned underneath the bridge between the magnets and supposed its core be of soft iron which got an answer from a techie that this be plausible.

Ron, the reason I posted part of the interview of the Lace brothers: Wayfinder claimed there's no proof Rogowski had the idea about low impedance pickups already in the seventies but possibly based his post from 11/18/2007 on Lace's Alumitones: who is this guy to challenge the intellectual integrity of Rogowski without any reasons?

Two more short stories put in a new blog. The first one is my fave story to date. I apprecate contstructive criticism and corrections.

Got some nice builds going on, like the fork tail piece. 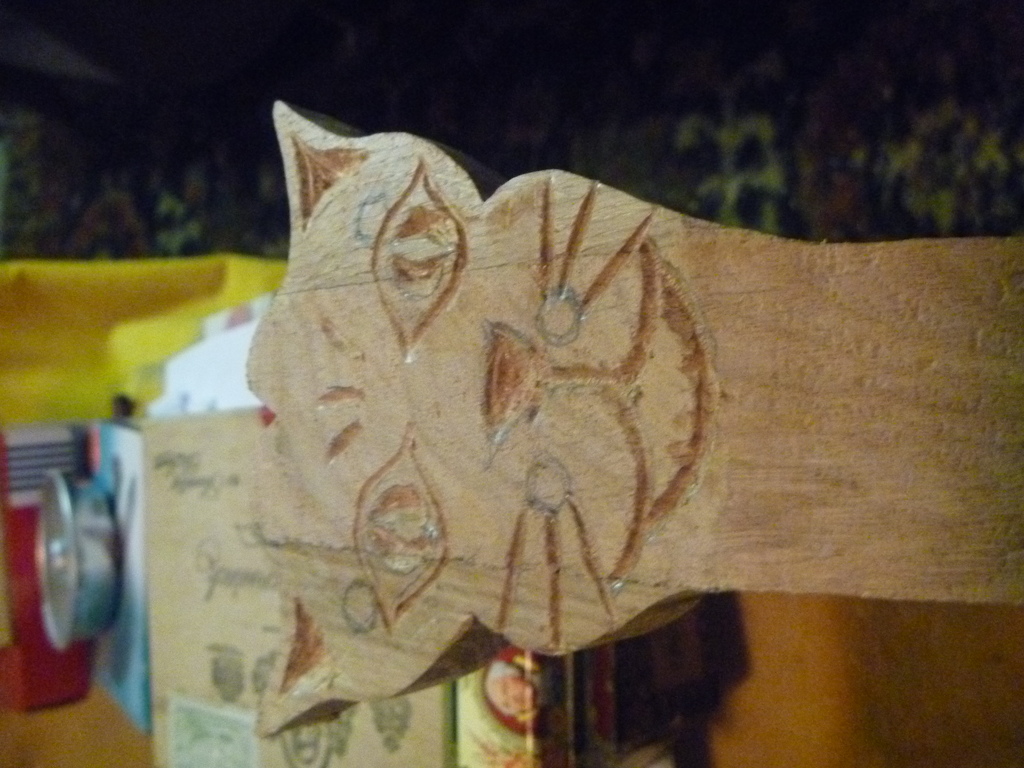 How Funny can you get!! just working on a new one, and what do you think the headstock looks like? its not done yet ,but the meaning is there!

Back In The USSA! You Don't Know How Lucky You Are

Welp, our time in the Sandbox is coming to an end. As of Nov 17, I was "retired" at age 57 from the company I've been working for the last 14 years. This is a big deal here, because 1) I'm not ready to retire, and 2) we are losing a) the relatively nice home we moved into in April, and b) our community in which we are so heavily involved in Theater, baseball, quilting, chorale, church choir, my wife's service sorority, her job as a librarian at the nearby elementary school (today is her last… Continue

Look For The Civil War Commemorative Album This Fall!

2) That the earliest known engraving or picture of a cigar box instrument shows two Union soldiers sitting in camp, one of them playing a homemade fiddle made from a Figaro cigar box,

I found this announcement from late July this summer particularly interesting:…

Sometimes, It's More Than Just A Stick In A Box

Well, my wife really surprised me! She left today for Vegas for a girls' weekend with her old sorority sisters from Houston, but before she went, I was telling her about my ultimate acoustic guitar lust object: a Taylor 914ce acoustic-electric Grand Auditorium, Venetian cutaway, Indian rosewood back and sides, Sitka spruce top, abalone rosette and purfling. I had seen a flawless used one at GC last week for $2899 ( new they are almost $6 K). She said, "Well, you never ask for much, and you did… Continue

Writer's Block, or What To Expect When You're Expectorating

So, sometimes, I can't write a lyric for spit. Other times, they just seem to flow through me, like the bad chicken burrito you had for lunch from the little street cart.

One of the ways I deal with it is to play with words and word order. For example, I like to start with song titles, but frequently, the Aether has other ideas, and sends me single lines, as images. One of these just popped into my head on seeing the CBN Group title, The Blues Exchange. First, I ran that all… Continue

Started by Ozz989 in Performances, How to Play, Lessons, Concerts. Last reply by Taffy Evans on Friday. 11 Replies 0 Likes

"Glad to hear you enjoyed it t-belly! We will try to keep them coming."
2 hours ago

"I haven`t heard that in years! Brilliant!"
4 hours ago

"The Kazoo king is back! I`m torn between the two to be honest but I`d like to hear 5 or 6 parallel…"
4 hours ago