What did YOU do this weekend?

It all started on Thursday night.

I'd corralled a couple of friends into coming to see Hillstomp, from Portland OR.  Those boys flat out kill it!  Henry playing the banjo, guitars and cigar box guitar, John playing the "drum" set (which is cobbled together from old radiator parts, plastic buckets, maybe a legit drum or two, and a shitload of duct tape).

Got to talking about 2 man bands, and the possibility of my two-man band opening for them.  So, we'll see what the future brings on that front.  Also had him sign my cigar box guitar.

Now, I had to be halfway across the state in two days for a gig, and rather than drive all at once, I decided to break up the travel time by going from Denver to my parents house in Gypsum.

I didn't really want to make this drive, either, due to a rather sizeable hangover on Friday morning.  But, I'm glad I did.

I'd just happened to read the paper, and find out The Cedric Burnside Project was playing a free show in Eagle-Vail, which is about a half hour's drive east of Gypsum.

Cedric is a pretty decent guitar player, but when he gets behind that drum kit, man, watch out!  By far one of the most natural people I've ever seen drum, and he does it with a smile on his face the whole damn time.

Well, during one of his set breaks, I asked him to sign my CBG, as it was still in my car.  He said sure, go grab it, and then we can jam.

I think my heart skipped a beat there.  Cedric Burnside, who has jammed with so many people (including his grandfather R.L.) just asked me to jam with him?  Man, I've been nervous before gigs before, but this might have been the most! 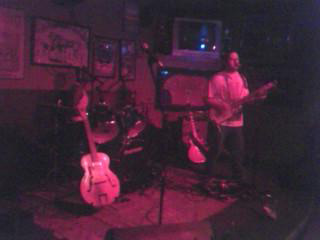 We ended up playing two tunes, which I (for all intents and purposes) learned from R.L.: Rollin' & Tumblin'/Indian Blown Whistle and Shake 'Em On Down. 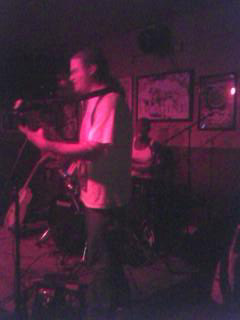 I honestly thought he was gonna sing (and I wouldn't have to!), but after a few bars it was apparent he wanted me to.  Holy shit, I was under pressure!  But after I sang a few verses, he sang a few, and we ended up trading verses on both songs.  I had a huge shit-eating grin on my face all night... hell, I still do today! 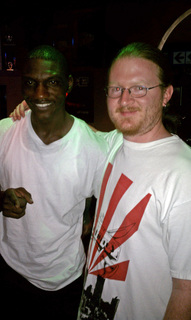 What a cool guy.

And, a while after I'd played with him, I happened to notice a strange tingling in my fingers. 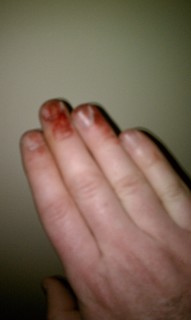 (I'd always, in a perverse, abusive way, hoped to play so my fingers bled during a show.  I've played some half hour shows, and nothing.  Jamming two songs with Cedric was all it took!)

The next day, I began packing all my gear in preparation for two gigs in Grand Junction.  I pulled out my Hill Harp... 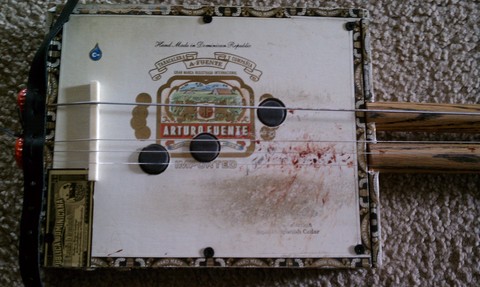 Today I was going to sit in with my buddies, Flat Top Reed.

Our first show was at an Earth Day celebration.

Well, evidently, the Earth wanted to it rain that day, all damn day.

But it was fun.  I even got to meet Sharecropper from here on Cigar Box Nation.

Then, that evening, we got to open for T-Model Ford.

I can't even begin to tell you how cool and down to earth that man is.  He showed up at the venue around 7, 7:30, said "it's Jack Daniel time!" and hung out with us until our set started.  He was hanging out in the bar (not back stage), talking with anyone and everyone who came up to him.  Seemed to be grooving to our set, too.

Then he gets on stage... man, I'm telling you, at 90 some years old, 2 strokes and a pacemaker, he can outplay a lot of cats, and his voice is still so full of power.  His music was great, but I think I value his stories even more.  SUCH A COOL GUY!  I wish I had a tape recorder on me the whole night.

I remember him telling us he had 26 kids.  My buddy said, "wow you musta been busy!"  He looks over and says, "I'm still busy!" If you EVER get the chance to see him perform, please do yourself a favor and SEE HIM!

Been checking out T Model and Cedric B.'s videos on YouTube... SWEET indeed! I'm sure you had a blast opening for and playing with these guys -- your stuff is right up their alley!

Saw one of the Burnside grandkids (Duwayne, I think) at Ziggies in Denver maybe a year ago. Great band with the Burnside vibe.

I saw him play on the Robert Johnson tour with Big Head Tod. He IS very talented, but then again, it is in his blood!! Glad you had such an awesome time. Those periods in our lives come along so infrequently, so ya gotta enjoy the heck out of it when it happens.

Comment by JonBouye on April 25, 2011 at 10:14pm
All in all it sounds like one  of those weekends you live to tell your grandkids about. Good times make better weekends and great memories. Glad you had a good'n.

Started by Dan in Performances, How to Play, Lessons, Concerts. Last reply by BrianQ. 18 hours ago. 5 Replies 0 Likes

"Sounds great to me Lappy!!"
2 hours ago

BrianQ. replied to Engblom's discussion Anyone with experience in 1-3-1 tuning?
"Actually it’s 1-5-8 because the high string is an octave higher, but CGC is still a 1-5-8…"
2 hours ago

Engblom replied to Engblom's discussion Anyone with experience in 1-3-1 tuning?
2 hours ago

Most seem to tune their CBG to 1-5-1 (for example GDG, EBE, DAD). As I have understood this tuning…See More
3 hours ago
2 Comments 0 Likes

"Thanks for honoring one who has made a difference in your life A.D.! May Wes Rest In Peace."
8 hours ago

"Groovin’ as usual A.D.! Pretty revved up on this one."
8 hours ago

"Rich!!! Thanks for treating us Korrigan."
8 hours ago

"Thank you Kale! Some of the Christmas songs are a challenge to play and sing, fortunately for us…"
8 hours ago