Watch this first. Or not.

Little Albert trudges westward up the winding pathway to the burnt out ruins of the old Doo Dah place, periodically stopping to adjust the load on his back, nervously glancing over his shoulder at mist-enshrouded Camptown Village falling further and further below him, the sun just beginning to cast a slight glow over the low eastern hills.

Encouraged now, courage rising up from the depths of his guts, he makes his way closer and closer, and closer still, to that grim and foreboding weed-choked shell of a... house?

A building once, yes, perhaps even a house, most certainly it is no home, unless the... but, no.

Best not to even think of that, unless he is to lose all resolve and tear back down the mountain, back into the stifling embrace of the village and the warmth and safety of Uncle Johannen's cottage.

He is there now, actually there, and he draws in a deep breath and... freezes.

He can feel them, the eyes, and they are like glowing red coals set in grim grey stone and they bore right into his skull into his brain and all his desires and demons are exposed to a thing which is not there but is there all the same.

In the light of the early dawn, a shivering Kristoff Bugg makes his way to his cozy little junk shop, periodically stopping to root through the neighbors rubbish bins, collecting in his big brown sack a: rusty colander with broken handles, two old door knobs, a large black broken hinge,  assorted cracked buttons, a piece of the true cross, two wine bottles, a tooth of the Buddha, and a small wooden tobacco box with no lid.

He passes close by the Johannen place, making a quick check to see if Little Albert is up, but seeing no signs of life he scurries on by.

Almost there, he is briefly waylaid by, of all things, a dark blue dog in an old felt hat... a dark blue dog gnawing on an old harmonica... a harmonica which Bugg tries, and fails, to "borrow."

Safe at last in his shop, Bugg stokes a roaring morning fire and puts on the kettle, enthusiastically stuffing leftover curry into his mouth as he sorts through his sack of treasures.

And all of a sudden he starts up with a shiver, realizes he has dozed off, yet some thing has awoken him, some... vibration?

Chilled to the bone despite the still burning fire, he slowly creeps to the window and, with great trepidition, peers out the window, then pulls back in shocked disbelief, his large eyes bugging out of his skull.

The entire mountain, all of Mount Stogie, is vibrating.

Madog ap Patraig glances behind himself, trudging down the street, cursing under his breath "Damned mutt!" as the mangy cur has followed him about this odd little foreign village ever since he has arrived to visit his old friend Johannen... and that odd nephew... "and really, doesn't that dog have to much of the wolf in it? And why the devil is it wearing that pocketwatch around its neck?"

Picking up his pace, he strides purposefully towards the village square,ignoring the plaintive awooing sounds behind him, and... all of a sudden, he is thrown off his stride, stumbling into the side of a nearby building, vertiginous waves of sound pulsating through his body.

In a flash, the watch-wearing mutt darts forth and snatches Madog's large packet of steaks and races down a nearby rabbit hole.

Johannen the Hatter...  Uncle Johannen to all the youngsters of the village... sits on an old crate out in the cold of his shed and waits patiently for his profane heater to warm up.

He sees that odd little trash collector with the giant eyes walking by and crouches down beneath the unshuttered window.

He has squeezed nearly half a mugful of lukewarm coffee out of his nightcap, the result of his wife Lyndt dumping it on his head because he was, as usual, early to bed and late to rise.

Casting a glance from side to side, he reaches into the crate and pulls out a small flask and empties its contents into his mug and gulps it down and burps and sighs with satisfaction and...

The crate he is sitting on shatters into shards and his mug fragments and explodes and the profane heater barks like an angry gang of rabid squirrels attacking a nut and a warping wave of sound passes through his bones and a bearded giant yelling about some "cursed mutt" crashes right through the wall of his shed and...

Out in front of the old Camptown Distillery, perched on a granite outcropping of the eastern hills, Vinnius and Theodoric sit close to a small coffee-heating fire, smoke rising up out of the bowls of their long-stemmed pipes.

"Think me gonna have some more."

"What in the red heck is that?"

"Looks like a bunch of sound waves comin' from the old Doo Dah place."

"Good thing we ducked and covered"

And amidst all of the turmoil a little kitty cat calmly sits atop a stone pillar in the town square and simply purrs. 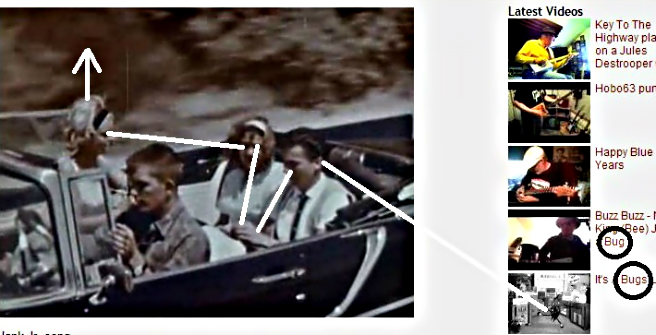 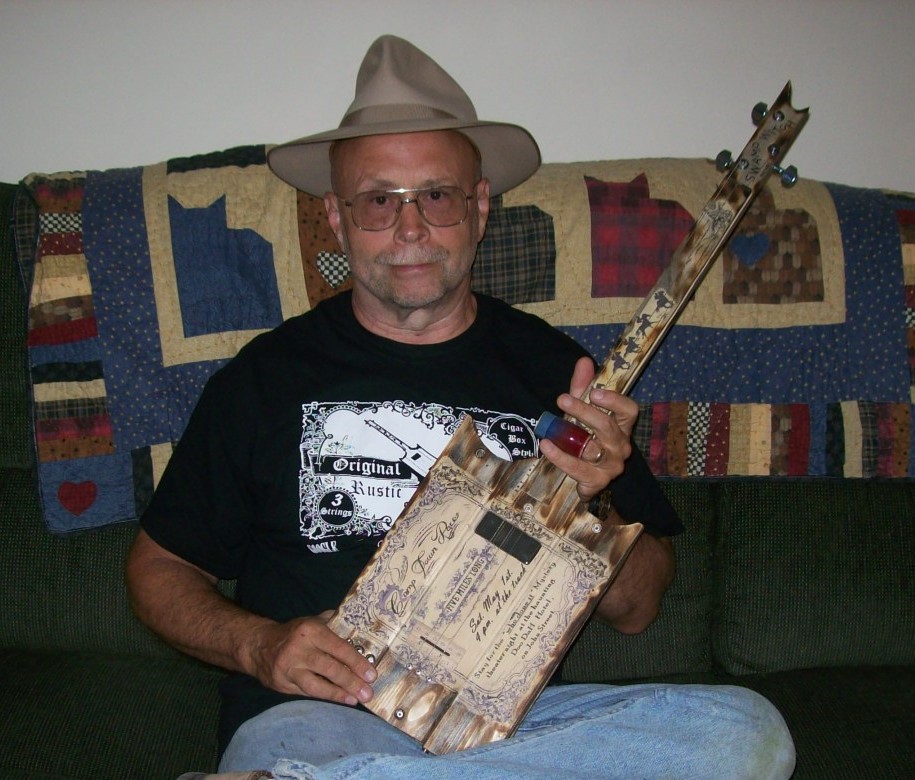 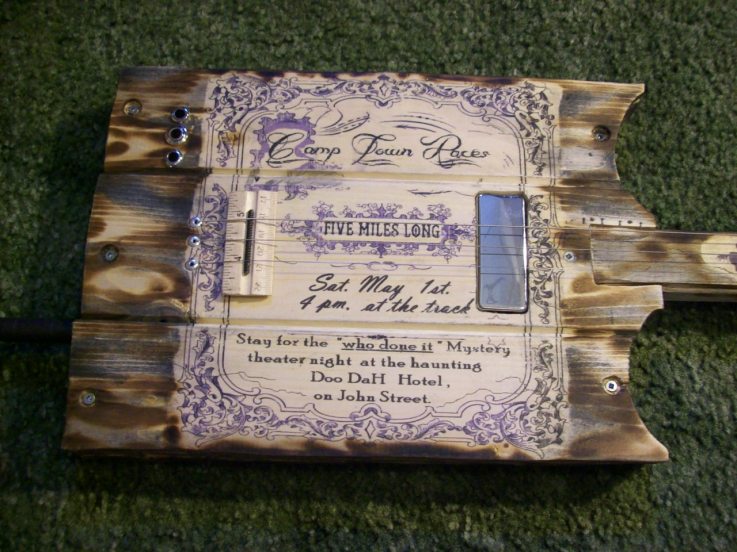 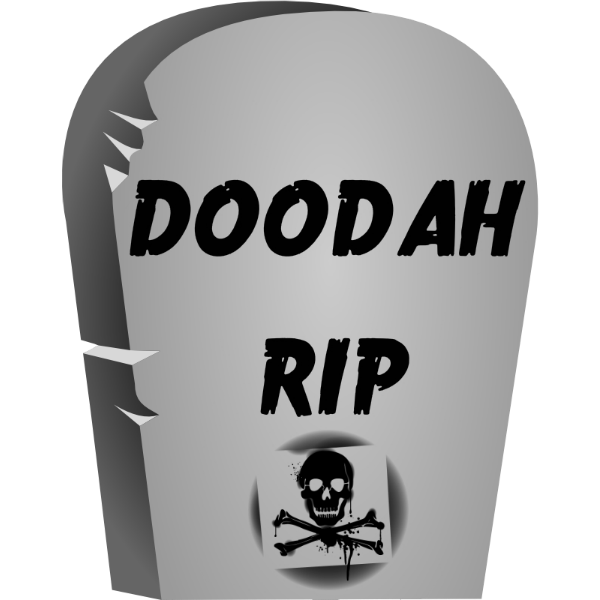 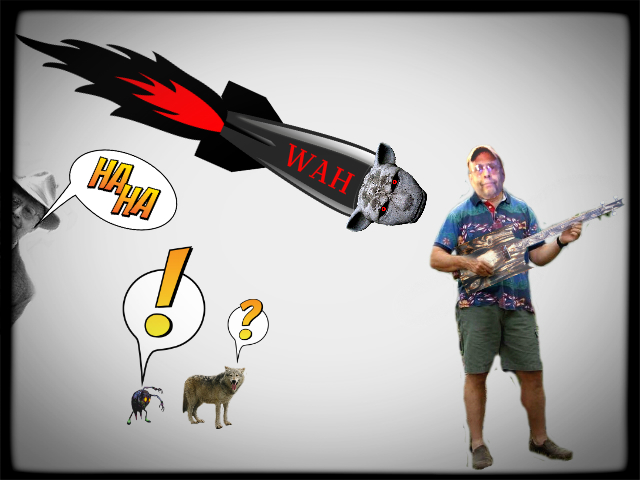 Started by Jerry Draper in Performances, How to Play, Lessons, Concerts. Last reply by BrianQ. 1 hour ago. 5 Replies 0 Likes

BrianQ. replied to Larry Sobol's discussion Aluminum License Plate in the group Building a Cigar Box Guitar 101
"Larry, good news, pretty much all modern license plates are aluminum. And yes you can ghost a…"
2 hours ago

Mike Simpson left a comment for Billy Eggart
"Hi, are you interested in our Sacramento CBG builders zoom meeting? If so let me know 916 519-8612"
3 hours ago

t-belly johnson replied to Jerry Draper's discussion Piezo feedback
"Pre amp is certainly the best way to cure feedback but you can try covering your piezo in leather!…"
5 hours ago

Korrigan replied to Jerry Draper's discussion Piezo feedback
"I can't really give you a specific recommendation, since I really hate piezos (I'm a…"
5 hours ago

Jerry Draper replied to Jerry Draper's discussion Piezo feedback
"Thanks Kerrigan. Can you recommend a preamp for CBGs?"
7 hours ago

Korrigan replied to Jerry Draper's discussion Piezo feedback
"A preamp is you best bet for taming piezo feedback."
8 hours ago