The Best Jugs in Kentucky Are Empty

Since I’ve been involved with the homemade musical instrument community, I’ve noticed more and more coincidences in my life. I’m not sure if they’re happening more often or if I’m just more attune to them, but I’ve noticed increased synchronicity over the past year or so. Here’s another fun coincidence that happened recently. I wanted to share it with the Cigar Box Nation.

About a month ago, a book about jug bands showed up in my Amazon feed. I’ve always thought jug bands were interesting, but never really took the time to learn the history of this music style. I decided to buy the book and it arrived a couple days later. I set it on my bookshelf not sure when I’d get around to reading it. As luck would have it, I had plans to visit a buddy in Phoenix the first weekend in September. I brought the book, Louisville Jug Music: From Earl McDonald to the National Jubilee by Michael L Jones, along to help pass the time.

I finished the book that weekend and it was a really good read. I did not realize how much jug music influenced other American musical styles or where it came from. Not only did I learn a lot about the past, present, and future of the genre, I also discovered there is a National Jug Band Jubilee which takes place in Louisville, KY every year. Coincidentally, the event was happening the following Saturday, September 14. I told my wife about this string of coincidences and she said, “It’s a sign. You need to go.” I made some quick travel arrangements and before I knew it, I was on my way to Louisville. I arrived at the Jubilee shortly after the first band took the stage on Saturday. 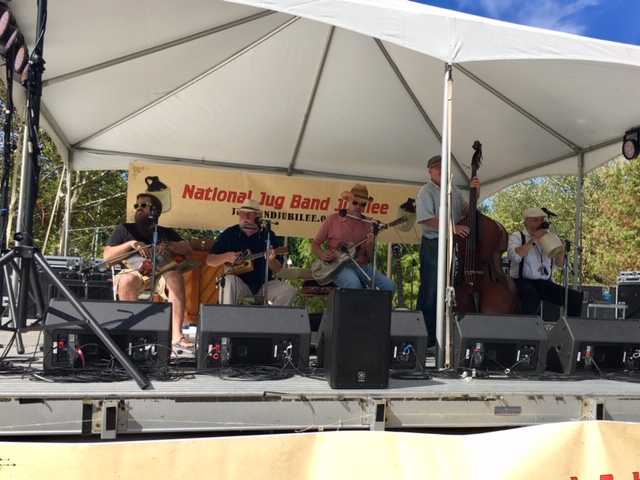 The first thing I did was visit the merchandise table to see what kind of swag they had for sale. After purchasing a T-shirt and a bumper sticker, I noticed Michael L Jones - the author of the book I mentioned above - was sitting at a nearby table eating lunch. I walked over and told him about the series of coincidences that brought me to Kentucky. He grinned ear to ear, signed my book (which I just happened to bring with me), and welcomed me to the festival. I sat down in the grass and watched a handful of artists deliver some lively performances. The musicians played instruments like banjos, kazoos, washtub basses, washboards, guitars, and, of course, jugs. I even spotted a cigar box ukulele on stage. 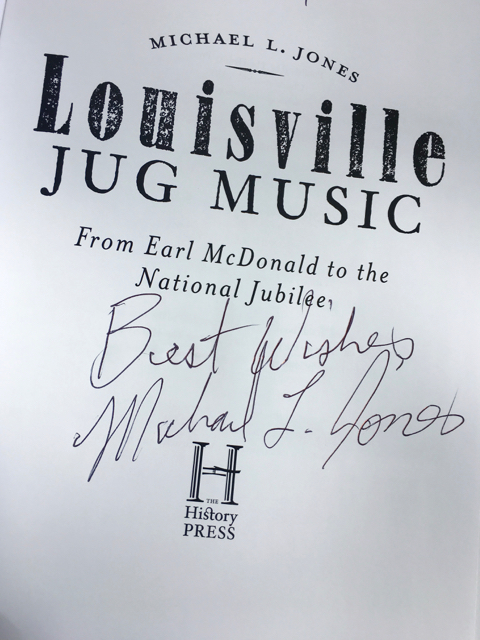 At 4:00 PM the music paused and there were free jug band instrument classes. Led by known performers, these sessions focused on the basics of playing the jug, bones, kazoo, and washboard. They all appealed to me, so I had a hard time deciding which one to attend. I ended up at the jug playing workshop led by Arlo Leach. After one class and a little bit of practice, I’d say I’m still a novice jug player at best. Regardless, it was a lot of fun and I learned something new. At the conclusion of the classes, all the students took the stage and performed a song for the audience. I thought about how many coincidences led to this moment. Just one week ago I knew virtually nothing about jug music, and yet here I was playing a plastic milk jug on stage at the National Jug Band Jubilee. It was quite an experience to say the least.

That's me playing the jug (circled in red) 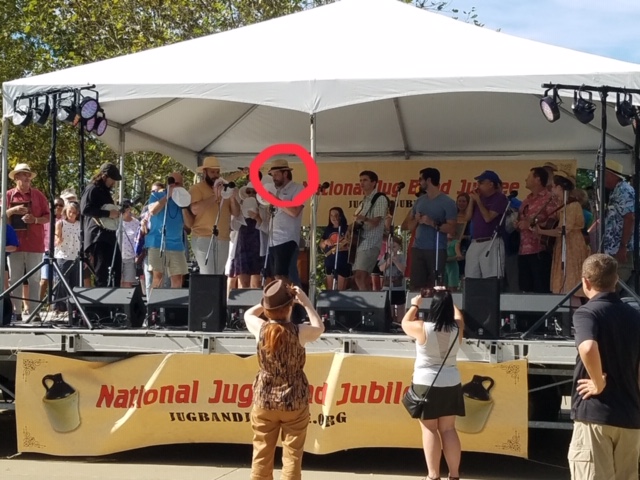 As the sun dropped towards the horizon, I watched the rest of the performances and found myself consistently entertained. The musical acts were great and so were the festivalgoers. The crowd was a mixture of folks from all age groups and walks of life, but everyone was in a good mood. It was an uplifting day and one I won’t soon forget. After returning home, I found myself digging through the recycle bin looking for empty milk jugs or water bottles I could blow into. I spent the latter part of yesterday checking my local antique shops for vintage whiskey jugs. I chuckled a bit when I realized I’m probably the first guy to come back from Kentucky and look for empty whiskey containers. I’m sure that doesn’t happen every day.

Very cool story, funny how some of life's curves turn into a nice twisty road. Also remember some of the best jugs come in pairs!

Thanks for sharing, very interesting story. Here's something you may want to see.Bottle Boys

"Wow, Slingers.  Doug and his pastor wrote a very good praise song that has elements of an old…"
44 minutes ago

"Vinnie, it is really good to see and hear your loopy self here. A pleasure.  And you are…"
46 minutes ago

Tales from the Swampside - The extended John Bolton version

BrianQ. left a comment for Maree
"Welcome, check out the Resources tab for build/play info and join some groups located in the Posts…"
2 hours ago

BrianQ. left a comment for Billy Pigg
"Welcome, check out the Resources tab for build/play info and join some groups located in the Posts…"
2 hours ago

BrianQ. left a comment for Lisa Frandsen
"Welcome, check out the Resources tab for build/play info and join some groups located in the Posts…"
2 hours ago

BrianQ. left a comment for Richard Kenyon
"Welcome, check out the Resources tab for build/play info and join some groups located in the Posts…"
2 hours ago