This is one of those stories that you just can’t make up. It happened yesterday afternoon and I felt the need to share it with all of you. I was sitting at the computer watching some videos on Cigar Box Nation when my dogs started scratching at the back door. I let them out and thought to myself, “how long has it been since I fed the chickens?” I decided to go check, so I slipped on a pair of flip flops and headed out to the coop. I decided to top off their water and as I was dragging the hose over, my wife came outside to tell me she was going to get her eyebrows done. I’m not even sure what that means, but I nodded and she was off.

I fed/watered the birds, did a few other miscellaneous tasks, and then headed indoors to resume my video watching. When I attempted to go inside, I realized my wife had accidentally locked the back door and stranded me in the backyard. My keys and cell phone were inside the house. Our property is surrounded by a 7' privacy fence with two locked gates. My first instinct was to call her but wait… I don’t have a phone. My neighbors have a key, so I could call them but wait… again, no phone. I don’t have the keys to open either gate, so I can’t go around to the front and check the front door. I guess I could climb the fence and walk to the neighbors but… I’m wearing flip flops and shorts. That doesn’t sound like a good idea. Besides, I’m not even sure if the neighbors are home. Ugh. I’m stuck. Well, at least the workshop is in the backyard. I figured I could start working on a new project to pass the time. Ironically, I had just bought an old motor oil can earlier that day. I wasn’t sure what I was going to make with it but it was only $5 so I grabbed it and set it on a shelf in the workshop. I picked it up trying to decide what I could make with an oil can. A fuzz pedal? No, I don't have the right transistors. A tiny amp? Nah, I'm missing the LM386 chip. Hmmm. Then it hit me. A couple weeks back, I bought one of those pre-fretted canjo necks from CB Gitty with the idea of making a cigar box dulcimer. I had set it aside due to other projects, but I rummaged through the parts pile and found it. “Time to make a canjo,” I said to myself. 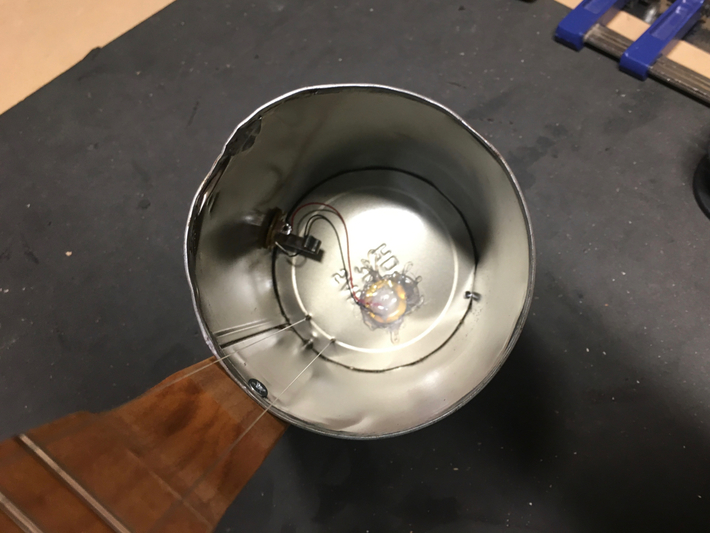 I started looking though the rest of my parts and realized I had everything else I needed, 2 long shaft tuners and a handful of screws. I didn’t want to make this a traditional single string canjo, so I decided to build a two stringer. I drilled a second set of tuner holes through the headstock, cut the nut and bridge notches, and then slapped a little stain on the neck. I let the stain dry for 15 minutes or so before I mounted the tuners and nut. Unfortunately, my phone was locked inside the house so I don’t have any pics of the build process. 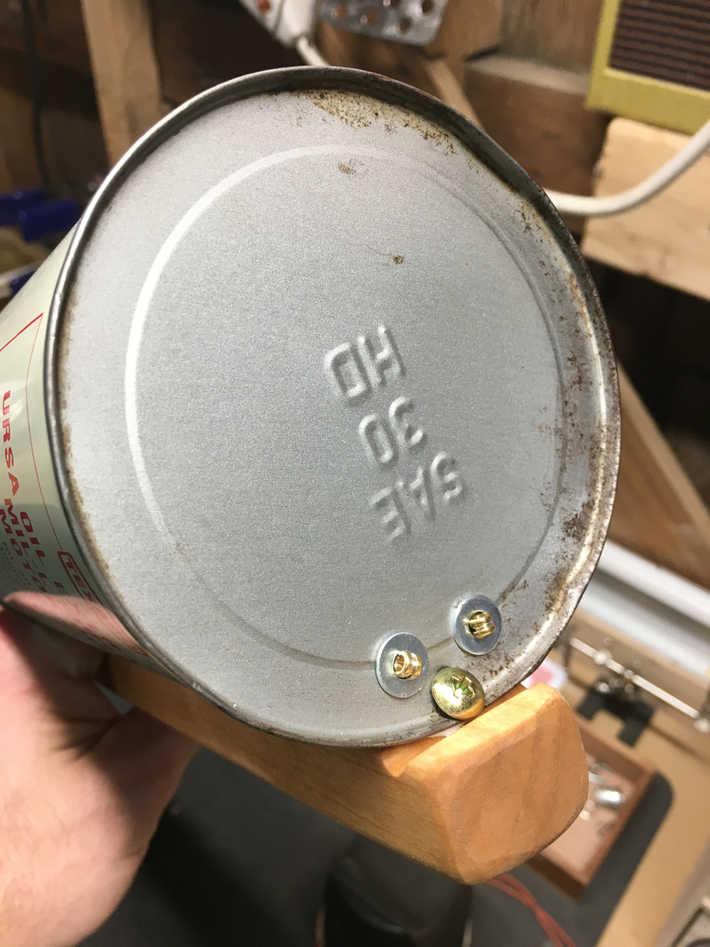 Once the neck was ready, I went to work attaching the can. I used some construction adhesive, then I drilled two angled holes and viola, instant canjo. I also decided to electrify it using a piezo and a jack. I used hot glue to attach the piezo disc and drilled a hole in the side of the can for the jack. After that, I used an scratch awl to make two small holes in the back of the can. The strings will go through these holes. 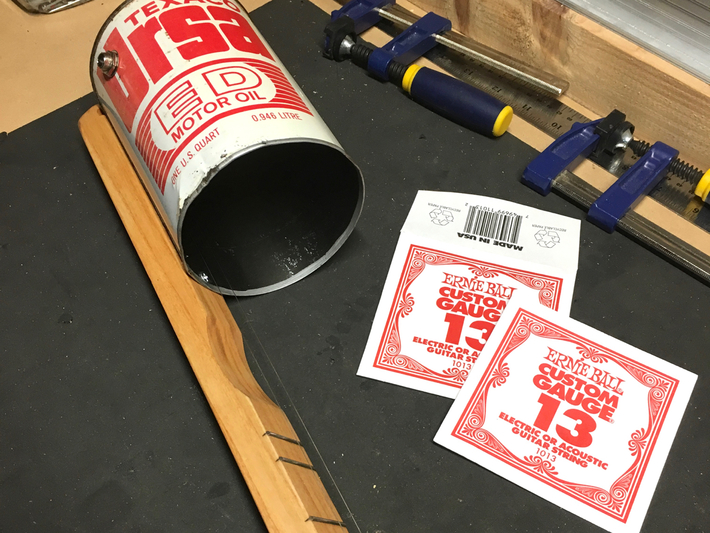 Up until this point, I hadn’t really thought about how I was going to tune this canjo. I decided to use two .013 Ernie Ball strings I had in the garage because: 1) I had them on hand and 2) I thought it would be cool to have a drone string and a melody string. I put a small washer on each string before threading it through the hole in the can to prevent it from denting under tension. When I started to tune her up I realized the strings were naturally trying to pull towards the middle of the neck, so I filed a couple small grooves near the tuner holes. I also used a few small screws to help guide the strings. 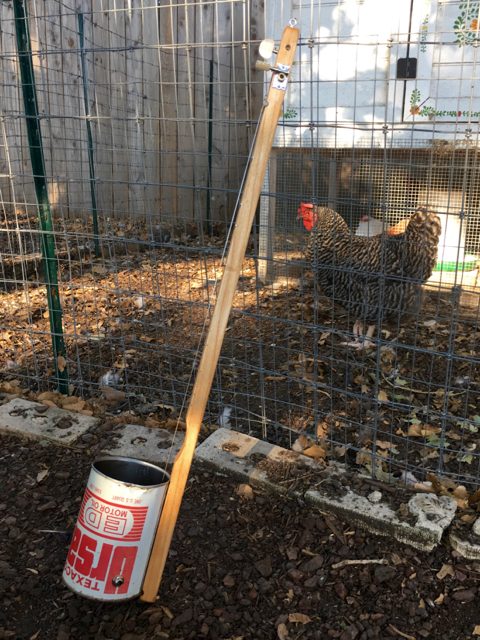 My wife came home just as I was stringing it up. She realized what she’d done and was apologizing like crazy. Clearly she felt awful for locking me in the backyard. “But look what I made,” I kept saying as I held up my accidental canjo. A wiser person than me once said, “when life gives you lemons, make lemonade.” I say, “when wife locks you in the backyard, make a canjo.” I’m not sure mine has the same ring to it.

You can see/hear a demo of this instrument here: https://cigarboxnation.com/video/the-accidental-canjo

Great tale!  Even with a moral!

Started by the anonymous pick in Other stuff - off topic, fun stuff, whatever. Last reply by BUGGY (C) on Thursday. 10 Replies 8 Likes

"the bass was made from a crate the market next to where I live had. They put fish in it. Same idea…"
26 minutes ago