Every year around December my family asks me to provide gift ideas. I always do, but typically they ignore most of them and I end up getting socks or dress shirts or something like that. I don't want to sound ungrateful, I always appreciate it, but this year my older sister surprised me with a Tin Pan Alley kit from CB Gitty. What a cool gift!

Note:  This article has been chosen as featured content for Cigar Box Nation.  We've added the top header image and the accompanying video to the original blog.  A big thank you to Poorness Studios for the fantastic builder's diary. 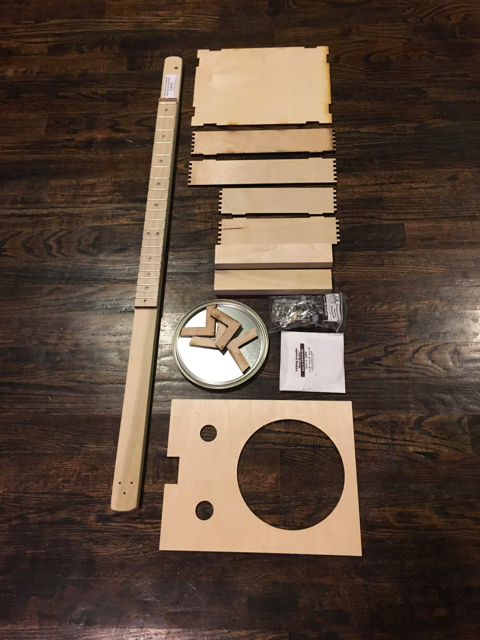 This was my first time building a guitar from a kit. I've modded many guitars in the past and fixed several broken instruments, but I'd never built one from just a stick and a box. I was a bit nervous but I figured I'd just go slow and take it one step at a time. First things first, I started putting the box together and went to work contouring the neck. 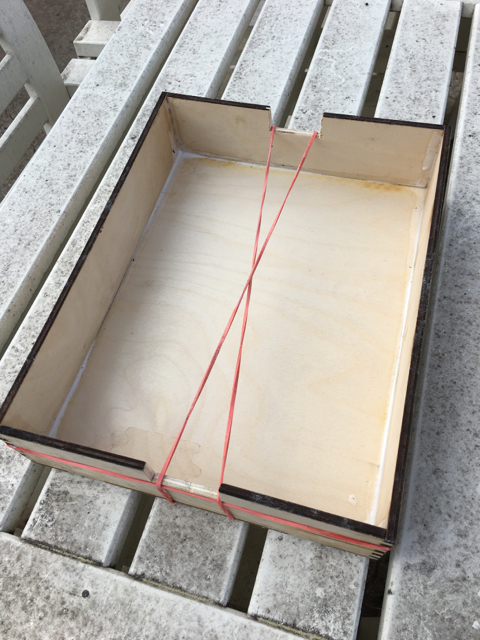 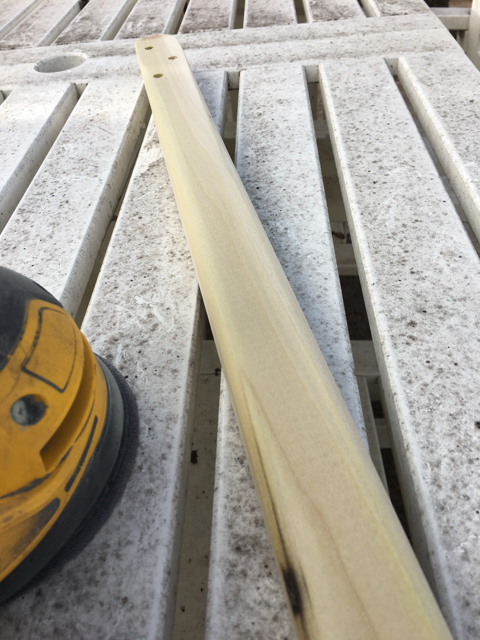 The kit was pretty darn easy to put together. Most of the wooden parts were pre-cut, but you have to cut the neck notch (both in the body and the neck) yourself. Once all the glue was dry and the braces were in place, I started thinking about how I was going to finish this kit. I decided I wanted to try to paint it black with hot rod flames. I also decided to finish the neck with a nice dark stain. 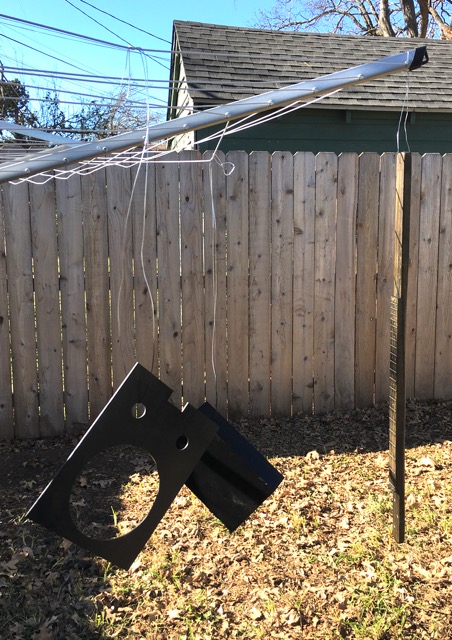 The next step was to notch the neck so the top can vibrate freely and the resonator cone doesn't hit the wood. This was probably the most difficult part of the whole build. Even though this kit is designed to be acoustic, I decided to add a Lace matchbook pickup to the instrument. I added a pot and jack and wired them up before I fitted the neck. This is where the guitar really started to take shape. I mounted the neck and began adding the finishing touches like chrome corners and pearl tuners. At this point I realized I had no idea how I was going to paint the flames on the top so I did some research. It turns out you can do a pretty good flame job with rattle cans. 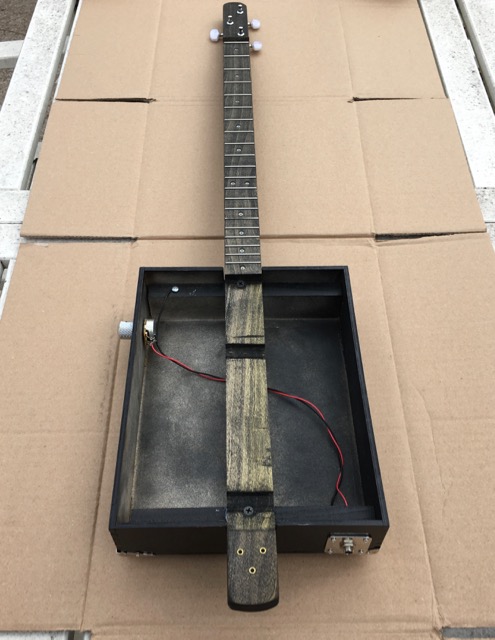 I practiced painting flames on an old shelf and discovered it's not as hard as I thought it would be. It's actually pretty simple once you get the hang of it. I covered the top in masking tape and went to work laying out a pattern. Then it was time to lay down the paint. 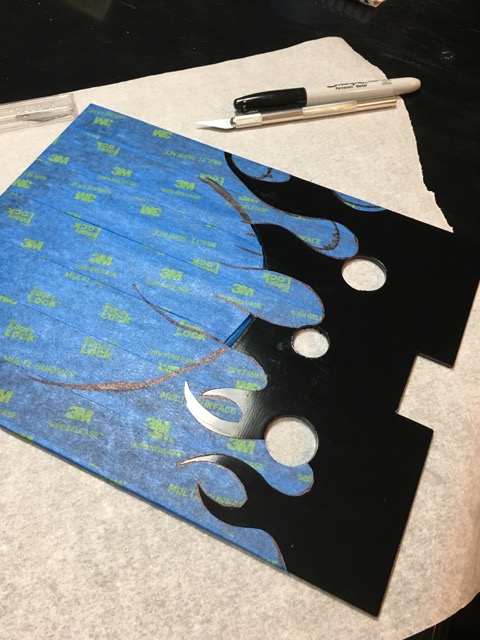 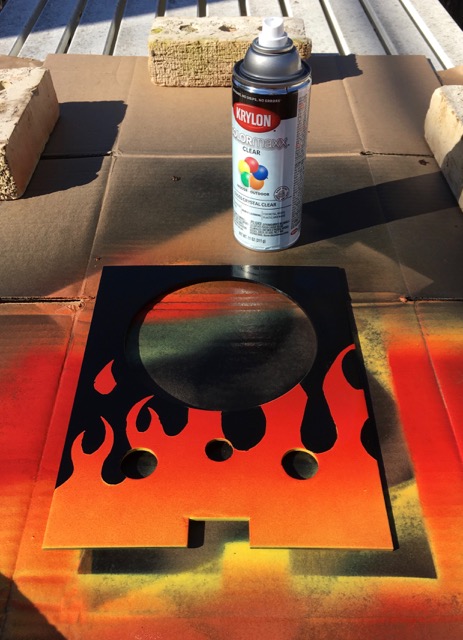 After 3 shades of paint, several coats of clear, and a lot of dry time... I was happy with the way the top came out and decided it was time to glue this baby together. First I had to wire up the pickup though. Once I tested all the electronics, I used a couple pieces of scrap wood and some clamps to hold everything in place while the Titebond dried. 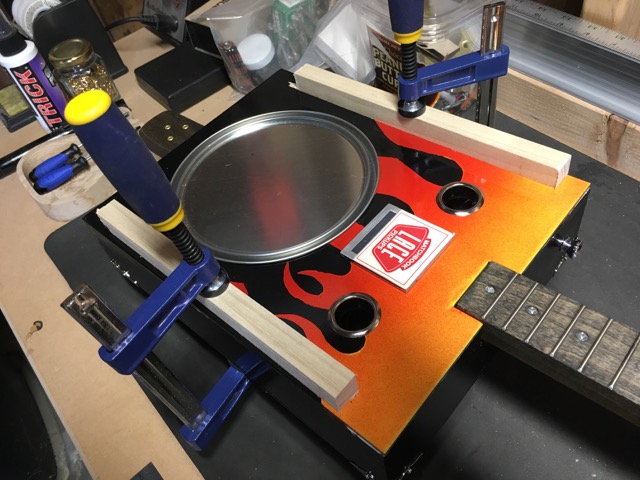 At this point I decided to add an old railroad nail to the headstock as a decoration. It looks super cool. However, this isn't an original idea. I stole it from Ben 'Gitty' Baker. He uses this technique on his Hobo Fiddles. I also noticed the low G string rattled a bit, so I added a screw to the headstock to act as a string tree. The kit comes with acoustic strings, but I wanted to use electric ones. I had some laying around but the gauges were a little heavier than what's supplied with the kit. After some initial trouble with the bridge, I found a spot where all the strings intonate well. It took a bit of trail and error, but I got her to tune up real nice. Yeehaw! Now I've got 2 CBGs in my musical arsenal. 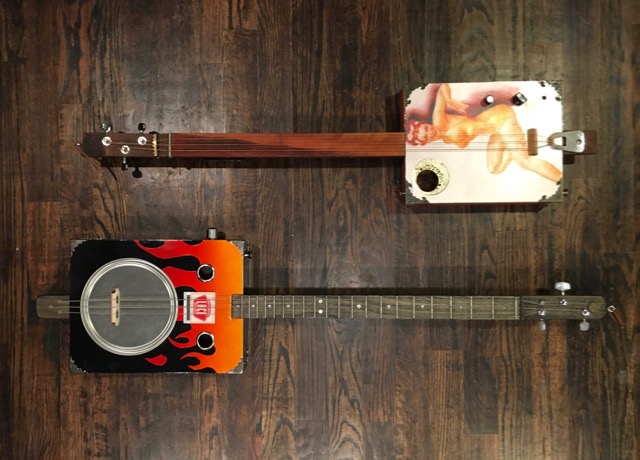 Overall, I'm really impressed with this CB Gitty kit. It was a pretty intuitive build and I had a lot of fun working on it. I would recommend this kit to anyone who wants to wants to become part of the Cigar Box Revolution. Take your time, follow the instructions, and you too could have a pretty lilttle gitty just waiting to be played.

Wow. I’m featured. What an honor. I really appreciate you guys taking the time to read the article. Thanks Shane and Ben!

This post has been Featured by Cigar Box Nation.  I've added a header image and embedded the video in the original content.  Thank you so much, Poorness Studios for your contribution.  We will be sharing this in our next Cigar Box Nation email blast.

Good work, glad you liked the kit. We have more great kits in the works for 2019, stay tuned!

Is there a way to remove tobacco smell from cigar boxes?

Started by the anonymous pick in Other stuff - off topic, fun stuff, whatever. Last reply by BUGGY (C) Sep 29. 10 Replies 8 Likes

Found 2 springform pans at the thrift store. Inventory of the panels I have..Olivewood, Ziricote,…
6 hours ago
0 Comments 2 Likes