Note:  I am working on a collection of short and very short stories that all tie together in a fictional place called Goodland County Oklahoma.   Some are music related and some feature CBGs.   I appreciate your comments, good, bad and corrective.

A tilting front porch had a green porch swing, a big red Coco-cola sign and short barrels for seats. The west side of the 22, the side toward town, was barn red with white lettered 'Mail Pouch Tobacco' advertising. Out in front of the porch was a single gas pump, red with glass top.

Jimmy Mc Neese didn't own the building, but he was the proprietor and he made things work. If you wanted corn liquor and Jimmy thought you were okay, he would sell you some. Corn liquor was his money maker and come Friday and Saturday nights, the Two Two had live music and dancing.

Next door was a two stall repair shop that the big Osage Indian, Benny Poor Bear, rented from Jimmy. Benny could fix most anything. Maybe his work didn't suit some folk's schedules, but leave him alone and give him a little time and he could fix cars, tractors, motorcycles, radios, wringer washing machines and most things that needed fixed.

The Friday and Saturday night crowd was mostly colored, but at least a few whites and Osage always showed up. The fiddler was a white man, John Potter, who ran the pawn shop and bail bond place in town. He and Ted Johnson on banjo did songs you could dance to. Jimmy Mc Neese would sit down with a guitar a few times a night and play some blues. Anybody that wanted to could get up and do a song. If Jimmy liked it, he would call out, “Give us one more!”

Dance nights had free admission. A mule and wagon would be in colored town at seven o:clock to carry folks out to the 22. At eleven, it would carry folks back to town. The 22 might stay open until the wee hours of the morning, but if you stayed later than eleven, you had to catch a ride or walk back to town. Jimmy wanted folks to have a good time, but he didn't want no trouble.

Sheriff William Wright got a call on Monday morning from Elton Mc Coy's wife saying Elton was 'Sick as dog and had Jake Leg from drinking bad liquor at the 22. They wanted Jimmy Mc Neese arrested and they wanted him to pay for doctor bills and damages. The Sheriff said he'd see what he could do.

Del Wright, the sheriff's son, was day deputy that week. Del went to the 22 and told Jimmy about the complaint. Jimmy, cussed a good blue streak, slapped the counter top and said, “That cracker came here more than half looped. I don't think he had but two or three drinks! Nobody else got sick.”

Del visited a while, thanked Jimmy, and said he'd look into it further. Del and Jimmy were friendly in a cautious way. An honest deputy could not afford to get too friendly with a colored man who sold boot leg liquor. But they shared a love for music, especially the blues, and in that subject, Jimmy had been Del's mentor.

Del went over to the repair shop and found Benny Poor Boy patching a tractor inner tube. He told Benny what he was looking into. Benny said, “There not a thing wrong with Jimmy liquor. That McCoy come in here drunk. Some people got whiskey sick down in Osage town. Talk to Francois Poor Bear, my cousin. Tell him I sent you.”

Del drove down to Osage and found Francois. Francois said, “Yeah, that dumb ass Tom Lyons and George Benson got sick as dogs. I heard they bought the booze from that Elton Mc Coy. Words out not to buy from him.”

Del drove down to Mc Coy place midway between Osage and the near ghost town of Hard Scratch. He parked the car, went in the barn and looked, then went to a shed on the edge of a nearby timber with a big messy pile of firewood beside it. He opened the shed door and case solved, there was a still inside. He brought the car over to the shed, loaded the still and then went to the house and arrested Elton Mc Coy for bootlegging.

You don't sell bad whiskey in Goodland County and try to put the blame on somebody else.

Many law enforcement agencies made only token efforts to enforce the liquor laws during Prohibition. Too many people thought the law was wrong and they were going to have their drinks.

Prohibition made outlaws and wealthy men out of some honest and not so honest folks. Many bootleggers took pride in their product. Some did not have the the knowledge, skill or integrity to to make 'safe' alcohol. Some customers got sick and a few died.

Jake leg was a condition, usually temporary, causing victims to lose the use of their hands and feet. Some could walk, but with poor control of their muscles. They often had a jerky and distinctive way of walking called Jake walk.

Thanks, Belinda.   I did not know who Edward Hopper was.  I clicked on the link you gave and loved his art.  The night café scene was familiar, but the rest was new and wonderful.

Thanks, Erasmo.  I don't drink coffee, but would like joining you on some shine, wine or just the two of us and some instruments.

enjoyed that John...made me think of Edward Hopper paintings http://www.edwardhopper.net/edward-hopper-paintings.jsp#prettyPhoto[paintings]/4/

Still some ole timey gas and grocery spots, Wes?  Pretty neat.   Thanks for reading and commenting.

That is pretty close, Lane.  I picture the 22 being more rundown and ramshackle.

Thanks Pick and Grandpa.  Really on the Jimmy leg?

Fine story, Uncle John. I could see it as I read it. I believe that in some quarters, that same malady was known as "the Jimmy leg". 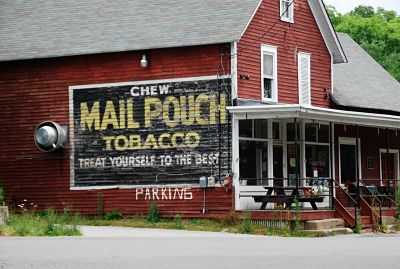 Well, somebody repainted the Mail Pouch part in yellow and they had the swing down and put in picnic tables since it was going to be a big crowd Saturday. ;)

Started by Dan in Performances, How to Play, Lessons, Concerts. Last reply by BrianQ. on Tuesday. 5 Replies 0 Likes

CBGers are a handy bunch.

Engblom replied to Engblom's discussion Anyone with experience in 1-3-1 tuning?
"This sounds interesting, especially as it got the middle G string, which would fit my voice well if…"
10 hours ago