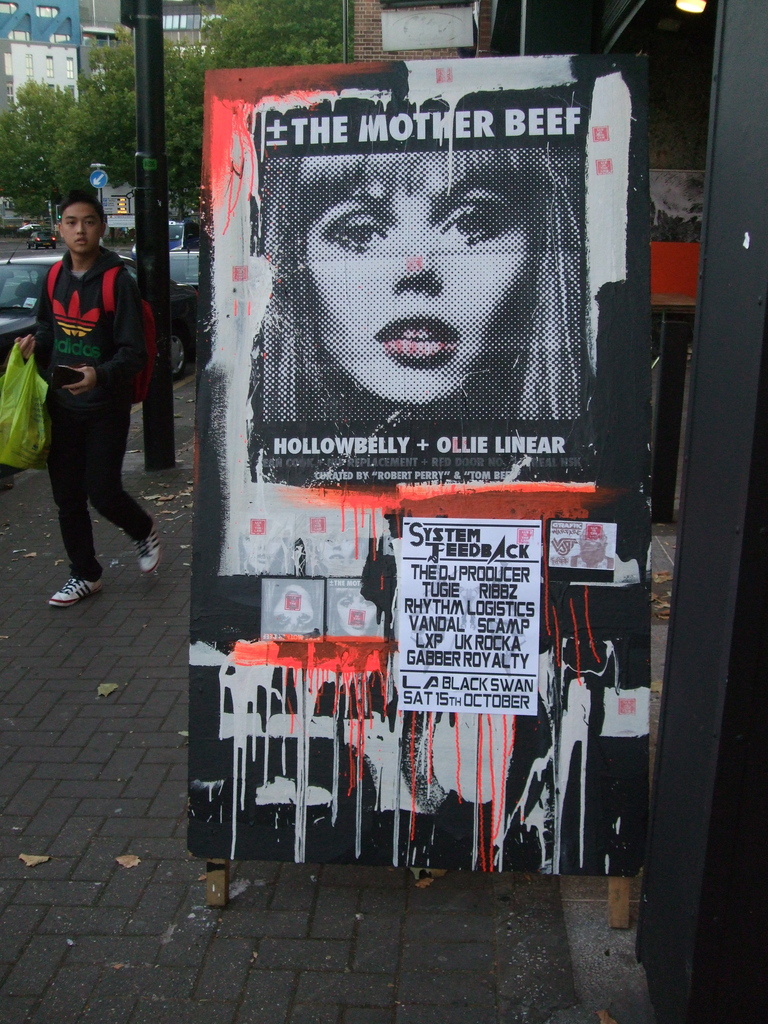 I satnav towards Bristol with high hopes-the band I'm playing with are top drawer in my book,plus I've held a private fascination for the Bristol underground art/music scene ever since enjoying Banksy/Massive Attacks' work.I've also checked out Stickees work and he and his art will be present tonight

Indeed,after I arrive and kerb the Bellybus,a cursory walk around the immediate neighbourhood reveals what I take to be a Banksy stencilled up on the side of a pub opposite the venue-however I'm reliably informed its by SPQR- sweet stuff-  for more check this link                   http://spqr.uk.net/ 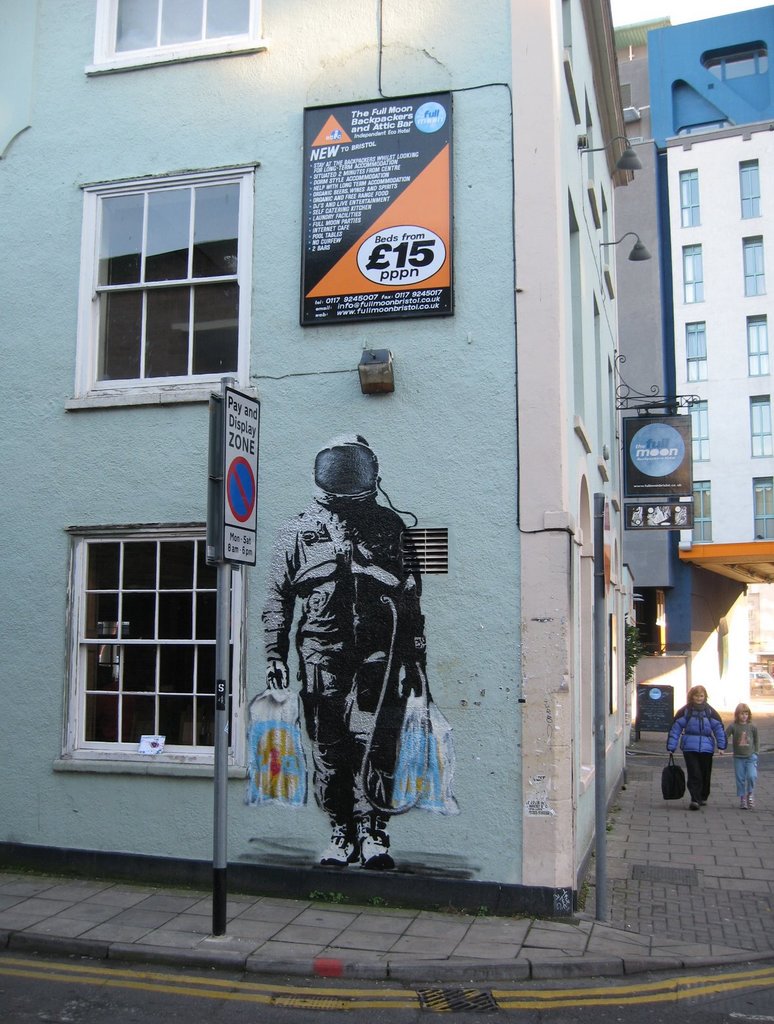 Likewise the venue is suitably cool-a former motorcycle showroom from the fifties, the two stories contain the gig/art/ bar space on the ground floor, and art workspaces on the first.Very Warholian/industrial loft chic.In short-my kinda pad.The people putting on the event have a real feelgood vibe amongst them-they all pull together,spending the late afternoon pasting up giant sized artworks, whilst others set up a soundsystem so frickin poweful its subsonic bassbins threaten to bring the building down.I grin in appreciation as KRS-1's track "woop woop-thats the sound of da police!" fills the darkened space.Damn-last time I heard that tune I'da been dancing on the streets of Notting Hill Carnival with a bottle of Thunderbird in my hand.Happy days.

I soundcheck and the hollow stage throws up troublesome unwanted low frequencies, but eventually it gets sorted.Crash barriers are brought in to protect the stage which seems OTT to me-but this event has been promoted to the nth degree-little do I know that later there'll be almost as many punters locked out on the street as actually manage to get in. The impossibly handsome and charismatic singer from Mother Beef tells me many people will be coming to see me,which I find hard to believe, yet whilst eating a pre gig veggie bap in the street opposite the venue in the early evening I'm surrounded by a gang of people who say "Hey Hollowbelly we've come to see you" and start to introduce themselves "this is my wife Jane" I stand there thinking 'I haven't a clue who you are'.Still its nice to meet them-I guess thats the power of youtube or whatever.

Well I go on at 11pm and the crowd are well up for some Bellyfication-I enjoy that gratifying feedback from a live,responsive,supportive,up for a party crowd.Goes down great and I shake a few hands over those barriers before disappearing behind the speaker stacks to the left of the stage, and slumping sweatily onto a beat up couch.After a while I take up position in the middle of the crowd cos I want a punters eye view of Mother Beefs set.I thought they'd be good, but like all aspects of this event, they surpass even my lofty expectations.The singers so laid back he doesnt even bother to stand up-he sits on a chair cos well, thats how Tom rolls-indeed he's so bloody laid back I reckon one day the Beef entourage will just wheel his bed on stage with him lying in it-wake him up by rolling him a fat one and put a guitar in his hands..hahaha! but I digress, its all fantastic-and their album isn't even out yet.Standing there it is easy to imagine them on Glastonburys main stage-one day when they're that big I'll impress my teen daughters by saying "see the lead singer-he made me a cup of tea once" and they'll say "yeah dad,right."

I'm supposed to crash at Tom Beefers' gaff but its 3:30am and I have a bus loaded with gear and nowhere reasonably safe to park up.As Im only 80 miles from home,I opt for the sensible option, offer my apologies to his flatmate and set the satnav for Hollowhouse.As I drive the sweet smell of someones ganja floats up from me hoodie. A wicked event-catch the Mother Beef whilst you still can.

Started by Dan in Performances, How to Play, Lessons, Concerts. Last reply by BrianQ. 18 hours ago. 5 Replies 0 Likes

"Sounds great to me Lappy!!"
2 hours ago

BrianQ. replied to Engblom's discussion Anyone with experience in 1-3-1 tuning?
"Actually it’s 1-5-8 because the high string is an octave higher, but CGC is still a 1-5-8…"
2 hours ago

Engblom replied to Engblom's discussion Anyone with experience in 1-3-1 tuning?
2 hours ago

Most seem to tune their CBG to 1-5-1 (for example GDG, EBE, DAD). As I have understood this tuning…See More
2 hours ago
2 Comments 0 Likes

"Thanks for honoring one who has made a difference in your life A.D.! May Wes Rest In Peace."
7 hours ago

"Groovin’ as usual A.D.! Pretty revved up on this one."
8 hours ago

"Rich!!! Thanks for treating us Korrigan."
8 hours ago

"Thank you Kale! Some of the Christmas songs are a challenge to play and sing, fortunately for us…"
8 hours ago