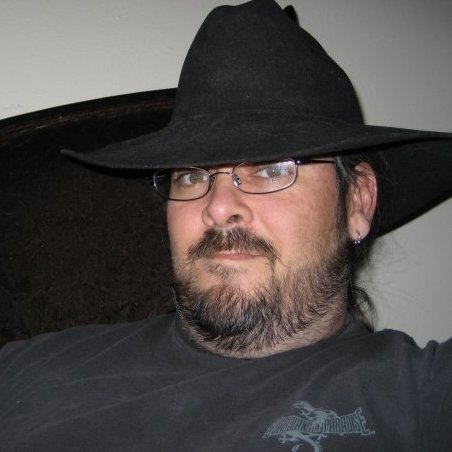 Rod Lindsey replied to Cause the Blue rat's discussion Getting more out of your fretted three string CBG.
"Rat, I gotta say thank you. I was looking this morning for a different way to STRING my cbg, because I have been having issues with chord fingerings on it. I have been playing it with nothing but a slide up til recently, and was getting rather bored…"
Aug 4, 2019

How did you learn about Cigar Box Nation?
youtube

How many instruments have you built so far?
6

What do you find most interesting about cigar box guitars? (If you do not enter something meaningful here, your membership may be rejected).
I like the "no rules" attitude and the poor man roots of the instruments. I love the little guy with music in his soul, playing on a handmade instrument mentality...

How I got into this amazing craft

I know we all have our stories to tell. some of us actually tell them and some of us don't, because they are a bit on the personal side. I'm breaking down that wall, for a reason. That being said, my story is a VERY personal one, but I tell it a lot. It starts out with a personal tragedy, but follow it til the end, and there is a pick me up.

I got into this amazing craft looking for an outlet to my pain. July of 2012 my youngest daughter was murdered at 14 weeks into her pregnancy with my first granddaughter, victim to domestic violence. The father of her unborn child shot Ashleigh twice, once in the chest, and once in the head, and then shot and killed himself. Five months later, my wife of 10 years, two days before Christmas, tells me that she's leaving. I bounced around for a little while, starting at my parents, then moved in with friends, trying to get back on my feet, emotionally and financially. It wasn't working very well.  friend of mine had also recently gone through a divorce, and had bought a little place in East Tx, and invited me to move in, giving me a place to heal, and get back on my feet. I took it. It was slow going, getting back on my feet, cuz I was drowning inside. I kept trying to move forward, though.

Before my loss, I had been working on a small, hand made jewelry business, selling my jewelry and bone carvings online, and at a couple of small local Renfaires and Medieval Reinactment events, and spent my evenings singing acapella around the campfire. all that stopped shortly after the tragedy for the most part, and within a year of moving to East TX stopped completely. My roommate had a friend getting married at a small event in SW Arkansas and asked me if I wanted to go with, just to get me out of the house and camping again, and I said "sure, why not?" I went, and had a good time that weekend, and ended up singing around the campfire that weekend. It turns out, a couple of the other camps near us heard me singing. They sent me message through my roomie's friend wanting to know if i would come back and sing the following year, so I did. I got to where I wanted musical accompaniment to my singing and bought a guitar, and started taking lessons from a coworker. It didn't work out so well, and I quit, but still wanted accompaniment, so I got on youtube looking for lessons. A couple of days later, I saw a video of Christoper Ameruoso playing this 3 stringed instrument, and then another one, and the Justin Johnson playing his cbg, and then a didley bow, and before I knew it, I had killed several hours watching these awesome videos of these guys playing on CBG's. I had been spending all of my free time binge watching Netflix since I moved out here, and wanted more to my life.  The next month was spent binge watching Cigar Box Guitar videos on youTube, and I told myself, "I can do that..." my first build was a little 2 string tuned Gd, then I built me a Didley Bow made from an ax handle with a soap bar style pickup, from c.b. gitty, then I built me a 3 stringer with a soap bar pickup, and made a couple of friends at a local guitar shop. I haven't gotten to spend a lot of time learning to play, due to really long hours at work, but i am learning, and have even written a handful of songs, that I am working on learning how to play while singing.

OK, I promised a pick me up at the end, so here goes. After EVERYTHING I have been through, including losing my faith through it all, I can still ttell you that everyday on top of the dirt is a blessing. Every new day is precious, and you have the ability to make your, and someone else's life better, by having been a part of it. You just have to try. You can make it through ANYTHING if you just keep putting one foot in front of the other. If you can't walk, you crawl, and if you can't do that? Well you find someone willing to carry you til you can crawl. Don't quit. Don't lay down. Keep moving forward. You can do it. I ain't nobody special, I'm just Rod, and if I can do it, you can too. If you have faith, don't let go of it, struggle to keep it, cuz once that glass is dry, it's hard to so much as get it wet again, much less refill it.

My friends, I bid you Peace and the very Brightest of Blessings. Don't ever give up. I will eventually get better. All you gotta do is not give up.

"You guys are my fave right do-et.  That twanger sounds great."
1 hour ago

"By the way, listen with headphones if you can. There's a lot more going on there then…"
3 hours ago

"Thanks guys!And yeah Poorness, I'm hipper than I look. lol"
3 hours ago

"I can always tell you are having a good time putting them together! "
5 hours ago

"Another delightful musical skit Kale! Creative and entertaining. You have a fertile imagination."
5 hours ago

"Thanks for watching AGP and Uncle John! I think this song goes back to college days when I was…"
7 hours ago

I thought it was time to do another musical skit. I hope you all enjoy this two man rendition of a classic folk tune, New River Train. If you haven't seen th...
7 hours ago
5 Comments 2 Likes