How to play the 3 string cigar box guitar

For Sale - The Gut Bucket California.  The owner/operator, Josh Gayou, has been making custom guitars for musicians and enthusiasts since 2008, when he was first bit by “the bug”.

While his first instruments were a humble learning experience, he has since quickly established himself as one of the foremost luthiers in the Cigar Box Guitar world.  Examples of his work are owned by such notable performers as Dennis Casey (Flogging Molly), Lukas Nelson (The Promise of the Real), and Shane Speal (the King of the Cigar Box Guitar).  Shane was so pleased with his guitar that he got a tattoo of it on his 40th birthday. Although he is an engineer by day, Josh has come to think of himself much more as a guitar maker.  Because he doesn't depend on sales to pay the bills, he enjoys a unique situation in which he can focus all of his attention to doing what he loves most: making instruments.  Not a lot of time is spent dealing with sales and marketing.  The way he figures things is that even if no one is paying him he's still making them.  Luckily, people keep showing up to give him money to make something new!

When not in the garage cutting on a hunk of wood, Josh spends as much of his time as he can with his wife and son.  He is a home body by nature and quite content to remain is his "cave".  The one exception to this rule is when he gets to go out to enjoy live music with his wife, many times at concerts where his work is featured. 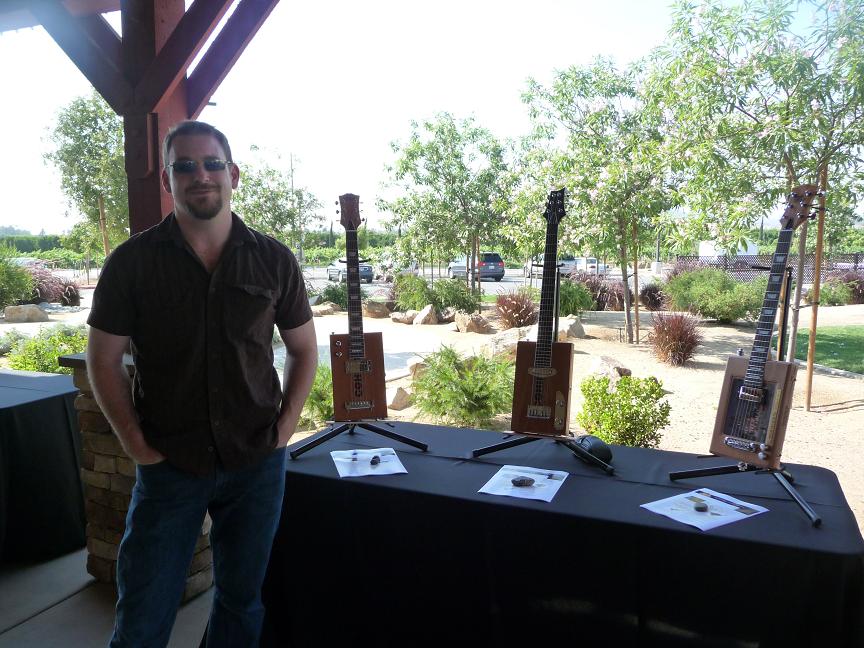 When it comes to guitar making, Josh keeps no secrets.  He is well known in the cigar box guitar community for his willingness to answer any and all questions and does his level best to provide help and assistance when asked for.  In addition, he is very active in various charities, regularly donating custom guitars to be auctioned off to benefit all sorts of worthy causes.  He is quite partial to any organizations directly benefiting children and/or parents. 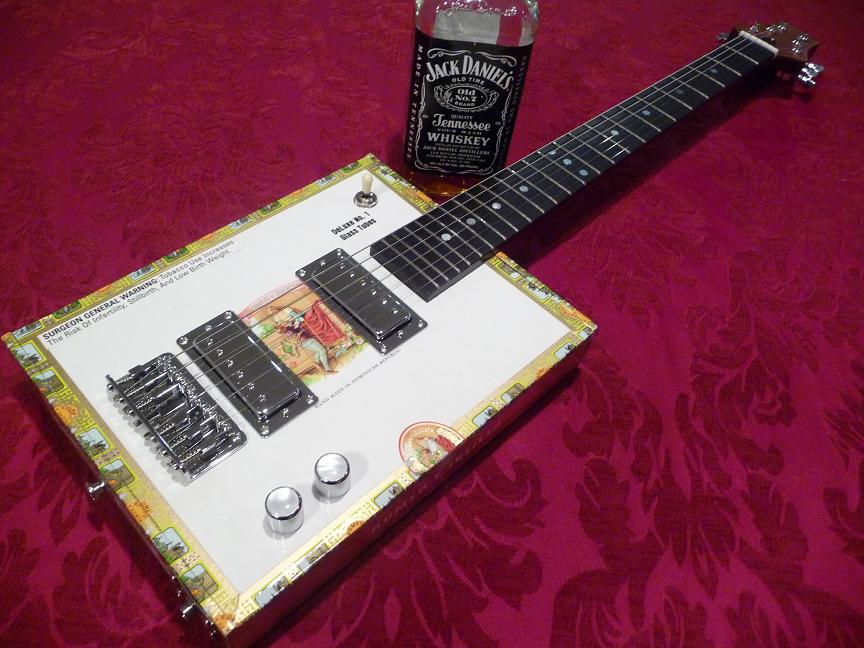 Josh has written a book on the subject of high-end custom guitar making for the Cigar Box Guitar world, which can be found in the Free Plans section at www.cigarboxnation.com.

How did you learn about Cigar Box Nation?
I was around when everyone was still on the old Yahoo group. It helps when the creator of the website is your buddy.

As a first-time builder, I can't tell you how humbling it is seeing your guitars. The tone and sustain is incredible. I'm almost done with my first build, which was probably a bit ambitious for my first one. The guitar itself wasn't terribly difficult, but the electronics are taking a bit of time. Piezo bridge with a single-coil neck pickup. It has a blend circuit that amplifies the piezo and allows a mix of piezo and magnetic. Still tweaking the circuit, but it works.

I wish I had read your Advanced Cigar Box Guitar Construction document before I had started, but hindsight and all.

I particularly like the guitar that you have on your website that you made for Mojo Perry. The combination of the box and the Harrison pickups just goes, if you know what I'm saying.

Hopefully, building won't turn into a burden. It would be a shame for someone with your talents to give it up.

Michael spackman said…
Hi josh
I ordered a guitar from you sometime months back but haven't heard anything recently. Is it still happening? Can you let me what's going on?
Michael Spackman

Deb Dugan said…
Hi Josh,
Hope all is well with you. We have not touched base in a while - was wondering whether you were still interested in working with us. Hope to hear from you soon!
Best, Deb from Raising The Blues.

Hello!  I LOVE YOUR GUITARS!!!! My name is Kevin M. Kraft, founder of the annual Kansas City Cigar Box Guitar Festival. This year's event will take place on August 26th, and once again I am accepting cigar box guitars and cigar box guitar-related donation, which will be raffled off during the festival, the proceeds to benefit Kansas City's Blues in the Schools program. If you have a guitar, accessory, CD, DVD--anything related to cigar box guitars that you would like to donate, please contact me at the Cigar Box Nation or email me at kevinmkraft@juno.com  to learn where to send it.

Thanks for you time and consideration.

I read your blog, and I totally understand where you are coming from. I am glad you are getting things under control. Not to compare my situation yours, but I constantly find myself saying, "I want to build because I want to build, not because I have to build".

Josh...I did and thanks so much for the info!!  I can't wait to give it a try on my next CBG!!!!!  Again, thanks for sharing your knowledge.

David Tutterrow GutBucketGuitars said…
Thanks for the advice on rounding the neck. Also, thanks for the advanced build file you put on the site. I downloaded it a couple of months back and am shelving it until I feel I can accomplish at least some of techniques. I'm sure I'm not the only one who appreciates it.

Josh, thanks for coming out last night. I would love to check out your shop sometime in the near future. Hopefully you can make up to Hacienda Heights on April 30th.

You can download The Budrows eight song demo CD here, for FREEEEE.

hopefully talk to you soon about a show in Temecula or otherwise,

Cris Portillo Jr. said…
Hey Josh I uploaded the four songs from Saturday. I recorded them on my computer so it didn't do the guitars justice because of the angle that the mic was in relation to the amps but I had such a good time jammin' I thought I'd put them up.

Smokehouse Guitars has partnered up with Boutique Guitar Resource to bring my guitars more into the public awareness (and hopefully get the public to buy them).

Boutique Guitar Resource is an online blog and guitar vendor for unique and rare custom guitars. I'm rather excited to be included in the roll call.

Read about my in an interview at the site or just order a guitar!

1. It looks like I'm going to be in my local paper (maybe). I've been contacted by a reporter who wants to meet this week for an interview for my guitars. Yay me!

2. I just finished a guitar for this guy named Dennis Casey. He's in this group called Flogging Molly. I didn't even realize who the guy was until half way through the build. Stupid me. Pretty cool, though.

Started by Anthony adams in Performances, How to Play, Lessons, Concerts. Last reply by BrianQ. 22 hours ago. 4 Replies 2 Likes

"It is now Brian. Homemade straps are the best!"
4 hours ago

"Nice pair of CB ukes Robert! The wood finish on the boxes looks great."
4 hours ago

"I like it Ron! Cool triangular body."
4 hours ago

"I can feel the passion in your singing and playing James. Well done."
4 hours ago

"In the groove as usual A.D.! You are one creative and productive musician/videographer."
4 hours ago

"You are the Kazoo King, Kale, with quite the Kollection! Does a Kazoo play a day keep the doctor…"
4 hours ago

Brian updated their profile
5 hours ago