Permalink Reply by Mama Mojo on October 6, 2010 at 6:08am
Hi Linda and welcome to the group! We are happy to have you here!
In response to you question, if you search "piezo wiring" or "piezo diagram" you'll come up with a bunch of very useful stuff. Skeesix is a member here and is extremely knowledgeable about pick-ups (she even winds her own single coil 3-poles) so perhaps she'll be able to drop in and point you to something specific.... I generally put mine somewhere under the bridge on the inside of the box and attach it with hot glue, or I make some that are embedded right into the bridge (Darren from Backporch Mojo even has video's about how to do it). You'll also need a 1/4 jack wired to it and then a guitar/instrument cable to run to an amp. I hope that this is enough info to get you started! Again, welcome!

Permalink Reply by Dianne Woods on October 24, 2010 at 5:58am
Hey Linda, welcome to the group. Glad you fell in love with the cbgs. Please share your 1st build with us. I would love to see it. I am not from Kansas, but here I am. I am a mile or two from you----South Ga. LOL
Building gets in your blood and soul, and you can't help yourself from building another and then another.
Happy building. 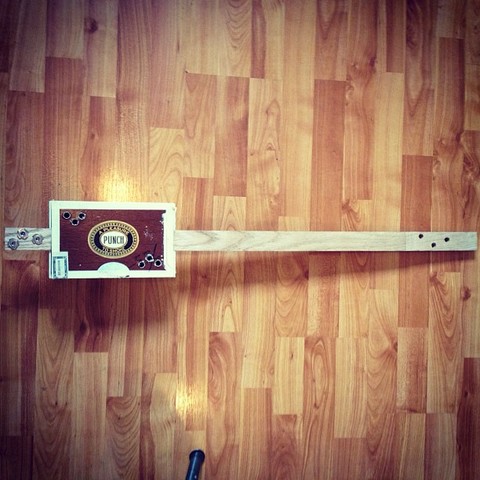 "Thanks AGP could use a  footstomping track"
3 hours ago

"A very distinctive pair! A standout hubcap guitar build Taffy. I really like what you have done…"
3 hours ago

"Thanks much Brian! We try to keep our song choices interesting."
3 hours ago

"Kool, I worked with the Dead & Jerry’s solo band as a Stagehand & assistant Guitar…"
4 hours ago

BrianQ. commented on Glenn Powell's status
"Make sure you double check that it’s the round stuff & not the triangular or octagonal…"
5 hours ago