I'll go first since I am asking

For me it's the mad scientist in me. I love to tinker with things , and make things look out of this world so Steam Punk Art is in my blood even before I knew what it was called.  The freedom of it really lends it's self to the CBG as there are no rules and thats how I like it.

The Steam Punk world says it must be victorian looking but they also say that it is a reflection of if steam was used instead of gas up to this point in history kind of a perodox as I see this as the mind works differntly for every genaration and reflects the time.

this simple question has hung out, unanswered since day before Pearl Harbor anniversary two years ago

I've been a builder for many years. Big and small. Mansions to chicken coops, freeways to equestrian arenas, plumbing, electrical...  I fab from scratch.

Steampunk is fascinating to me because the components bring concepts to mind, both individually, and collectively as a piece of artwork.

An accomplished mechanical engineer I once knew was impressed with steam powered machinery and did a certain amount of study and development of devices, convincing me of it's worth in this present day.

I also enjoy the artwork of the Victorian age, which in my own interpretation might include both massive Gothic impact and fine detail in certain aspects.

Shawns pic of his Steampunk CBG is impressive!

Permalink Reply by Shawn on August 27, 2012 at 1:45pm
Thanks for the reply. The tone is great. As that was the first of many I have learned a lot since then. Cigar boxes have challenges that standered hard bodys do not.

Permalink Reply by Shawn on August 17, 2015 at 1:42pm
Thanks for sharing and to your question about tone it rocks hard sweet telecaster sound comes steaming out of her.

I think that my attraction is the mechanical look and concepts, having tinkered with engines and such for most of my 66 years on this ball of dirt we call home. Haven't built a Steam Punk CBG yet, but I have an evolving design in my head. Part of my idea is that it should look and function properly without any artificial antiqueness to it. Like an old car, any "patina" should be real, not manufactured.

Permalink Reply by Shawn on August 28, 2012 at 1:28pm
Great reply. For me it must function first as a true guitar then the candy must not interfere with the playing of it in any way. My add on's are for comfort and functions not for fun. Sometimes it is hard to find that one old thing that needs to be there and I see no problem making something new look old. Sometimes that is the hardest part.

This is awesome! I've been into Steampunk for a couple of years. Long before I ever decided to build a guitar... So, I'm really excited to find a Steampunk group here. I don't know enough about building guitars yet to try and Steampunk a CBG, but I've had some ideas...

For me it's all about the build. I've always been a maker of sorts. I get inspired and just make things. Most of the time I get inspired to make things I know absolutely nothing about and have to pick up new skills along the way. Like Cigar box gutars... So, I actually know a little bit about a lot of things, and not really enough about any one thing to make a career out of anything, lol. Over the years I've dabbled in wood, leather, bone, horn, clay, paper, and darn near every kind of craft.

For Steampunk though, I've built lamps, costuming bits, canes, props, and even spent about 6 months developing my own faux absinth recipe called "Nonsinthe". My avatar here is the award winning Steampunk mask I made for Mardi Gras last year, and I've used this same nick over at The Steampunk Empire for a couple of years.

I'm really looking forward to bouncing ideas off of people who understand both Steampunk and CBGs!

Permalink Reply by Shawn on September 29, 2012 at 1:27am
Thanks for the reply it is nice to hear from like minded folks out there. I thought I was the only one for sometime that had the Passion for the SteamPunk. Full steam ahead.

Permalink Reply by Truth Instruments on August 14, 2015 at 11:10pm
For me its how so much of steam punk art is already made from found parts. That commonality is shared with our beloved CBG's. The two just go together like peanut butter and jelly! On a deeper level I love the romanticism of it. I a huge fan of Victorian architecture and styling and the unity that steam punk brings between the Victorian age and the Modern technology is just flat out fun. And you nailed my final reason Shawn I love how there are no rules or guidelines just total creative freedom. It embodies one of my favorite quotes who's author I always forget. But it goes like this.

"Imagine the creations we would see, if only preconceived notions
hadn't killed them first."

There are a lot of great creative minds out there that have been told their idea is outlandish. When the truth is it will just take a few (sometimes a lot) more tries to get it just right.

Wow, it's been a while since this post started. I built my first steam punk CBG 2 years ago, still love it and have another in the works. It's been played on stage by a friend in his blues band and sounds great. 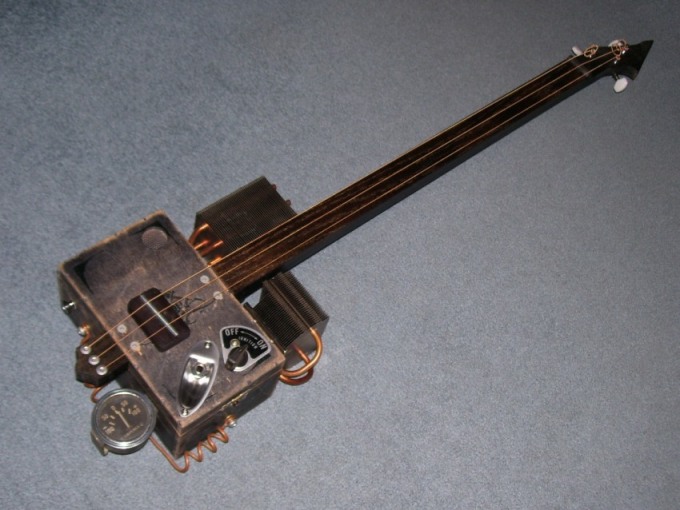 Permalink Reply by Shawn on August 17, 2015 at 1:39pm
I had to rebuild Pathfinder and bring it up to speed
Attachments:

Permalink Reply by Shawn on August 28, 2015 at 1:56am
I love when I find that one piece that unlocks the creative
Attachments:

"Some fancy cutting and construction here."
1 hour ago

"Great idea using round stock for the corner bracing!"
1 hour ago