Had a great time and learned a lot.  I've already posted some photos, a video, and general comments and wanted to decompress a bit from the entire weekend.

Friday night was the concert with Arlo Guthrie (http://www.cigarboxnation.com/group/introduceyourself/forum/topics...) so we didn't get home till very late and had to get up at 5AM to pack my daughter's truck to set up for the show Saturday morning.  The Orange Blossom Festival is primarily a rodeo event with a big parade and large arts & crafts vendor area. I don't have an actual count, but including the food merchants, I believe there were about 60-75 booths.

A couple of reasons we picked this show as our initial outing was that is local (literally a mile up the road from us), we had gone there as spectators in years past so we knew it was well attended, and it was cheap (10 x 10 booth space was only $75, compared to others we considered that were $200-$350).

As it was our first attempt at something like this, we were trying to keep our costs to a minimum where we could, so we borrowed a canopy from a neighbor.  That was our first mistake.  While it had a 10 x 10 footprint, unlike a commercial tent it tilts in at the top like a pyramid so our banners (thank you Micheal, they looked great!) had to wrap around the sides a bit.  It also proved to be too lightweight.  Even though it was staked down, right at the end of the first day as we were packing up for the night we had a small mishap.  The wind came up and blew it over, bending one of the struts.  Lesson learned: don't skimp on the shelter!  Some of the veteran vendors had made anchor weights out of 4" PVC filled with concete which worked really well. Add that to my "to-do" list for next time.  We were fortunate that overall the weather held up, mostly overcast and not too terribly hot (remember this is South Florida in February - sometimes the wind-chill factor is 80!)

There was no electricity on site, which we had prepared for.  I had a low-watt amp built out of a large cigar shipping crate that I installed a motorcycle battery in so I wouldn't have to worry about running down AA's or 9Vs.  I also brought a little foot pedal to boost the volume a bit, and it worked really well - loud enough to get people's attention without annoying neighboring vendors.

We really lucked out with the location of the booth, too.  We were right at the corner where the parade would be turning, on the "good" side of the road with no slope to fight. Right from the beginning, people were crowding the booth.  We had tremendous traffic all weekend.

Most of the other vendors were typical of what you see at arts & craft fairs.  A mixture of hand-made jewelry, plants, leather goods, scented oils and salts, etc., (one guy we became friendly with made birdhouses and wind chimes from old license plates, so I scored a bunch of cool plates for some future builds) but not one other vendor with any sort of musical instrument. We were told by lots of spectators, other vendors and the event staff that they had never seen anything like our stuff before.  That was a blessing and a bit of a curse, I guess.  While most of other items for sale were impulse-buy items at $6-$25 average, my prices for guitars were $125 - $225, something people would have to think about.  I had a bunch of kalimbas priced around $25 as "loss leaders", but overall this was not primarily a music based event.  Even so we were very pleased with the results overall, selling two guitars, an amp, and four kalimbas. I made lots of contacts, including the owner of a cigar bar in Miami that wants to put up some instruments on consignment.  We really learned a lot and are looking forward to our next show. Nice report, thanks. Outdoor events can be fun. The banner looks great by the way, and so do your guitars.

Thanks, Michael.  Yeah, the banners were great.  My canopy tipped in at the top so they had to wrap around a bit, but that shouldn't be a problem with the proper tent.

BTW, as a direct result of contacts made at the show, I have placed 4 guitars on consignment with that Miami cigar bar, and looking to place another two this week at another!

I was studying your pictuce at the festival...Is your display guitars rack make out of PVC's?...Can you tell me how you build it? Any more pics of it?

Yup, 1" OD PVC with three "T" sections, two 90* elbows, and three rubber feet.  I made it about 48" wide and it holds 5 CBG's flat.  While the leg sections are glued together (one elbow, a 12" length, a T, and a 6" length), the other pieces are unglued so I can collapse it for easy storage.  I drilled holes in the top and bottom rails and glued in wooden dowels to hold the guitars.  I did paint it, but not really necessary.  I have added some scrap metal inside the lower legs since then to give them some weight.

This wasn't my idea, just my version.  Here's a close up pic of my inspiration from another member (sorry, I forgot who): 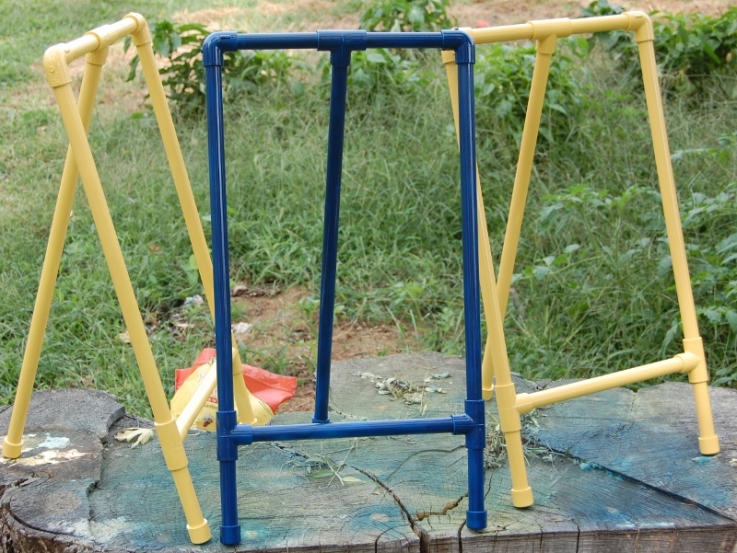 Neat, sorry I didn't get down to see you from Satellite Beach.  Good luck.

Thanks for a very useful "after action".

Slowpaw Cigar Box Guitars up and running again in 2014 (-:

music store sales of your instruments

Do You Take Credit Cards?

want to buy a cbg in uk

"I dig your sound and playing. Rough tough sound!"
1 hour ago

Got My Mind Set on You (cover on acoustic guitar)

"That song was the soundtrack of my youth. You got the chords good."
1 hour ago

"Suede is brilliant idea!"
5 hours ago

Made a tail piece

"A very impressive tailpiece and bridge Howard! "
7 hours ago

"Bed liner spray from the automotive store works good too, looks like the back of an Ovation…"
8 hours ago

"Thanks Digly, I was surprised when they put some money in. I do have a board with a QR code on it…"
13 hours ago

"thanks Robert, ah yes I was trying out things in Power Director 20, having recently upgraded from a…"
13 hours ago

These 2 stopped by my campsite beside "The Swamp" at Clifftop for a while. Turns out they are David and Nancy from Roots 2 Music.https://root2music.com/home...
15 hours ago
1 Comment 1 Like

BrianQ. left a comment for Spencer Wadsworth
"Welcome, check out the Resources tab for build/play info and join some groups located in the Posts…"
17 hours ago

"Thank you, where do you thing would be a good spot for the piezo, never installed one.! Thank you"
19 hours ago