What a great project!  I've got several candidates for my next build, but one of the frontrunners is a tzouras, which is sort of the Greek equivalent of a cura saz (but with a longer scale length).  I recently completed a Greek Baglamas, with a 15" scale length, tuned Dd-aa-dd - an octave higher than my bouzouki. The cura saz is right in between these, with usually an 18" scale length. (As you're planning.)

As far as frets are concerned, I had understood that the cura, like the other instruments in the saz family, used movable, tied-on frets.  (I've played with saz players, and theirs had movable frets.)  So maybe you don't need to decide about the number or tuning just yet?

What sort of a box did you have in mind?  For the Greek versions of the baglamas and the tzouras, the small, relatively thick bowl contributes to the characteristic sound (traditionally, the bowl and neck were carved from a single piece of wood).  The saz also gets its sound from a relatively small, deep bowl, and no soundholes.  For my baglamas, I found a really tiny, deep box that gave it the real baglama sound.  Most of the CBGs I see here use relatively shallow, but longer and wider boxes.  For a saz or bouzouki, you probably want to find one that's not as long or wide, but is deeper.

I believe that x-bracing is traditional for the tops of instruments in this family - it's what I used, and it worked out well.

I'd really be interested in hearing how this turns out.  I've got nothing against the traditional, distorted uber-basic blues-machine that most folks build, but I have to admit that I find projects aimed at other kinds of instruments and other types of music much more interesting.

Permalink Reply by Cin wel on May 23, 2013 at 8:26pm
Yeah,it sounds like a deep box would be best.what do you mean by x bracing, where? It is really cool to see what unusual instruments people build.

Here's a link to a really amazing video showing the process of building a traditional staved baglama saz.  I believe I misspoke about bracing the top - the bouzouki (which descended from the saz) typically uses a thinner top with x-bracing, but this video shows a thicker top with no bracing being used for the saz - at least this maker's saz.

Here's what I meant by x-bracing, in this case, for an Irish bouzouki top: 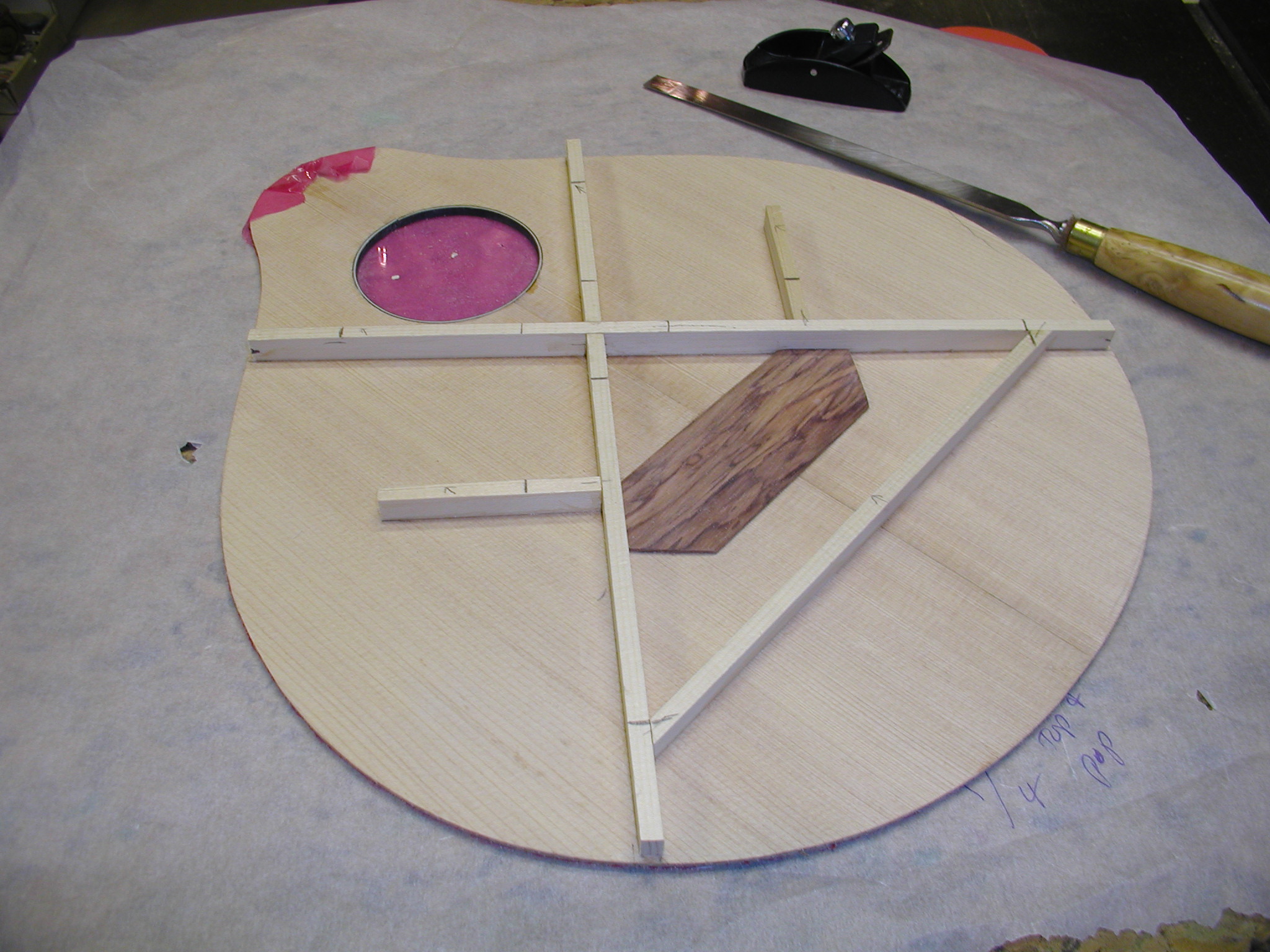 Before using much thinner tops and backs came into use, I believe the practice was to make the top thick in the middle, and taper it out towards the sides - the idea is to let the top move, like a speaker cone, so you want it kind of stiff in the middle and thin at the edges.  I recently finished an anglo-saxon lyre where I made the top that way, (also with no soundhole, similar to the saz), and it sounds really cool.

Permalink Reply by Cin wel on May 25, 2013 at 9:00am
Thanks for the link! The video was really interesting.I am going to use a deep cigar box,take my time on the neck, 3 strings, and actual cura saz strings, and see how it goes! Thanks for your help.

FIND FRET POSITIONS IN THIRTY SECONDS WITHOUT A COMPUTER OR CALCULATIONS THAT DRIVE YOU CRAZY.

String FAQ - let's get it going!

The difference between bass and regular guitar scales

New things you can do with a guitar fret template