Here's the Text, Photos and Diagrams from the article: 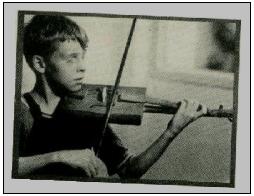 How to Make a CIGAR BOX VIOLIN
By P.M. Pennell
Popular Homecraft
February-March, 1940

A young maker tries out his cigar box violin

The kind of Cigar Box Violin that this article

describes how to build.

Anyone who loves music and is handy with tools can easily make a cigar box violin that is capable of producing really good tones. The violin may be designed for either two strings or four, depending on the maker's ability as a craftsman and aspirations as a player.

The musical range of the four stringed instrument is the same as that of a real violin, but, although the two stringed instrument is easier to make and to play, it has the compass of nearly all well known songs and melodies. Under supervision, a group of children between the ages of 10 and 15 made some very credible violins and later played them at several public affairs.

Materials include a wooden cigar box, a piece of broom or mop handle about 23" long, two smooth pieces of wood for fingerboard and tail piece, two small screw eyes, two (or four) ukulele pegs, a stout violin bridge, some short pieces of heavy wire, and glue, tiny nails, and some extra pieces of wood for nut, sound post and bass bar. The two string violin requires the violin A and D strings while the four stringed instrument uses a full set of violin strings. An old bow can be bought cheap at a music store or second hand store.

As cigar boxes vary in shape and size, the measurements given here must necessarily be approximate, but by following the basic principles, a playable violin will result. The children mentioned earlier built their instruments for four strings, but strung them up with only two strings until they had learned to play them. Also, the children's fiddles had slightly shorter measurements.

BASS BAR - Cut a piece of wood 1/4" wide by 1/2" deep, and the length of the inside of the box. Spread the edge with glue and glue in place near the sound hole. (Study Fig 1 for position). The bass bar braces the wood fibers of the top of the instrument on the side of the heavier strings. 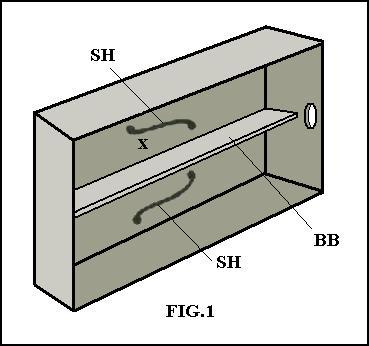 NECK - Flatten the end of the broomstick son both sides for a distance of about 5" to form the headstock. In the flat part, bore holes for the tuning pegs about 1" apart. File the holes until the pegs entering alternatively from opposite sides, come through far enough for the string holes to be seen.

ATTACHING NECK TO BODY - Cut a hole large enough to admit the broom handle in the end of the box. The edge of the hole should be about 1" from the top of the box with its sound holes , so that the fingerboard will slant at about the right angle toward the bridge. Pass the neck through the hole to the other end of the box. Secure in place with a screw eye and a few tiny nails. (See Fig. 1 and 2.)

SOUND POST - Make a small round post as long as the depth of the box and a little less in thickness than a lead pencil, Glue the end in place as indicated by X in Fig.1. Now glue the cover on the bottom of the box and add a few nails around the edge to hold it tight.

The sound post conducts the sound vibrations to the back of the instrument (whence they emerge through the sound holes) and also supports the top.

NUT (also called little bridge) - Make a wedge shaped piece of wood 1" long and a little deeper than the thickness of the wood to be used for the fingerboard. Flatten a small space on top of the neck about 1.5" from the pegs and on this, glue the nut securely. The top of the nut should be rounded and have two (or four) slight notches to space the strings and hold them above the surface of the fingerboard. (Fig, 2 & 3, and photo of neck detail.)

FINGERBOARD - Cut a smooth piece of wood 10" long, 1" wide at one end and slightly longer at the other end.(Fig 3.) For the two stringed violin, the top of the fingerboard may be left flat, but for the four stringed violin, it must be rounded to conform to the curve of the bridge (on one end) and the nut on the other. Glue the fingerboard to the violin with the narrower end touching the nut and secure with a (small) nail at the points where it touches the neck and the body.

Between the nut and the pegs, gouge out a piece of the neck (Fig. 2 and photograph of the neck). In this hollow, put a screw eye to hold the A and D strings in place. If four strings are to be used, bind a piece of wired at this point leaving an open space to pass the outer strings under (see photo.) 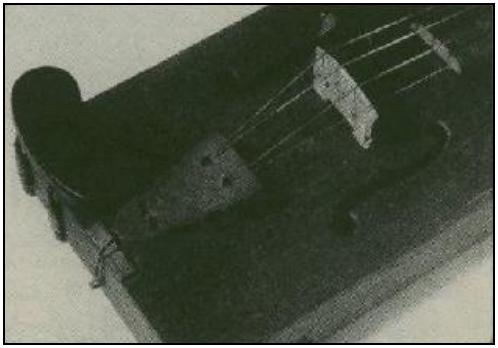 Photo Above: Top of violin, showing details of construction.


BRIDGE - File the feet of the bridge flat to fit the top of the violin. A high bridge is recommended. The top of the bridge should have two (or four) slight notches to space the strings evenly and to keep them from slipping out of place. Tie the strings in the holes in the tail piece, pass over the bridge, fingerboard and nut. The two middle strings go through the screw eye and the two outer strings go under the wire to the pegs. (Figure 3, and photograph). As you hold the violin facing you, the strings reading from right to left are G, D, A, and E, tuned in fifths. For the two stringed violin only the D and A strings are used. The pressure of the strings holds the bridge in place, but it will break unless kept standing up straight. The string length from the bridge to the nut should be 12" to 13". If when playing on the G and E strings, the bow touches the edges of the instrument, the edges may be shaped off a bit with a rasp or course sandpaper. Photo Above: Detail of violin neck, showing strings stretched over nut and under wire

and screw to pegs. Well I ran across another thread on CBN where a fellow by the name of  Nick actually build one of these and put photos of it up on his CBN personal page. They are quite interesting, so I have linked them in this discussion reply as a slideshow so we can all view them. Here they are:

Maybe I'll try my hand at building one of these before I try to build a fancy one like Diane in Chicago builds. Here's a photo of one of hers: I really like the sound holes, simple yet effective.  A beautiful box as well.

Wish I could take credit for building it (and having it in my possession), but this photo is one that was built by Diane of Chicago. She really does build beautiful CBFs (Cigarbox Fiddles). One day I hope to try my hand at building one like this. But first, I'll probably build a crude one like is described in the article by P.M. Pernell above. 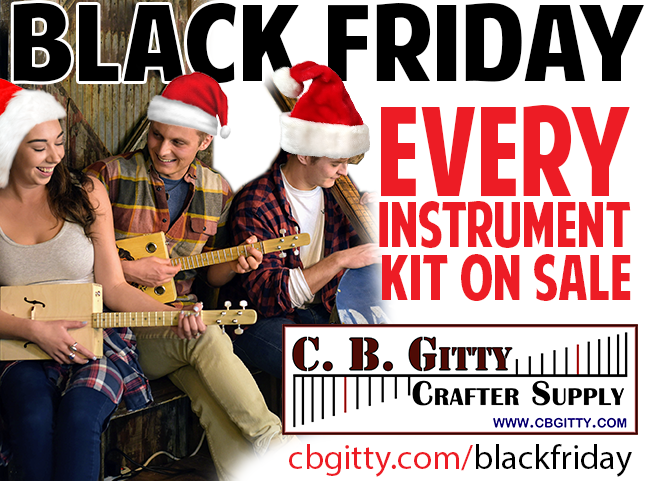 "Thanks Uncle ! believe he is upthere having a great time ,looking down on the Nation's …"
38 seconds ago

"Cool and a nice size.  Really adds to the music."
2 minutes ago

"That tenor sounds RICH!    A lot of work and ART in this one, Andries,  Old Dave…"
4 minutes ago

Results of a Banjo to Mandolin Conversion

For me a less known lyric and work from the late Frank Zappa in a tribute to his Work a rendition in my own style ,on a Gibson tenor 1934 . do enjoy !
17 minutes ago
3 Comments 1 Like

"Hello Doug ! thanks  For your kind words, i got the ideer of using the hubcap like a floating…"
24 minutes ago