Building Round Sound Boxes for Banjos

Recently while in the States I came across a series of videos that describe in detail how to build round sound boxes for banjos. In "banjo speak", the round frame for the banjo drum (sound box) is called a "rim" and it's been described as one of the more difficult parts of a banjo to build. However, the techniques shown in this series of videos provides a fairly simple method of building round banjo rims, assuming you have access to a fairly well equipped woodworking shop. This series of videos was produced by Richard Brown (aka "bordertownbrown" on YouTube and BanjoHangout). His technique is to cut out 16 identical trapezoid shaped "blocks" and then glue them together to form a 16-sided (hexadecagon) rim, and then how to round off the 16 corners with a lathe to produce a perfectly round banjo rim. Here are the links to each of the videos in the 7 part series:

Using the techniques he described, I was able to build a pretty good 13.1" diameter rim. But not being trained in using the lathe, I used a fixed disk sander to round off the corners to slowly form a fairly round rim. Using this semi-manual form of rounding I got into +/- 1/8" and if you look closely you can see it is somewhat oblong, but I was pretty happy with the result. Maybe next summer I'll return to the States and learn to use the lathe so I can do a better job, or else build some jig for the sander (or perhaps the band saw) that would allow me to feed in a hexadecagon rim and yeild a circular rim.

The main problem I had was how to figure out how long to make each of the trapezoid blocks. I just guessed and built a 13" rim instead of the 12" rim I was trying for. If you are aiming to use an off-the-shelf manufactured banjo head instead of doing something custom, this measurement is important. As I recall typical rims are like 11" or 12". So, the big question is how long to make each trapezoid block to yield a particular diameter banjo rim?

I am working on a general solution to this problems. I have been able to make some mental leaps to come up with what seems to be the right answer, but since I'm now in China, I can no longer prove the solution by building one. So, in the next few days I see if I can come up with a complete logical proof. In the meantime, I welcome any input you may have.

My current solution is to subdivide a circle into 16 pie slices where each pie slice is an isosceles triangle. The vertex angle of the isosceles triangle is calculated by dividing 360 by the number of sides. In this case 360 / 16 equals 22.5 degrees. The length of the two equal length sides of the isosceles triangle should be half the length of the desired diameter of the banjo rim. If we want to build a 12" rim, then the two sides will be 6" in length. I found a triangle calculator on the Internet, specified the vertex angle and the length of both sides. I adjusted the base angle until they were what I think they should be [(180-22.5)/2  = 78.75 degrees]. The answer it gave was 2.34 inches.

So, to build the 16 trapezoid blocks, start with a long length of wood about 3/4" thick and for each block cut off the two short sides by 11.25 degrees as shown below. Cut using a chop saw as shown in the video, turning the the supply board with each cut so that the block will have this trapezoidal shape. 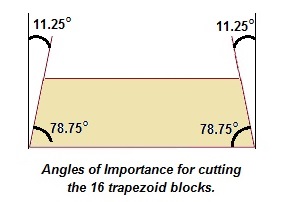 Then, once the 16 blocks are cut, use some blue painters tape and a straight edge (board) to align the 16 trapezoid blocks and then wrap it into a circle. Measure the result. It should be very close to 12" in diameter. But this diameter will be truest at the corners of the rim, which will get trimmed off on the lathe (sander or band saw). So, it seems we will need to make the width a bit wider, maybe 1/4" wider (I'm not sure), so that when we trim the corners, the final rim diameter can be cut spot on.

Well, that's all I have for now. Will update this tread as I gain more experience, and you are invited to comment on it if you have any additional info to provide.

If we increase the length of the two sides of the isosceles triangle by 0.25" (to 6.25"), the calculation for the base will increase to 2.4 degrees (up from 2.34 degrees). So the trapezoid block dimensions for a 12" rim should be:

This change is recommended since after the 16 blocks are assembled into the 16-sided polygon frame, the 16 corners are either cut or sanded down to the final size. It's better to error on the large size, because you can always cut a little more off.

Whether 0.25" is enough of a fudge factor (or too much of one) remains as an unknown. But, on my 13.1" frame, I don't think I sanded more than 1/4" off the corners. I'll have to pay better attention next time. I guess once the frame is built, you could actually measure the difference in diameter between "flat sides" and the corners. The fudge factor should be half the difference. Then run that value through the calculator. The calculator I used was at this URL: http://www.visualtrig.com/Angles.aspx

In the videos, as I recall, the block thickness was 1". He was using 1" x 1" stock. My octagonal sound box uses 1.5" x 3/4" stock and it seems plenty strong. The 13.1" diameter rim I build was custom cut wood, and I forgot to make a note of its size. So, the thickness of the rim may vary from builder to builder, but since weight is a concern, using a thinner rim yields a lighter "pot".

Unless you are building a banjo with a wooden soundboard, I think a good strategy is to have the banjo head, tone ring and tension hoop on hand for the final stages of the rim build as they sometimes vary a bit in diameter from the way you might be interpreting the specifications. With the parts on hand, you can fine-tune the shape of your rim to better accept the tone ring and banjo head.

Modern banjo heads are made of Mylar (or similar material) are most commonly available in 11" diameter. So, a 11 inch diameter rim is probably a better target, though 12 inch diameter Mylar heads also can be found. The advantage of Mylar heads is that they are not affected to changes in the weather (heat & humidity) as old fashioned skin (animal hide) banjo heads are.

Banjo heads and tone rings can be purchased from Stewart-MacDonald (http://www.stewmac.com) or eBay. There are two types of tone rings: "flathead" and "archtop". If you are building a flat top banjo, then you'll want to go with a flathead tone ring, which means you will need a banjo head with a "medium" or "high" crown. If you are building an archtop banjo, then you will need an archtop tone ring, and a banjo head with a "low" crown. The following table summarizes these crown measurements:

It might also be advisable to read the comments buyers have made at the StewMac website to get a better idea which brand and model of banjo head is right for your project.

Also, since tone rings and tension rings are expensive, does anyone have good experience using (re-purposing) other less expensive hardware for this purpose? If so, please enlighten us. A cheap tone ring and tension hoop will set you back something like $50 a piece (and that doesn't include all the hooks, nuts and other hardware you may need to buy to finish off the banjo!

Here is a recalculation of the trapezoid block size for a 11" banjo rim including a 1/4" fudge factor for when the corners have to be rounded off the rim by lathe, sander or band saw. 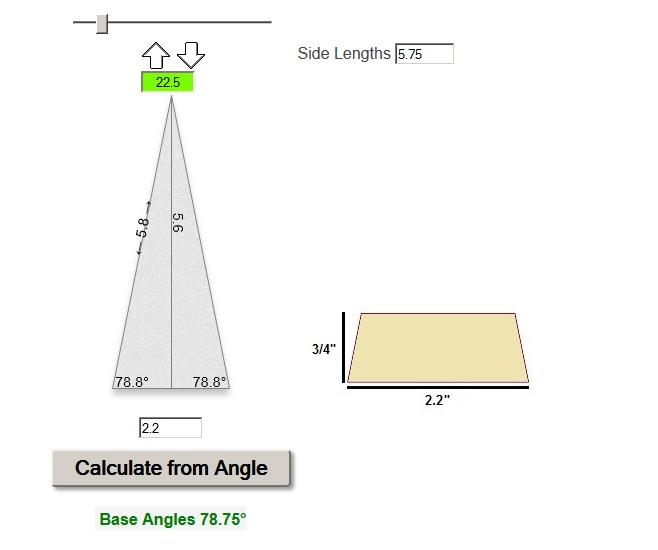 Here is his drawing for the trapezoid: 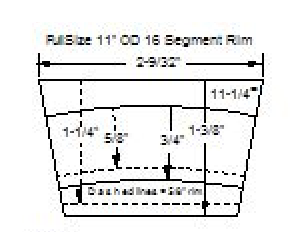 not technicaly a banjo, but banjo-ish

Building Round Sound Boxes for Banjos

4 string or 5 string banjo for blues?

a free banjo album, sort of

Hi uncle John, I thought the same thing and I searched hi and low, even checked the gang show video…See More
48 minutes ago
0 Comments 0 Likes

"GOD REST HIS SOUL" by Gregg and Duane Allman

"Thanks Jim for the reminder via a historic song! I learned something new. God bless."
4 hours ago

"Wow! That is going to be one standout uke. I hope we will get to see and hear the finished build…"
4 hours ago