I have been looking for a decent chord calculator for transposing to and from different tunings, different numbers of strings, completely different instrument, (anyone with a collection like mine knows what I am talking about!)

I havent really found anything that is flexible enough for the vastly different instruments, but I have found some ways to think it through and am beginning to make some progress on learning this.

First suggestion, print out a note circle and study it. Know the 12 notes by memory. This is the core of all music theory in my opinion, and why it seems so hard I dont know. Its 12 notes. Memorize it. Burn it into your brain. Say them in your sleep. Name you kids and pets from it. Well maybe you shouldnt go quite that far......... 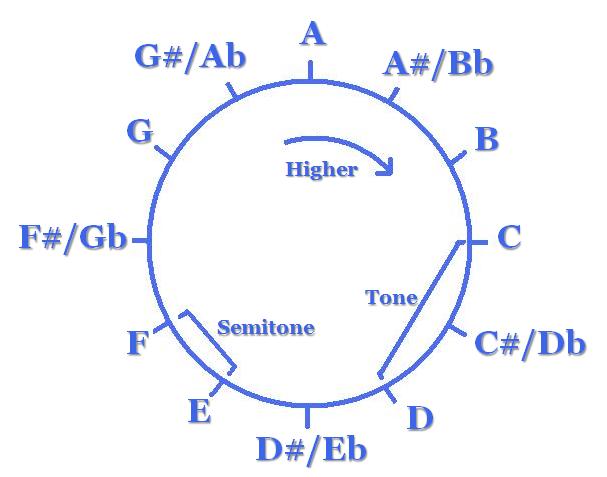 The next thing is to find a method that helps you visualize where you are. Be it a picture of a keyboard in your mind, sticky notes on your keys or neck, whatever it takes to hammer it into your brain.

Heres one calculator that helps me figure chords out sometimes. It just works for me, if its not for you, find something that is.

Oh, and keep it fun people! 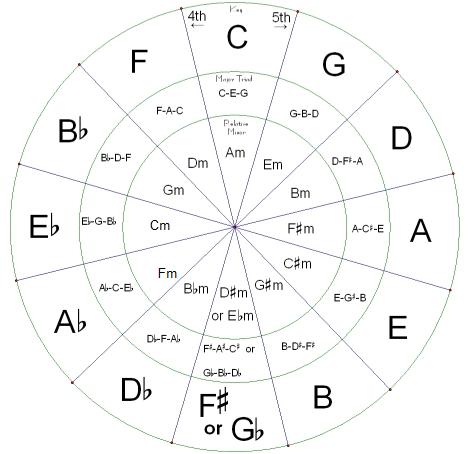 The has the notes of the major triad for each note, and relative minor chord.  As you go clockwise from a note, it is the 5th of that note.  Counterclockwise, it is the 4th.

Thats a good wheel too Steve, theres a lot there. Thanks for posting it.

I was trying to use a simple one for the basic 12 note memorization theory I was trying to explain, as I think I am not the only one who struggles with the basic stuff in my efforts to move from improvisition and playing by ear to learning how this stuff works. I studied all this when I was young, but much of it never really stuck with me.

I think it would be great if you gave a little more explanation of this "more advanced" wheel. I might screw it up.

For instance, what does the "4th" and "5th" mean, and why is it different in the two directions? What do those inner rings mean? (Major and minor relationships to the root keys)

Jump in here with some lessons folks, starting with the very basics please, for the  seriously thick headed people like me. (Maybe I'm the only one.)

For relative minors, I steal from http://www.guitarlessons.com/guitar-lessons/relative-minor-guitar-k...:

The D major scale is spelled D, E, F#, G, A, B, and C#. If you start on D and count up to the 6th scale degree you would land on a B note. The relative minor key of D major is B minor. When we say that a minor key is relative to a major key that just means that those two keys share the same key signature. The key signature for D major is two sharps, F# and C#. The key signature for the key of B minor is also two sharps, F# and C#. Remember if you want to find the relative minor of a major key just go to the 6th degree of that major scale.

This is cool, but you may be wondering how to apply this to your playing and make it useful to you. First of all, if you know your major key signatures this can help you to memorize your minor key signatures. The second, and more exciting, thing that you can do with this idea of relative minor keys is scale substitution. Here is what I mean. If you have a vamp or a groove that is in the key of D major you can use a D major pentatonic scale to improvise over that chord. If you know that B minor is the relative minor key for D major, you could use a B minor pentatonic scaleto improvise over the D major chord as well.

STOP baffling yourself with bullshit !!!

a chord is made of alternate notes in the scale.

just skip every other one over and there you are.

forget the letter names, accidentals, put em right out of your mind.   If you wanna pay a fretted instrument you do not need this mindfck..  think in numbers.   one to seven.  thats it.

if you wanna decode a chord chart from A,B,C etc to numbers check out the huge debate on the subject with that other youngster, I designed a little tool on that thread that will decode any 1,4,5 progression for you.

Mark, a fourth and a fifth are actually the same thing, only inverted.  a fourth one way is a fifth the other way.

Dr Steve the root, 4 and 5 are the 1,4,5 in a lot more than just blues baby, its a universal law of the first mode of the major scale. also, the D major penta and the B minor penta are EXACTLY the same scale, so yeah, of course they substitute! :D

If you really want to understand WHY B is the relative minor to D, try spelling out and comparing the triads ;)

If you want a shortcut around Key signatures I recommend the AWESOME key calculator for iPhone from BAMSWORLD.  only $2, it was coded by a good friend of mine and I had a small hand in helping him design it (I dont want to overstate my contribution, the guy is VERY clever and a great musician, I made suggestions is all..   I have no financial interest)  This app will give you all the correct chords that work together in any mode and key, a great compositional tool.

I like the way you put it Jef, thanks for that.

a chord is made of alternate notes in the scale.

just skip every other one over and there you are.

forget the letter names, accidentals, put em right out of your mind.   If you wanna pay a fretted instrument you do not need this mindfck..  think in numbers.   one to seven.  thats it."

But for the record, I wasnt asking what 4ths and 5ths are for me, so much as it was a rhetorical question, asking for some people to explain for the group what some of this means in plain basic terms. The same questions come up again and again and as Jef has pointed out in his response, a lot of it can be just confusing terminology. Stuff like these charts can be of use, but some explanation and so forth is needed to go along with them, dont assume everyone can look at those and "get it"! What I was looking for was for Doctor Steve to explain the chart in more detail.

Jef, maybe a link to the discussion you refer to would be useful too?

"The root, 4 and 5 are the 1,4,5 in a lot more than just blues baby, its a universal law of the first mode of the major scale. also, the D major penta and the B minor penta are EXACTLY the same scale, so yeah, of course they substitute!"

"If you really want to understand WHY B is the relative minor to D, try spelling out and comparing the triads"

Seriously, I dont mean to be a pain, but I cant be the only one who says "cool, that makes sense" then looks at the chart and thinks, wait.....what?????

an interesting thing to notice about the triads is they are built of two stacked thirds.   Now occasionally you will get two minor thirds (a diminished chord)  or two major thirds (an augmented chord)  but usually its one of each.

is that enough 'baffling with bullshit' for one day?

you cant ask ppl this stuff btw, at least a good 65% of us cant..    you gotta practice scales until it all falls into place.

I was asked to build a 5 stringer CBG and did a little research, I found this site helpful.

BrianQ. left a comment for Larry Sobol
"Here’s how to Add Pics,Vids,Content: Heres how to add Pics in a Topic…"
12 hours ago

BrianQ. left a comment for Larry Sobol
"Larry, to message someone, just click on their icon & you will go to their page? Pretty much…"
12 hours ago

Larry Sobol commented on Poorness Studios's blog post Saying Goodbye To a Long Time Friend
" Remember all the joy that Ellie brought into your life. It can be extremely hard to lose a…"
14 hours ago

Larry Sobol replied to Larry Sobol's discussion Aluminum License Plate in the group Building a Cigar Box Guitar 101
"Brian. Larry Sobol here. Thanks for the link to the Video. Just found Mike Simpson to thank him as…"
15 hours ago

Old School Blues - from the webpage https://www.reddogguitars.com There is CBGs for sale and more cigar box music#cigarboxguitar #3stringguitar #reddoggui...
15 hours ago
0 Comments 0 Likes

"That’s encouraging Brian! We try to surprise and delight when we can. I have to admit, I have…"
18 hours ago