Recently I have become interested in pentatonic scales. This interest came about after modifying one of my 2-stringer CBGs so it would become a chromatically fretted instruments. The original frets were white tie-wraps, and for the new frets (for all the accidental notes (i.e. sharps& flats)) I used black tie-wraps, producing an instrument with color coded frets (white for naturals and black for accidentals, just like piano keys). I did this because I wanted to learn the chromatic fretboard better. But, in experimenting with the instrument, I found that playing just the black frets produced tunes that sounded very oriental. This effect was also due in part to my use of nylon strings (actually Aquilla Nylgut) instead of steal strings and metal frets.

Recognizing that the Chinese also had several pentatonic scales of their own, I thought that making a CBG with a Chinese pentatonic scale might be something that Chinese people would be interested in. So, I have been researching the topic on the Internet and came across this very interesting site entitled "The Theory Behind Chinese Music". This seems like a pretty appropriate topic for this discussion group, so let's explore this together.

Here's some more information I pieced together from several sources on the Internet,
including Wikipedia.

In traditional Chinese music there are several pentatonic scales based on the
Chinese chromatic scale called the "12 Lü" (Chinese: 十二律, Pinyin: shí èr lǜ).
This chromatic scale was derived in the using the same calculations as Pythagoras
did, based on 2:3 (perfect fifth) ratios (8:9, 16:27, 64:81, etc.); known as the
Pythagorean intervals. Although these 12 Lü frequencies approximate the 12 known
in the West, some of the notes are a bit flat or sharp to our ears because the
Chinese system does not use equal tempered tuning.

Most Chinese music uses a pentatonic scale, with the intervals (in terms of lǜ)
almost the same as those of the major pentatonic scale. The notes of this scale
are called gong, shang, jue, zhi, and yu. By starting from a different point of
this sequence, a scale (named after its starting note) with a different interval
sequence is created, similar to the construction of modes in modern Western music.

The ancient (pre-Tang) names of the five notes of the pentatonic scale are:

The five notes roughly correspond to: do, re, mi, sol, la

Working from this tip: So, I guess I'll get to work on building one and see how it plays.

I noodled out a pentatonic 3 string guitar with open 1 5 1 tuning.  It takes a lot of split frets, but I still mean to tackle in one day.  Here is a diagram I came up with: 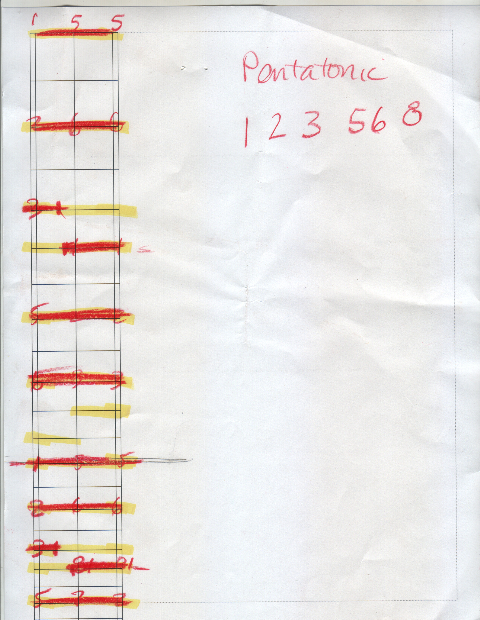 Permalink Reply by Keni Lee Burgess on January 8, 2011 at 3:03am
Chinese Qinqin or chinchin. A wonderful 3 string instrument. Often in the Summertime, I listen to two gentlemen performing in NYC. The other man plays the Erhu. Enjoy.

Yes, that is a beautiful and traditionally made Qinqin. It also appears to be fretted chromatically. Do you know if this is really the case? I have a cheap Qinqin that looks like more like a banjo with the brand name "Romance" which looked like it might be diatonically fretted, but turned out to be fretted in some very odd fashion. I still haven't figured out what it was. I have since torn out the original frets and re-fretted it using nylon tie-wraps (my trade mark it seems) until I get confident enough with my fretting skills to re-fret it properly (with real fret wire and the like). I plan to fret it diatonically. It sounds good with the nylon tie-wrap frets, but is rather muted. I'm hoping with metal frets and steel strings it will sound more like a banjo. A banjo-like strum stick is what I'm hoping for.

I'd like to know more about how the Qinqin is supposed to be tuned, and what kind of music your friend plays on it. When I Google on the Hanzi for Qinqin, I can get a bunch of articles on the Qinqin, but they all appear to have been written by the same person (or extracts thereof). They say the Qinqin is more often played in Guangdong province and is played in the Cantonese Opera as an accompaniment instrument (not a solo instrument). The only time I saw one played (and not too well) was in the street of Hong Kong by a street player (an old lady, who was sitting in a door way). I listened for about 5 minutes and gave her 20 HK$ so she would be sure to have dinner that night.

Chinese Qinqin or chinchin. A wonderful 3 string instrument. Often in the Summertime, I listen to two gentlemen performing in NYC. The other man plays the Erhu. Enjoy.

I am hoping to implement a fretboard without having to resort to split frets. I was thinking about implementing it on a 2 stringer, but I see there are many different pentatonic scale implementations, and I wondering what the best one might be, hoping for something nearly true to the Chinese way. I was thinking of checking out their stringe instruments to see if there was something I could copy.

If I want to do just any old pentatonic scale, I could use what I have already discovered: the black frets on my 2-stringer. That instrument is tuned D-d. I'd need to add a tie-wrap for fret position 1 (acting as a capo) to start with D# open tuning. Then I'd have the following:

But in thinking about it just now, maybe I should make it look more

like a piano keyboard by starting out with middle C#. I think you get

the idea. The second string would try to reach down an octave lower.

a diatonic scale, instead of thinking afresh and starting from a Chromatic Scale.

For me, when attempting for a authentic Chinese pentatonic scale, I'll probably

have to start at the Chinese chromatic system (the 12 Lü ), as they don't employ

equal temperament, so some of the notes sound a bit off compared to the Western

I noodled out a pentatonic 3 string guitar with open 1 5 1 tuning.  It takes a lot of split frets, but I still mean to tackle in one day.

The Chinese guzheng (古筝, gǔ​ zhēng) appears to be the most popular Chinese stringed instrument that still uses the pentatonic scale. 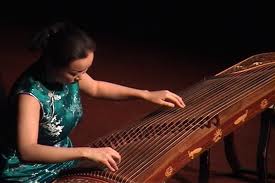 The guzheng is basically a zither with between 13 and 21 strings. The 21 string model seems to be the most popular and it can span 4 pentatonic octaves. The guzheng is usually tuned in D Major pentatonic (D, E, F#, A, B). It seems to me that this instrument could be emulated on a 3-Stringer CBG with careful design. For sure it could be done on a 4-Stringer where each string covers one octave. Let's call the four octaves O1, O2, O3, and O4 from the lowest octave to the highest (pitch-wise). String 3, the bass string could handle O1 and O2. String 2 could handle O2 and O3. And String 1, the melody string, could handle O3 and O4. As the longest string on the guzheng is 88cm (about 35"), it could be that we need to do a very long scale length. But for the first go at it, I think I'll try to keep the scale  length down around 24" or maybe 20", and maybe use heavier strings.

It seems like my fret calculations from yesterday working from the tip that do, re, mi, sol, la represent the notes of the pentatonic scale will work with D Major Pentatonic (and probably all the other Major Penatonic scales). So, I guess I'll build my neck and fretboard to those specs and tune it to D Major Pentatonic and see how that sounds. I can then take it around to some of the music stores and see if they can have me compare the sound to the guzheng they sell (if they'll take the time to humor a wai guo ren (foreigner)).

As long as I'm building a Chinese style CBG, I may as well give it a Chinese style headstock and tuning pegs. I found a few pictures that illustrate the idea from this Japanese DIY website.

Here are a few pictures for a better Idea... 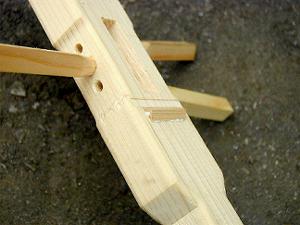 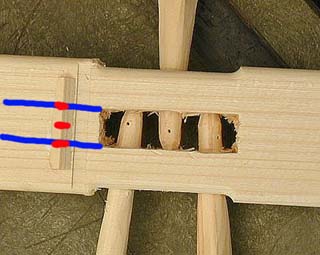 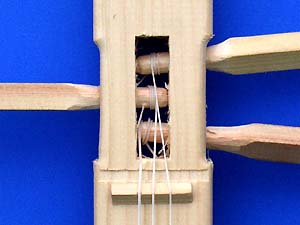 It will be a while before I build this instrument, as I need to do some testing with scale length and fret positioning first. So, right now I'm working on the prototype pentatonic fretboard which I'll put in my "testbed" 3-Stringer (the one I used for the Bluescimer scale I built last week.) This fretboard is "drying" right now, after epoxying on the cut nail frets. Will then clean it up and hopefully test it out later today. It will be tuned to D-D'-D'', so as to emulate the Chinese Guzheng's D Major pentatonic scale over 4 octaves.

I've built and tested my 'D Major Pentatonic' fretboard for my 3-Stringer testbed CBG. My first reaction was that the sound was not oriental sounding at all. If fact the notes sounded quite familiar to me, as though I've heard them before in folk and mountain music. Then, I noticed how similar the Major Pentatonic fretboard was to the Diatonic fretboard. Most of the fret positions were the same, and the notes were indeed the notes I have heard many times before on my D-A-D tuned diatonically tuned stick dulcimers (canjos, CBGs and strum stick). This Major Pentatonic fretboard was made using the Western chromatic scale as is expressed in the Stewart MacDonald fret calculator . What I now need to do is to find a way of calculating the fret positions using the Chinese 12 Lü chromatic scale (more research). Then do another fretboard to determine if that one will sound more oriental. Another reason it may not sound oriental is that I'm using metal cut-nail frets and steel strings. So, I think the next thing to do is to change out the strings to nylon or Aquilla Nylgut. I shot the following photo comparing the three fretboards I've made so far: Major Pentatonic, Diatonic and Blues Scale ("Bluescimer").

Assuming the instrument is tuned to D, I've labled the notes for each fret-position and circled those which were the same. Fret 0 (nut) is on the right. To enlarge the photo for easier viewing, just click on it. Hope this comparison is educational. If you find any errors, let me know. I'm no expert.