"Even a crude dulcimer can have an attractive tone and be as easy to play as more sophisticated ones."

A CALL TO IMPROVE THESE PLANS:  These original plans from 1973 give us a rough outline for making a simple hammered dulcimer.  However, they contain some vagueness when it comes to design and parts.  For example, the author suggests using "sturdy nails" as hitch pins.  What exact nails would you use?  Also, he recommends a 2x4 as the frame, but wouldn't the softness of the pine wood eventually release the zither pins and cause tuning problems?

I encourage you to post your improvements in the comments below.  If you build a hammered dulcimer, take some time to post a builder's diary of the process.

About these plans:  In researching various obscure musical instruments, I have discovered the treasure trove of information from Mugwumps, a now defunct magazine originally published by Michael Holmes of Silver Spring, MD.  The bi-monthly journal celebrated old time music, unusual folk instruments and served as a classifieds for the emerging bluegrass community of the 1970's.

I was just working on Gitty's marketing when I stumbled across this customer submission for a 19 string mahogany monochord instrument.  Note the string anchor system that uses Gitty's Chrome Cup Style String Ferrules. See the original post here. 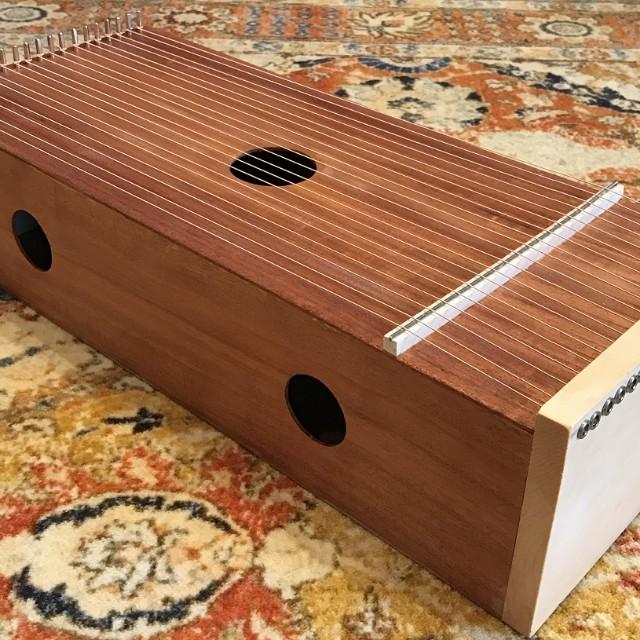 Thank you for this!   Shame the plans  doesn't give the  measurements for the spacing of the tuning pegs

Thank you for the plans.  Shame it doesn't give the spacing measurements to the tuning and hitch  pegs

Permalink Reply by Steven Bruce on January 26, 2019 at 10:22am
I built a zither aeolian harp a couple of January ago. It's based the 2 x 4 lap steel model. I just kept both ends of the two by four lap steel and made a box around them. Then added 12 Zither strings bridge and nut. The string hitches are the same as on the 2 x 4 lap steel. Scissor pins have never clown loose in two years time. Just make sure you drill the proper size hole. Scissor Pens have superfine spiral threads! They will screw in and out.

Permalink Reply by Steven Bruce on January 26, 2019 at 10:25am
Stupid speech to text. I meant to say zitherr pins have never come loose in two years time. Scissor pens translates to zither pins. If I can figure out how to upload upload photos, I will do so. I'm a little bit technologically challenged here.

Let's try this: here is a photo of my zither/aeolian harp, as described in my post this a.m..  BTW, you can use chalk on the zither pins to help keep them slipping. Powder chalk specifically for pins is available, I just used strait-line chalk, you know, like for snapping a line. Drop some in the hole and shake out the excess. The text specifies piano pins. They are considerably larger than zither pins and will probably work OK in a pin block made from a two by four, at least for a little while. With the smaller zither pins (a better choice, in my opinion) it will be necessary to use a harder wood. Maple is a good choice. Use a sharp drill bit, clean holes will hold tuning better. Don't make the holes too small, the block will split when all the pins are turned in. The pins should be just tight enough to hold the string tension. It will help to set up a test jig made of the same material as the pin blocks you will use. Stretch a string over three bridges between a hitch pin and tuning pin and see what happens with different hole sizes when tuned to pitch.

I use a jig to drill the pin holes. Lay out the pin pattern on a 1-1/2 or 2 inch thick piece of hardwood and use a drill press to drill the jig. It can then be clamped to the dulcimer body and used as a guide for a handheld drill. If desired, bevel the bottom of the jig to create angled pin holes, a better design.

I prefer to use desk pins as hitch pins, but nails will work. Be sure to drill pilot holes for the nails. Don't just pound them in with a hammer, that will encourage splitting. The string tension on a hammered dulcimer is formidable. Hitch pins should definitely be set at an angle. Use the test jig to determine the best size of nail to use. A six or eight penny finish nail might be a good place to start. Nails are soft, don't let them stick up too far or they will bend. Keep the string wrap close to the block.

Good luck. It's been a while since I made one of these, but I remember that the hardest, most tedious part is stringing it up.

I though I’d share this info to contribute to improving the plans. Mileage may vary!

The article from the Smithsonian talks about using hardwood in the side rails and zither or piano pins.

As for the stout nails I had a thought: https://www.modeltrainstuff.com/micro-engineering-g-30-102-large-sp...

These are ½” long model rail spikes. I’m not sure but these may be the same Stewart MacDonald banjo 5th string capo: https://www.stewmac.com/Materials_and_Supplies/Accessories/Capos_an...

I home made flat ended zither pins from nails using a highly technical cold forging process dating back to the earliest recording of blokes in sheds. I hit it with a hammer to flatten the end. Then I used the smallest drill bit in my set (1.6 mm) to make holes I could feed the string through. Pre drill the mounting hole just a tad smaller like you do with regular zither pins and hammer it home.   More details in the instructable and also plans for a tuning tool. Steps 7 and 8 respectively.

Started by the anonymous pick in Other stuff - off topic, fun stuff, whatever. Last reply by BUGGY (C) on Thursday. 10 Replies 7 Likes

"Thanks, Uncle John! It's great to be building again!"
1 hour ago

The man, the legend, Dave Lynas.

Carl Floyd replied to Infirmity Citrus President's discussion Your take on this bizarre guitar
""I have a picture somewhere of a guitar with 5 necks" Years ago (1981), Cheap…"
1 hour ago

"You are making some high level stuff, Scott!"
4 hours ago

The man, the legend, Dave Lynas.