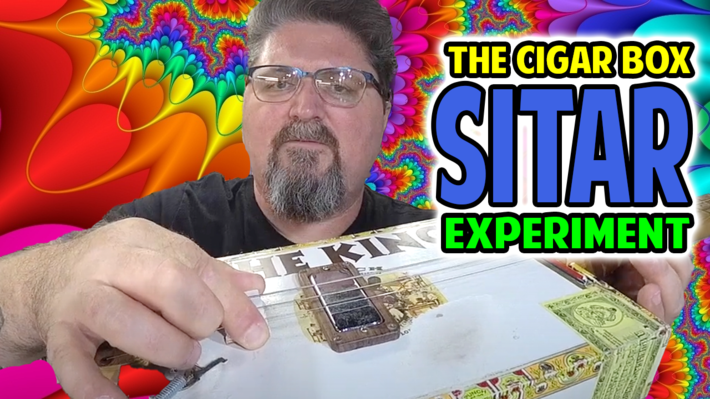 I've always been fascinated with the sitar.  The buzzing, droning and string bending sounds are unlike anything out there.  If the Beatles used sitar, I wanna use sitar!

In the past, I've used the flat side of bone slides to get the buzz. A bleached dog bone from the pet store was used as a slide in my song, "Bone to Pick" from my album, Jug Fusion.

I've also used simple 1/5" buttons from StubbySlide.com to provide the buzz, as shown in this video.  (If you want to get a sitar sound today, just get a button and rip off some world music leads like this):

Sitars get their buzzing sound from a flat bridge made out of bone, called a 'jawari.'  There are two jawari bridges on sitars, the 'tar jawari' which is higher and is used for the strings that are fretted, and the 'tarab jawari' bridge which lifts and buzzes the sympathetic strings.

It was the lower bridge that I purchased for this new experiment.  It's sold as "Banjira Sitar Sympathetic Bridge" on Amazon.  (Link) 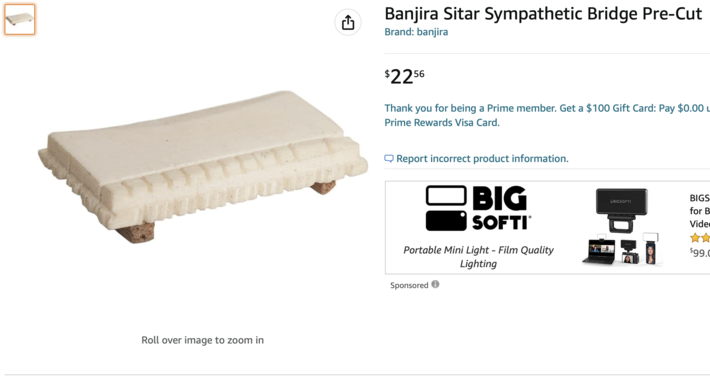 The bridge is just under 1/2" high and has two little wooden legs on the bottom.  I found it to be the best choice for replacing a cigar box guitar bridge, as seen on this instrument built by Casey Baron.  In the video, you will see me tweaking the angle of the bridge to get the best buzz.  This is common with sitars and there are master instrument makers in India known for their expertise in getting the maximum buzz.

Watch the video and then scroll down for more info.

Some thoughts on the tone of this cigar box sitar:

Because of the guitar strings used on this instrument, the sitar bridge sounds more like a 1960's Coral Electric Sitar than a real Indian sitar.  I plan on making a dedicated cigar box sitar that uses thinner strings.  This chart for a pack of La Bella Sitar Metal Loop End Strings shows just how light the gauges are: Using this chart, I can simply purchase bulk guitar strings at CBGitty.com to approximate the traditional sitar.  I also plan on using jumbo/high fretwire for easy bends.

Do you have any ideas or thoughts on building a cigar box sitar?  Post them below.  (Remember to hit the HTML tab in the text box before posting your response.  This old website is cranky and has a few wonky ticks to it.)

Permalink Reply by Michael shrader on June 14, 2022 at 11:03am
Great idea. I’ve been intrigued with Sitars and even considered buying one. Not anymore! I want to build one from a cigar box! Who woulda thunk? I guess Shane would. Looking forward to using your build as a guide.

Now imagine that alongside a cigarbox tampura!

Poorness studios Kale will be all over it I`m certain ;)

Tried that sitar bridge and didn't get very good results. What worked better for me was a short scale,  light gauge strings, a lower than normal tuning so the strings are loose and then a little bit of tin foil by the bridge.  The fret buzz  that we normally fight so hard to eliminate becomes your friend and it sounds like a sitar.

Started by John B Treutlein in Performances, How to Play, Lessons, Concerts. Last reply by Taffy Evans 8 hours ago. 4 Replies 4 Likes

John B Treutlein replied to John B Treutlein's discussion String grounding
"I believe in this process I read of a player in ,ithink the Eagles,died under rather,uh extreme…"
8 hours ago

Taffy Evans replied to John B Treutlein's discussion New member with a new build nearly done
"Haha, I had every faith in you. Taff"
8 hours ago

"Wow! Cool instrument to restore Alan. It’s  a tuning extravaganza, certainly not for the…"
8 hours ago

"Oh yeah! Sweet CBG T-Gripped. A fine vintage box and a build worthy of it."
8 hours ago

"Thanks Kale! I see you are handling the 7ths and minor chords the same way I am."
9 hours ago

"Thanks Kale and Uncle John! I do like the variety of songs that the Slingers choose. It definitely…"
9 hours ago

Trying to mix metal and wood on a reso - ran thru a budget Mustang Amp- from the webpage https://www.reddogguitars.com There is CBGs for sale and more cig...
9 hours ago
0 Comments 0 Likes

This is an original song as a tribute to Johnny Cash who we adore and respect! We love the reason he wore black, in fact, “He wrote the song ‘Man in Black’ t...
10 hours ago
1 Comment 0 Likes

Taffy Evans replied to John B Treutlein's discussion String grounding
"Hi, with respect to Brian's comment "it's good practice", my thought is to not…"
10 hours ago