The story behind the "Damned if I do..." guitar

Last week, I stepped into my woodshop with the goal of capturing struggle, poverty and The Blues within the artistic side of cigar box guitar building.  I put a cd of Crying Sam Collins & His Gitfiddle in the stereo and started scanning my parts bins for mean and deadly looking parts.

This guitar would be built with a large wooden Punch Cigars box.  The bigger the box, the better the sound – and I wanted this one to be a good sounding guitar.  The neck would be poplar, a poor-man’s alternative to maple, but always a great choice for a slide guitar since warping isn’t a factor. 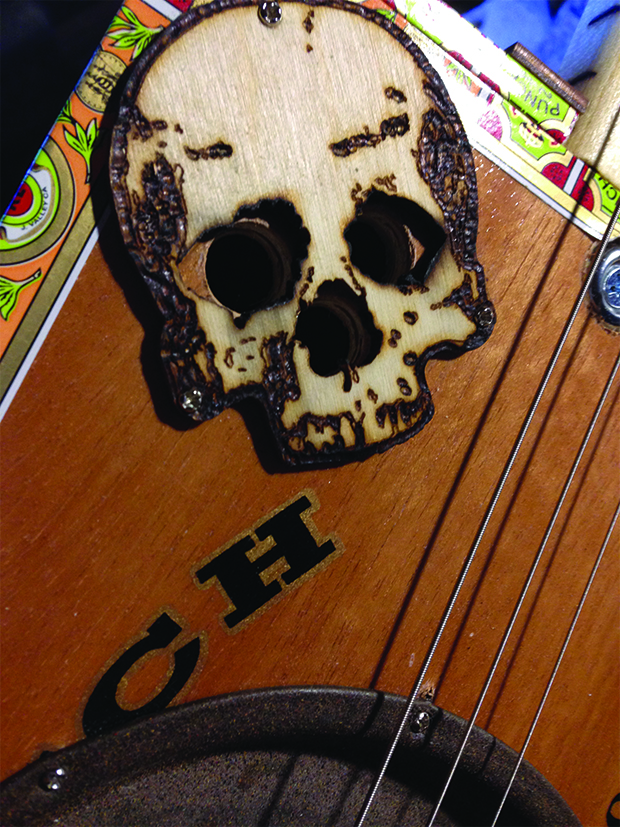 I needed parts, and my woodshop is filled from top to bottom with random parts.  The first thing to jump out at me were these skull soundhole covers I bought from C. B. Gitty guitar parts for six bucks.  The original covers featured lightly burned lines in the artwork, created by a CNC laser machine.  I pulled out my woodburning pen and darkened all the lines, giving it a truly deathly look.

Ok, so this guitar would have death as a theme.  But those Crying Sam Collins songs were demanding something more.  Something creaky, out-of-tune (as often was his guitar) and poverty-stricken.  This instrument needed to be 100% lo-fi and trashy. 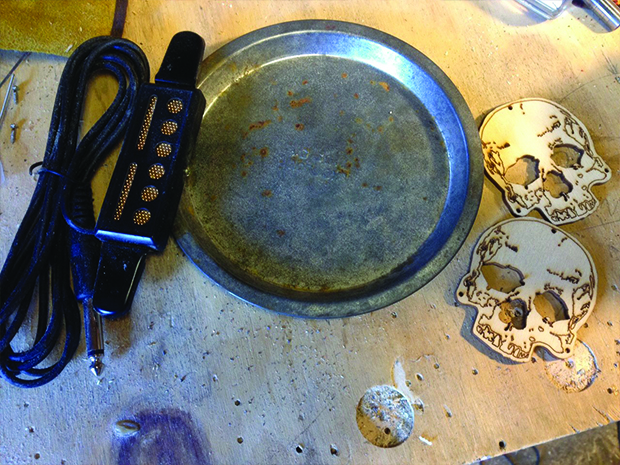 On the shelf in my woodshop, I have a stack of 5-inch mini baking pans from the 1950’s.  These little metal pieces make wonderful cigar box dobro cones.  I had found my first set in a thrift store and now I scour eBay for them every day.  (No, I won’t divulge the brand name or product number.  They’re hard enough to find already!)   After cutting the huge hole in the box, I installed it with some tiny guitar tuner peg screws. 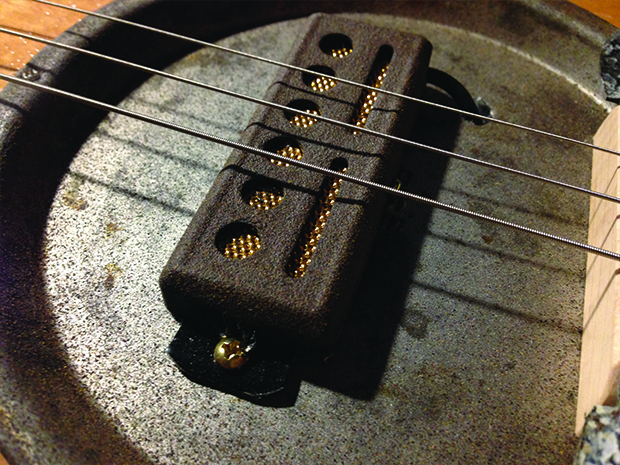 With a rusted baking pan as a resonator and skulls for soundholes, I needed the right pickup to make it electric.  I chose the $14 Gitty Gold Foil acoustic soundhole pickup that I have featured in many of articles not just because I knew it would give me a snarling sound, but also because its low profile would fit right on the pan without any extra routing.

How to Mod a Gitty Gold Foil Acoustic Pickup to become a top-mounted electric pickup:

The neck was the last piece of the puzzle in this desperation blues guitar.  I wanted to woodburn a phrase, saying or several words that captured the essence of the blues.  Absolutely no blues clichés about voodoo or mojo.  Bullshit like that is way overused.

And then I heard something coming from the stereo…

I’d rather see my coffin come rollin’ in my door.

Hear my woman say, that she don’t want me no more, Lord.

I ain’t got no lovin’ baby now.

Crying Sam was singing Graveyard Digger’s Blues – sorrowful and resigned.  Between the Jim Crow laws at the time, utter poverty, and like this song, suffering the loss of a woman, these bluesmen were living the phrase, ‘damned if I do, damned if I don’t.’  Ol’ Crying Sam would rather see his own coffin than to hear a woman tell them she didn’t want him anymore.  Whoa.

And that was it.  I pulled out the woodburning pen and burned “Damned if I do…” up the neck.   The essence of desperation blues. 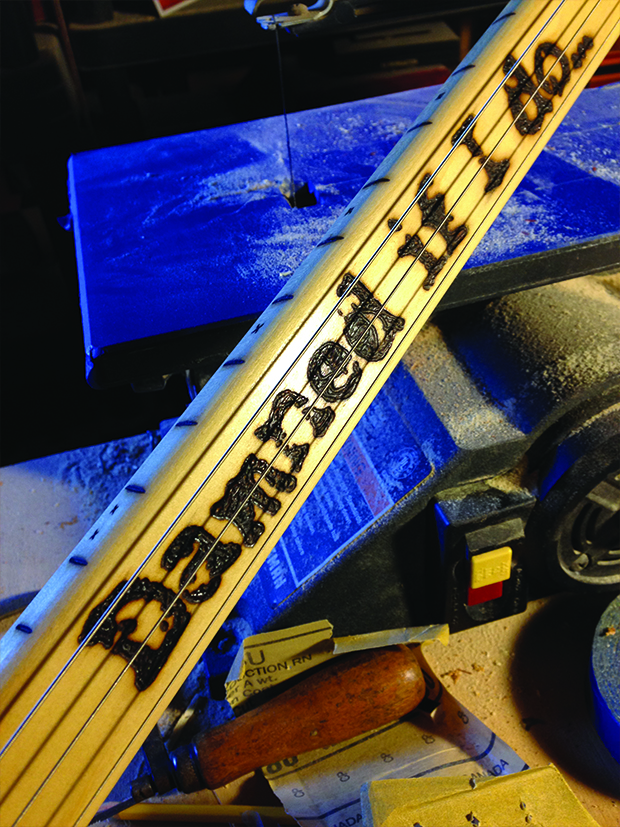 The neck got several coats of polyurethane, tuners were added and the instrument was assembled.  When I plugged it into the small Kustom practice amp in my shop, I got goosebumps.  The tone was a gumbo of metallic creaking, electric snarl and graveyard moan. 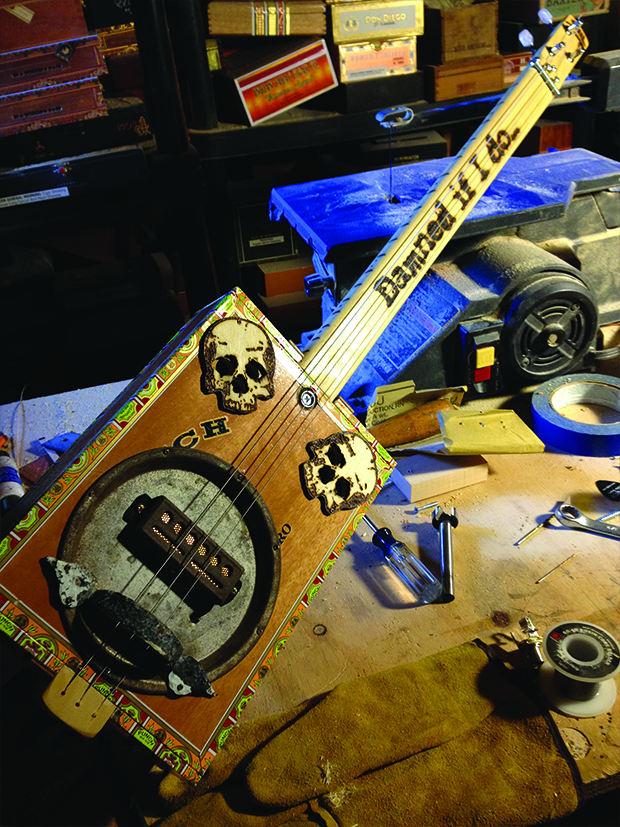 I never did get to make a demo video.  It sold the very next morning when I posted it on my website.

So instead of ending this woodshop diary with a video of the guitar, I’ll just leave you with Crying Sam Collins, Graveyard Digger’s Blues

THAT is the reason we build CBG's... I'm sure I speak for a great many people when I say ..Thank You for all you have done for this type of music!! I am 70 years old and just now,, with your help, learning to play some of the best blues music I have had the pleasure of hearing. Again Thank You

Man Shane.After seeing this guitar I went to my local Goodwill and found two small pans similar to yours.I can't wait to make one like this.Sure wish you would have made a video.Love it.

THIS was a good read and right up my alley.   Great looking guitar too.

Shane, I am still in the process of laying out my first resonator, and this git you built has me wondering.  I assumed I would put my mag pickup on the box lid (towards the nut of course) rather than on the tin itself to keep as much extra mass off of the tin as possible for a better acoustic reso sound.  Any thoughts on how important that is?

I cant help myself...as a rule.

Anyone ever made the 5-string mandolin that there are plans for here?

Tryin to stay in tune

Anyone in or near Fayetteville, NC area building CBG’s? other than me.

Dave passed away on Friday AM, 9/17/21. Thanks for all the well-wishers before and after his passing.

Started by Uncle John in Other stuff - off topic, fun stuff, whatever. Last reply by Anthony adams Oct 19. 63 Replies 14 Likes

Started at the peghead and working my way down...
36 minutes ago
0 Comments 0 Likes