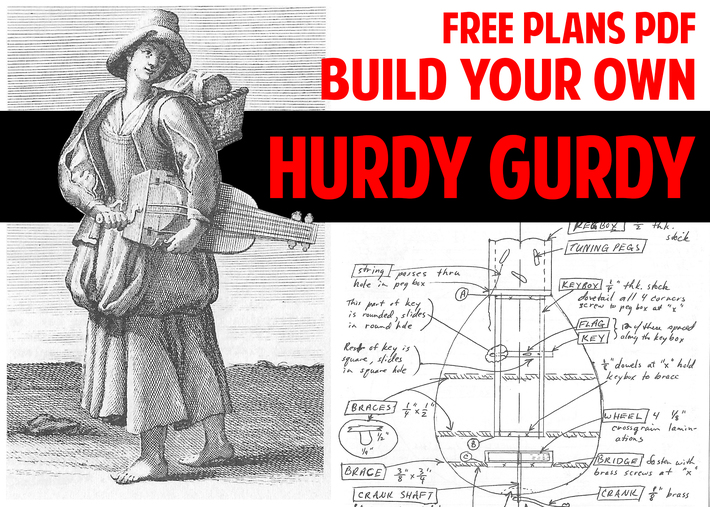 A note from Shane:  In researching various obscure musical instruments, I have discovered the treasure trove of information from Mugwumps, a now defunct magazine originally published by Michael Holmes of Silver Spring, MD.  The bi-monthly journal celebrated old time music, unusual folk instruments and served as a classifieds for the emerging bluegrass community of the 1970's.

These handwritten plans were found in the March 1974 issue.

CHALLENGE TO IMPROVE THESE PLANS:  If you have improvements to these plans, please post them in the comments below.  Also use the comments section to post any photos and descriptions of hurdy gurdy's ("gurdies?") that you've built.

Wikipedia describes the Hurdy Gurdy as "a stringed instrument that produces sound by a hand crank-turned, rosined wheel rubbing against the strings. The wheel functions much like a violin bow, and single notes played on the instrument sound similar to those of a violin. Melodies are played on a keyboard that presses tangents—small wedges, typically made of wood—against one or more of the strings to change their pitch.

From the original article:  This article will explain the basics of the construction of a Medieval type Hurdy-Gurdy, giving the essential measurements and procedures. It should be remembered that the Hurdy-Gurdy is not a hightly evolved instrument like the violin, for example, and therefore there is no one superior shape or form. In fact, even the important measurements of wheel diameter and string length which I have given, can be changed; these are just the particular ones I have found most satisfactory.

Mugwumps was one of the first publications to reprint old patents and present plans for instruments such as this improved gut bucket bass.  To my knowledge, all Mugwumps issues are completely out of print and not available in reprint.  I present these plans to you as an easy-to-download PDF.  Print them out and build away

Sorry to break it to you, but Will did not build that hurdy gurdy from the plans. A small operation here in Denver used to sell kits. Here is a photo of mine.

That is beautiful Peter! Any plans available anywhere for it?

didn't meant to imply Will's gurdy was from these plans.  I just wanted to have a video example of what a hurdy gurdy actually was.  :)

Quite true, my gurdy is an Altarwind built by George Leverett.  There is a very basic rudimentary kit from UGears that C. B. Gitty does sell--and it's an affordable version of what can be a very complicated and expensive instrument.  Check it out and once you build one of them, you might want to explore these plans here.  Not for beginners!

Unfortunately no plans, I don't even have the name of the little business that sold the kits. It was about 30-years ago and it closed down and disappeared long ago. He had kits for just about every stringed instrument you can think of, and they were reasonably priced. I wish they were still around.

Check out  "Nerdy Gurdy".  They have nice kits (laser cut).

Just had a quick look at that site Titch, think I just found a new project to do in between cbg builds !! Cheers!

Started by John B Treutlein in Performances, How to Play, Lessons, Concerts. Last reply by Carl Floyd 1 hour ago. 6 Replies 4 Likes

Carl Floyd replied to John B Treutlein's discussion New member with a new build nearly done
"I use the free version of Pitch Lab Pro on my android phone.  Even has a strobe option."
1 hour ago

"The Man In Black Approves. "
2 hours ago

"That is a nice Guitar. did Lace do the image on the Pickup ?"
2 hours ago

"Oh yeah,  Just right in maybe GDGB or DGBE.  Or others.  Beautiful chair and caning…"
4 hours ago

"Excellent!  Video and performance!~"
5 hours ago