One Hour Guitar Project:  Turn an Antique Set of Bellows Into a 3-String Screaming Slide Guitar 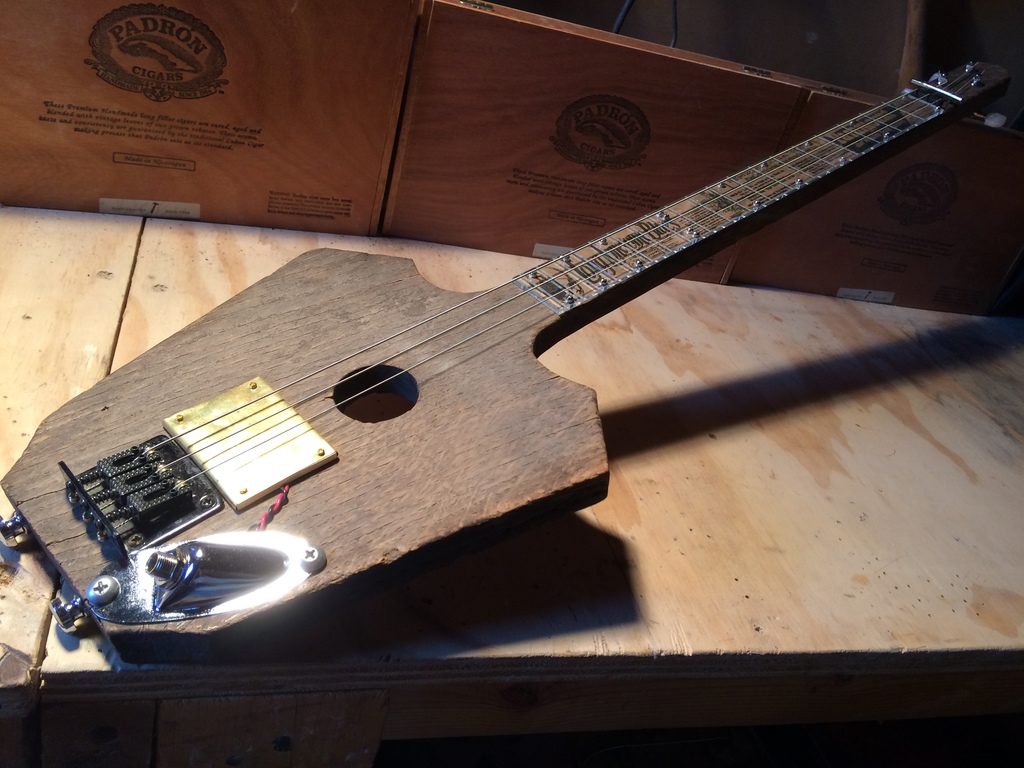 The story of this freak instrument started with a bad purchase I made on eBay.  The seller listed this strange wooden piece as the body of an Appalachian banjo from the 1800’s.  As a collector of antique DIY instruments, I couldn’t pass up the $30 “buy it now” listing.  Unfortunately after inspecting it in person, the piece turned out to be the handle & half the body of a set of bellows for stoking a fire. Instead of sending it back, I turned it into this insane rat rod “Electric Bellows” three string guitar.  It only took me an hour to build it.  The shape of the bellows had the appearance of a solidbody musical instrument.  I simply added tuners, a pickup, fretboard and bridge.

These are the parts I used: 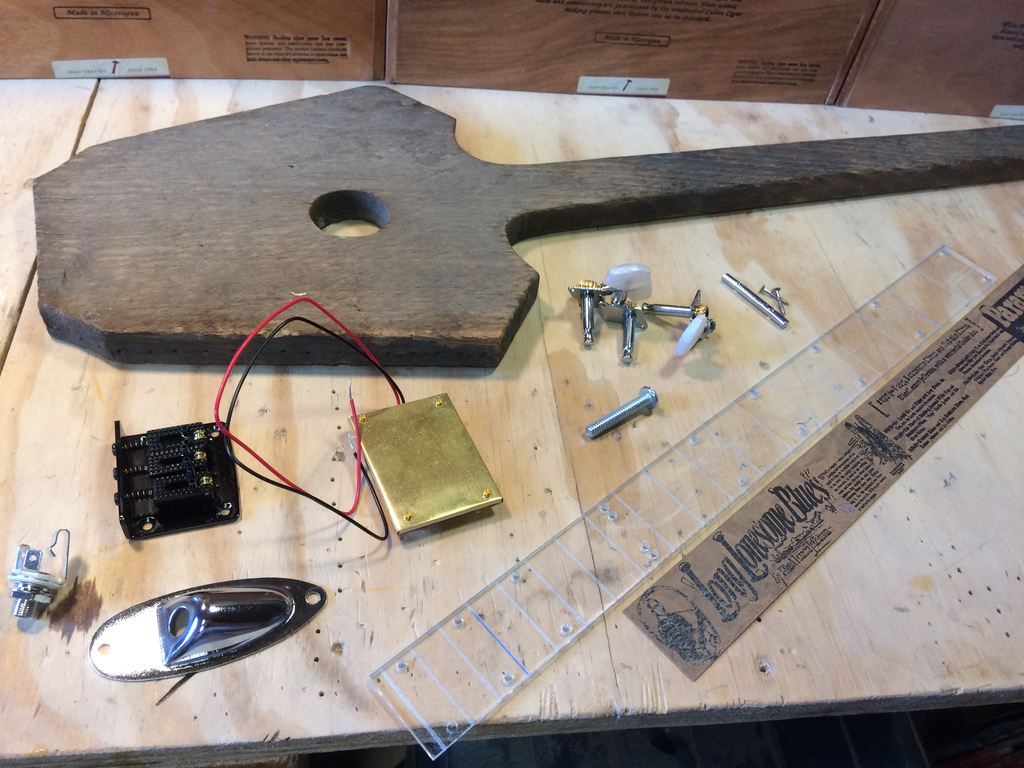 Because the antique bellows had a time-worn “neck,” there was zero sanding needed.  The only woodworking done to it was the three holes drilled for the tuners and a small amount of routing under the jack plate.  The hard tail bridge, Wickedbucker pickup and fretboard were all designed for top-mounting.  An electric screwdriver was all I needed to put them in. 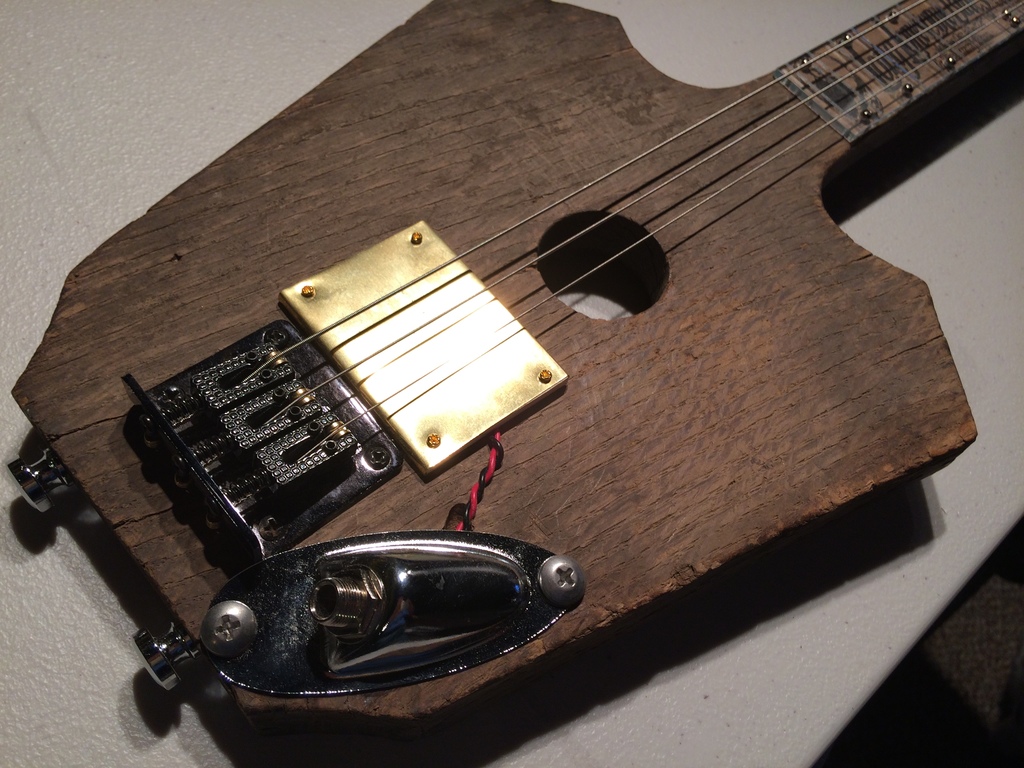 A simple yardstick was used to measure the 25” scale and line up the Hard Tail bridge with the neck.  All other parts were eyeballed in place and screwed down!  There was very little planning and almost zero preparation.  When you become a parts hoarder and have a huge stash of fun things to choose from, instruments like this just seem to jump into existence.

If you want to build an Electric Bellows, but don’t have an antique bellows laying around, you could cut out a similar shape on a plank of oak or poplar purchased at any big box hardware store.

For those who are asking the question, “why would you build this in the first place,” I simply say, why not!  You never know what songs you’ll find hiding within an instrument you’ve built yourself.

Musician and author, Shane Speal is responsible for the resurgence of cigar box guitars in modern music. He fronts the DIY-instrument band, Shane Speal and the Snakes, curates the Cigar Box Guitar Museum inside Speal’s Tavern in New Alexandria, PA, and has made 2,000 cigar box guitars to date. His latest book, Making a Poor Man's Guitar (Fox Chapel Publishing, August 2018) combines DIY instrument projects with their deep blues history.

"thanks, it is dave's music....I mastered the track and cleaned it up with chorus and reverb…"
17 minutes ago

"You guys are my fave right do-et.  That twanger sounds great."
7 hours ago

"By the way, listen with headphones if you can. There's a lot more going on there then…"
9 hours ago

"Thanks guys!And yeah Poorness, I'm hipper than I look. lol"
9 hours ago

"I can always tell you are having a good time putting them together! "
11 hours ago

"Another delightful musical skit Kale! Creative and entertaining. You have a fertile imagination."
11 hours ago