This is my first attempt at a cigar box fiddle, I have never played a violin or the fiddle, but I wanted to build one.

I had it in an all wood box, but it was too wide, so I switched it to this box I picked up at the local smoke shop.

I loosely followed the 1940's plans, but I thought a broomstick for a neck, I can do better then that...which led to other issues. The Ukelele tuners wouldn't fit thru my neck like on the plans, so I made a make shift peg box.

I didn't have a 1 inch drop from the top of the box to the neck, so I made a make shift fingerboard  lifter...a piece of wood and a dowel. LOL

I had the tail piece at the back of the box, but I bought a couple sets of strings from ebay for $2.49 a set, and the G string wouldn't reach the tuners...it was too short.  So I moved the tail piece forward, and still wound up breaking the G string from both sets of my strings.

The 3 remaining strings are tuned currently at C#, F#, D#...almost to D, A, E but I feel if I keep tightening them, they are going to break.

Anyway, here are some pics and a youtube video....I don't know how to play, but you can hear it makes noise. LOL

Oh, I had a bridge I bought on Ebay for $2.99 and I broke that...I was focused on reaching pich and not watching the bridge, so it snapped in half and I had to make a new one.

The pics are of the fiddle and the inside of the box, I did try to do a bass bar and sound post, not sure if they affect it at all, but they are in there. :-)

Permalink Reply by Wade on October 1, 2011 at 10:11pm
Great little fiddle. It looks like you are having a blast building and playing- that's what it's all about!

Thanks Wade. There was a lot of frustration on the fiddle build, but I think I about got it.  The Start-right strings I ordered came today along with my actual tailpiece and tail gut...I was actually able to tune it, its fallen a little out now, but Im thinking I am gonna let everything settle in a bit and let the strings stretch and maybe re tune it in the morning. So far, these strings are way better then the cheap made in japan strings I was buying on ebay for $2.49. LOL You get what you pay for, thats a fact.

Its a little difficult to play the G string due to box size, but it works for now. I feel it would be a hassle and half to try and shave some of the box...I probably should, but don't wanna deal with it yet. :-)

The nice thing about having the real tailpiece, I have fine tuners...LOL they seem to work nicely.

Permalink Reply by Yellowbelly Flatt on October 2, 2011 at 2:10am
I am very pleased that a reasonable set of strings seems to have cured your tuning problems. It's also so much easier with a good set of fine tuners as you have pointed out.  Great work.

Thanks, here is an updated image of it with the new tailpiece and nylon tail gut, with the tailpiece now the box is almost too short, not much room between the tailpiece and the bridge.  Oh and still using the bridge I made, I should probably get a real bridge someday, I broke the one I had and made that one out of a piece of fretboard I had left from my 3 string CBG. :-) It works, but its all solid, there is no feet on it. 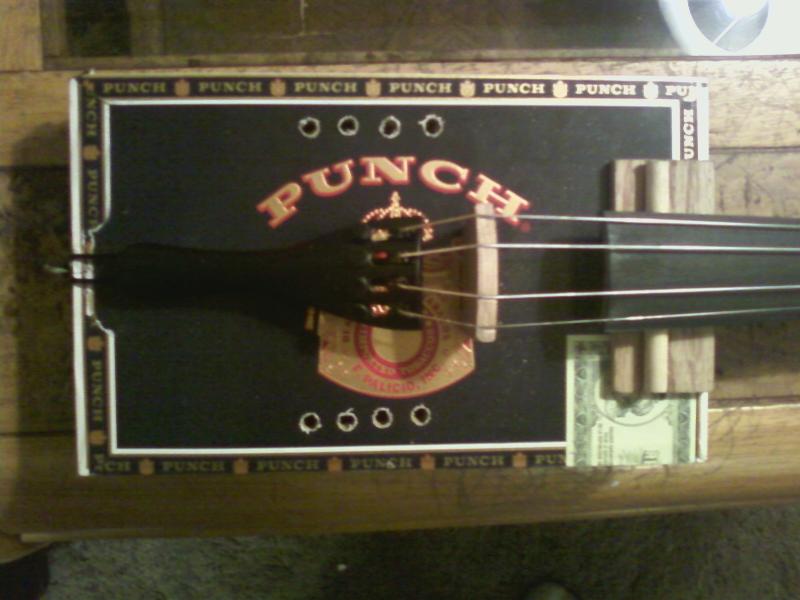 I post the measurements of the box and the neck in about an hour when I get home and measure it.

I kind of winged it based on the size of my finger board, and because I made the peg box.

I think the plans say start with 23 inches for the neck, I did that, but then I know I cut some off a few times. The plans say the bridge should be 12-13 inches from the nut, so depending on where your nut is, its a matter of where you want the bridge to be on the box, and how much playing area you want. I bought my finger board online, and its a hair over 10 inches long, so I kind of just did it based on trying to get the bridge in the center of the box

But then when I added the actual tailpiece, that kind of forced me to move it forward some anyway.

Sorry for the rambling on, I will post the numbers here in a bit when I get home. :-)

from where the finger board ends at the nut to where the neck exits the box the box is about 9 inches.

From nut to bridge right around 13

Total length of whole instrument is 22 5/8

Probably gave you more numbers then you needed, but thought I would cover everything. :-)

I just joined and found your project. I like it and it's probably close to what I'll end up getting into. I have experience cutting and fitting violin/fiddle bridges so I wonder why your bridge is so fat?.

Logic makes you think the more mass you on a bridge, the lower the sound you'll get, but it doesn't work that way. The less wood on your bridge, the more sound vibrations travel down the bridge and into the body or in this case box.

You can make some easy adjustments with a dremel tool or even a grinding wheel that with improve your intrument's sound. If you're interested, send me a message and I'll explain further. Again, very nice job!

Also, one of the reasons you may be breaking strings  (and this should be done for all string insruments plucked or bowed)  is not putting graffite in the slots on both the nut and bridge. This is why people come to me with nearly new fiddles with bridges that snapped. Once the tension builds, the downward force makes the string stick. You adjust a string and the tone doesn't change and then all of a sudden it's sharp, that's why. Anytime you change a string on anything take the sharpest pencil you have and load up both slots without enlarging the slot on the bridge,

Hi Bruce, you are correct, I did wind up making the bridge a little thinner, that was my first attempt at making my own bridge, I have another friend that is a fiddle player and he pointed out the same thing. It is actually thinner now, and I actually drilled several holes in as well just to make it less mass.

And yes, he also mentioned the pencil trick...that does work well.

I have since, bought a real violin/fiddle, just a cheap one off ebay, and its funny, other then not being as loud, I prefer the sound of the one I built to the one I bought. LOL

I think the one I built would be louder, but I did not understand correct placement of the sound post and bass bar at the time, so it does lack volume, but its fun to play if you just want a quiet instrument to practice on.  If I ever open it up for any reason (box is glues shut at the moment), I may try and re position my bass bar and sound post.

I should have asked first. Of course you tweeked it after building it. I wasn't trying to be a "Know It All", just trying to help if I could.

It really is a cool project and I'm sure you're proud of it(as you should be)! That's gotta help the sound a bit too  :o)

LOL, its fine, I didn't think you were trying to be a know it all....I welcome all tips and advice.  They are very cool projects, at the moment, I am running out of room for projects and instruments...I have the Cigar Box violin, I have two 3 string cigar box guitars that I built, one 6 string, and a 4 string electric that I bought. Then I turned around and bought a acoustic guitar off musicians friend that came with a free mandolin, and then I just bought a cheap little Ukulele.

LOL, I am hooked on musical instruments, but I am quickly running out of room for them all. LOL I am kind of itching to build something else, but I am reluctant because I have no room for anything else.

I appreciate your comments, and would love to see your project when you get it finished, I like seeing what everyone else does, and how they turn out. Cigar Box projects are an addiction...LOL

Have a great day.

Engblom replied to Engblom's discussion Getting intonation right
"Thank you! This sounds like a good way to do it!"
1 hour ago

Taffy Evans replied to Engblom's discussion Getting intonation right
"Hi, I’m on holidays at the moment so I cannot show you pictures from my computer. So I hope…"
2 hours ago

CBGers are a handy bunch.

If you build a CBG without a tailpiece and with the strings attached to the saddle, how do you get…See More
5 hours ago
2 Comments 0 Likes

Doug Laffin replied to Muddytone's discussion What random stuff have you used for a bridge?
"I'm using a lamb shank bone on my current build."
6 hours ago

"You are one dedicated busker Belinda! It’s always a treat to watch you artfully work your…"
8 hours ago

BrianQ. replied to Engblom's discussion Anyone with experience in 1-3-1 tuning?
"Those chord shapes & can be used for any 1-5-8 tuning, gitty did some charts back years ago…"
10 hours ago