While doing a search on Blind Willie Johnson, I found this: 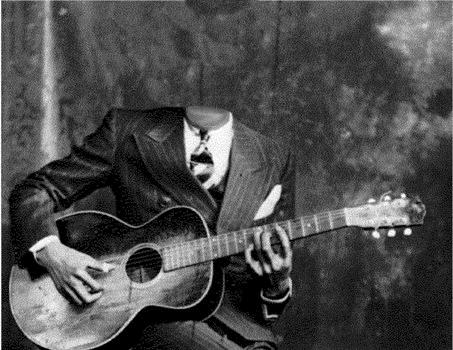 Any blues aficionado knows the legendary names of “Blind Boy” Fuller and “Blind”Willie Johnson. But even hard-core blues fans know little, if anything, about bluesmen like “Terribly Nearsighted” Lewis… or “Can’t Read Much Small Print At All” McCoy… or “Having Awful Problems Seeing At Night” Mason… or “Trouble Judging Distances”Jenkins.

Unfortunately, these great players are but footnotes in the history of the blues. Many claim this was not for lack of talent, but rather lack of deformity. I spoke recently with noted optometrist/ blues historian Dr. Randall Gurr about this.

“Basically,” Dr. Gurr told me seated in a leather chair while petting his pet cat Fluffy-Muffy-Woo-Woo, “these men did not receive the attention they deserved because their eyesight was merely poor rather than nonexistent.” Dr. Gurr shifted his weight in the chair as his loving pet took an angry swipe of her claw at his face. The good doctor dabbed the flow of blood trickling from his cheek with a handkerchief and continued speaking like a poor ventriloquist, his lips flapping in salutes to the words coming out of his mouth.

“Had ‘Terribly Nearsighted’ Lewis been blessed with blindness, he could have called himself ‘Blindman’ Lewis and probably have given ‘Blind Boy’ Fuller a run for his money. But, being nearsighted just didn’t have the appeal to blues listeners that blindness does,” the Doctor sighed as Fluffy-Muffy-Woo-Woo dug her sharp teeth into his beefy forearm. The medic flung his beloved cat across the room into a display of Hummel figurines and quickly ripped a sleeve from his shirt and fashioned it into a makeshift tourniquet on his bleeding limb.

“Blindness pretty much assured great success for blues players. Everyone wanted to see a blind player play.” The doctor turned his attention to his cat. “Here kitty, come to papa,” the Doctor cooed as his pet viciously pounced onto his head, digging her razor-sharp claws firmly into his scalp. Wearing Fluffy-Muffy-Woo-Woo like a coonskin cap, the learned man spun about trying to shake her off. He tripped over an ottoman and hit the floor hard. The cat disengaged her claws and quickly scampered into the kitchen. Dr. Gurr cursed under his breath and slowly rose. He grabbed a doily off the chair, placed it atop his head to sop-up the oozing blood and sat down. He continued with his discourse.

“Although blindness was a very popular deformity, there were other ways a blues musician could get some recognition. These players include the likes of ‘Pegleg’ Harless,‘Two Fingered’ Pete Wilson, ‘Big Ol’ Beer Gut’ Kincaid, ‘Three Eyed’ Bessie Randall, ‘Ruptured Spleen’ Thompson, ‘Splitting Migraines’ Bubjoy, ‘Abscessed Teeth’ Stinky Popler, ‘Nose Busted In About Sixteen Places’ Charlie Rothroad, ‘Itchy Rash Over Damn Near My Whole Body’ Fletcher, ‘Ingrown Toenails’ Todd Lohrenz, ‘Rusty Spike Driven Into My Left Kneecap’ Carlson, ‘Crotchrot’ McGuintry, ‘Ears Oozing Pus’ McClintock and ‘No Lips To Speak Of’ Dundee. Each of these people contributed a swatch of fabric into the grand tapestry of blues history. Curiously, few of them could sew,” the good doctor said softly. He noticed his cat coming in from the kitchen with a steak knife in its mouth. He smiled lovingly and spoke again.

“Perhaps the most amazing blues legend of all was “Headless” Lou Kolirew, who in l934 recorded the classic blues standard “Don’t Tell Me You’re Leavin’ ‘Cause I Don’t Have A Head To Hear You With… And By The Way, Are Those New Shoes You’re Wearing, Or What?” It was a very popular song that— owwwww!!!” the man wailed as he looked down and saw a steak knife planted into his calf.

His cat meowed softly, dropped the knife and hacked-up a hairball. I slowly moved to the door and ran quickly from the house. Later it struck me that some people really do have the right to sing the blues and maybe some people just are aren’t cat people.

Started by the anonymous pick in Other stuff - off topic, fun stuff, whatever. Last reply by Ron "Oily" Sprague 16 hours ago. 9 Replies 7 Likes

"Fun and simple project Kale! I enjoyed watching you pull it all together in a short yet detailed…"
2 hours ago

"Great video, great simple build that sounds great! That`s got to inspire anyone who sees and hears…"
5 hours ago

"That was brilliant!"
5 hours ago

"Great job! You made a song I never liked one that I`m digging out the chords to play!"
5 hours ago

Taffy Evans replied to Infirmity Citrus President's discussion Your take on this bizarre guitar
"Hi again, just a bit more info about the Balalaika. They are commercially available in different…"
5 hours ago

""Thanks Doug", I love the Gas Torch, it's one of my favourite tools, will try and…"
6 hours ago