I was going through some of the posts over at cigarboxguitar.com looking at the historical articles and pictures and it seemed to me that most of the old instruments are either diddleys, or they're homebuilt versions of traditional instruments like ukes, banjos and violins.  Are there any period examples of 3 stringed guitars out there?

I know there are plenty of 3 string instruments from around the world, but as far as American roots instruments are concerned the only thing I could think that would compare is the Appalachian dulcimer with its 3 strings and 151 tuning.  Maybe they are cousins, but especially as it relates to the blues and how we generally approach these things today, I'm beginning to think 3 stringers might be a more modern idea than I thought.

Are there any historians out there that could shed some light?

OK Let's blame it all on Shane! Maybe he can shed some light on where his 3 string idea came from.

I just went back through Bill's book as thoroughly as I could in the hour or so available. There are several mentions of 2 string CBG instruments and many mentions of 1 string but I was unable to find a single mention of 3 stringers! Hopefully Shane will be able to add some knowledge to this bit of history.

Thanks for looking Jim, this is blowing my mind!

i think one must take into consideration  the  timing of  the cigar box era  .  not too many  folks  in the US  had a youtube ready  video recorder on them at all times ,  neve-rmind a standard  camera  during the depression era . not to mention the juke joints and watering holes they appeared  in were not so  "news worthy"  at the time   . the  cigar box  thing was  short  lived  and  non event-full on the  world stage .  hence we  have to  rely  mostly  on the  word of mouth of the old guys that  were there ,  the  old blues men  themselves  , joint owners  , barber shop folk  , and those that lived it  .  and    rare  chances of  a company   recognizing  it  through  research and /or  hearing such  stories even seeing copies of their models  etc...  first hand  . then  take into account where the US version came from ,  i  believe  it  has   a heavy  African influence . and  you  may have the ingredients for the original recipe.

which may result in more, (although rare)  documented evidence.

Very cool info and photos pick. Yeah, I have to believe the 3 string box goes back much farther than we can trace and the African connection makes perfect sense to me since there are African gourd instruments with 3 strings and it would have been a natural thing for that to transfer to whatever box was available back then.

The 3 string Akonting from Africa could well have been the ancestor of both our 5 string banjo and our 3 string CBG! The traditional Akonting tunings don't really correspond to banjo or CBG tunings commonly used but hey, many of us tune an instrument to suit a particular song with little regard for "standard" tuning. 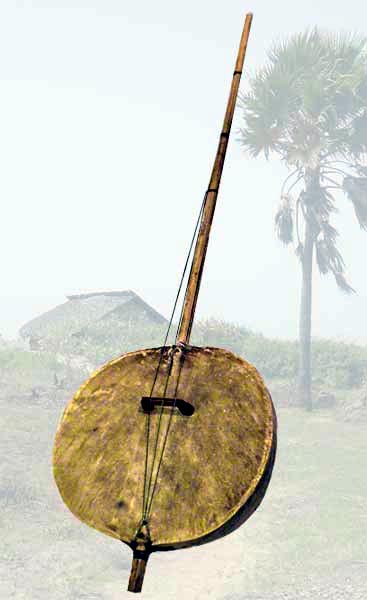 Actually, according to the US Army, that's a photo of Private Jake Reynolds (who's playing a 6-string neck stuck into a can, I think) taken January 1,1944, in the Solomon Islands in the South Pacific... but why let facts get in the way of a good story. ;)) 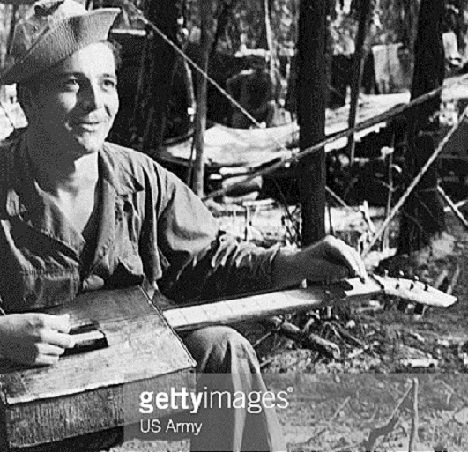 Looks like i  stand corrected on that last picture  . indeed  it looks  like a  6er  when  blown up and clear  .

Well now that's a bit of history I was unaware of. Vasco  played horn? I always thought he played 6 string viola de gamba.

Saxophone (tenor), actually.  I don't know if he was another Sonny Rollins or not, but I heard he tore the place up pretty good one night during a Stones' concert, while sitting in for Bobby Keys.

I'm pretty sure turtlehead didn't expect his serious inquiry to go all crazy like this. But that's what happens sometimes with CBN types. Besides, I know for a fact that Albert Einstein didn't invent the Saxophone until about 1840 so I'm sticking with viola de gamba!

If I've learned anything from hanging around here, it's that we're all a little crazy ;)

Started by John B Treutlein in Performances, How to Play, Lessons, Concerts. Last reply by Taffy Evans 14 hours ago. 4 Replies 4 Likes

John B Treutlein replied to John B Treutlein's discussion String grounding
"I believe in this process I read of a player in ,ithink the Eagles,died under rather,uh extreme…"
14 hours ago

Taffy Evans replied to John B Treutlein's discussion New member with a new build nearly done
"Haha, I had every faith in you. Taff"
14 hours ago

"Wow! Cool instrument to restore Alan. It’s  a tuning extravaganza, certainly not for the…"
15 hours ago

"Oh yeah! Sweet CBG T-Gripped. A fine vintage box and a build worthy of it."
15 hours ago

"Thanks Kale! I see you are handling the 7ths and minor chords the same way I am."
15 hours ago

"Thanks Kale and Uncle John! I do like the variety of songs that the Slingers choose. It definitely…"
15 hours ago

Trying to mix metal and wood on a reso - ran thru a budget Mustang Amp- from the webpage https://www.reddogguitars.com There is CBGs for sale and more cig...
15 hours ago
0 Comments 0 Likes

This is an original song as a tribute to Johnny Cash who we adore and respect! We love the reason he wore black, in fact, “He wrote the song ‘Man in Black’ t...
16 hours ago
1 Comment 0 Likes

Taffy Evans replied to John B Treutlein's discussion String grounding
"Hi, with respect to Brian's comment "it's good practice", my thought is to not…"
16 hours ago