Searching for Eddie "One String" Jones - MUSIC AND PICS 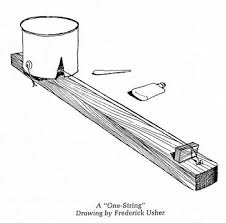 A sketch of Eddie "One String" Jones instrument.  A 2x4, broom wire, medicine bottle for a bridge (covered by a paint can, which Jones called his "broadcaster").  Played with a bottle slide and a stick.

Song #1: Eddie "One String" Jones' version of Rolling & Tumbling along with a story of his mother burning his diddley bow: Eddie "One String" Jones was, by no stretch of the imagination, a professional musician. Had it not been for his chance discovery by folklorist and ethnic musicologist Frederick A. Usher in February of 1960, it's a pretty safe bet that no recorded document of him would probably exist.

Usher was in Los Angeles' Skid Row section on business with an associate when he was accosted by two panhandlers. One of those two men (Jones) was holding a rough cut 2'x4' plank, a homemade one-stringed instrument of the crudest construction. After a bit of cajoling from Usher, Jones reached into his pocket and fished out the other two working tools he used to make music with the board, a half-pint whiskey bottle to slide with and a carefully whittled stick to bang the single string with in place of a guitar pick.

The sound was raw, jangly, and chaotic, as far removed from normal slide or bottleneck techniques as Usher (or anyone else) had ever heard. This was evidently a direct tie to the African instrument known as the "diddleybow," but Jones' technique with the stick gave the music an otherworldly edge, multiple tones to be derived from a single note, and a total departure from what most folklorists had previously known about the instrument. Sensing that Jones was a modern-day link to an African art form long since dissipated, Usher was bowled over and ran back home as fast as he could to grab his portable tape recorder. 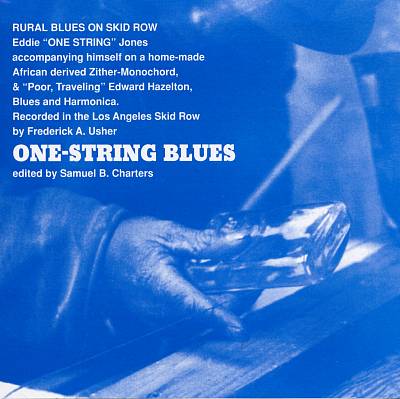 After hooking up to a nearby store's electricity in a deserted back alley, Usher made the first recordings of Eddie "One String" Jones.

But Jones's lifestyle as a homeless person made all attempts by Usher to mainstream him into folk music circles a virtual impossibility. "One String" was most secretive about his technique, the origin of the instrument, even his given name, which -- it turns out -- could have been Eddie Jones or Jessie Marshall.

After scheduling two more informal recording sessions (one of which he appears to be a no-show) and a chance to play for a group of Usher's friends in Hollywood, Jones slipped back into obscurity and has eluded all modern-day blues detective work to even try and append his bio with a date of his death.

If there's a romantic, mystery figure in blues history, Eddie "One String" Jones would certainly be at the top of the list.

-from Cub Koda's bio of Eddie "One String" Jones (from Allmusic):

Thanks Ben...I don't know how you find this stuff but please keep it coming.  Wow -  that was primal.

Permalink Reply by Jonathan Hall on January 18, 2016 at 4:03pm
Ben this is actually my first post. Found this in a convoluted way on the forum. Thank you this is precious to me. This music is the essence and root of where blues came from. So glad Usher was able to capture his vibrations before he was lost. I will now have to seek the record out.

By the way I am in the midst of my first build and utilized your store. I purchased your Merc dime bridge and must say it is gorgeous.

I suppose in the photo to "Baby Please Don't Go" there is One String Sam who recorded two songs in 1956 and two in 1973, "I Need a Hundred Dollars" twice.

Mr. Speal gets the credit for this research, I only reposted it for him!

I really like this! Music does come from everywhere.

Does anyone know what size/kind of medicine bottle was used under the can? I assume he was using the can with its "V" shaped cutout as a sort of resonator.

Need to build one of these next month! I've got a pair of maple drum sticks I will cut down and shape for use as hammers. Red oak dowelling isn't hard enough-I tried that on my "Brown Betty" DB and the string dented the wood. Does 30 inches sound about right for the board length?

On my build (see my diddley bow group post) I went with a 1/4 threaded rod on top of a 1 3/4" high by 2 3/4" wide wood block for the bridge since I couldn't find a good, inexpensive, bottle to use. There were some possible bottles at the antique mall but I wasn't going to pay $10+ for one. Thickness of the glass is a big issue here, both for tone and durability.

As for board length, I went with 32". That worked well with a Home Depot quart paint can and a 23" scale length. I could have cut it down another 2 inches, but I like to have space to work with. If you went with the gallon can, you would need another 4 inches or so in length. (If you want louder "annoy your wife" level acoustic volume, go with the gallon can.)

For the striker stick, I used a 9" piece of 3/8" dowel from Hobby Lobby (poplar, I think). It seems to do well but maple would hold up better.

As for a slide, I like the sound I get from the bottleneck from a thick wine bottle the best. Metal slides combined with the metal can can get a bit harsh sounding.

Daniel, those old one string players all used broom/bailing wire, which is pretty thick? I have built some good sounding paint can diddlies using piano wire, it was somewhere around .050, maybe bigger & yielded a better performance since it didn’t stretch like bailing wire often does? Sometimes you can find a good thick piano wire where they sell pottery supplies, since it’s commonly used to cut clay?

"Appropriate Song also for me in the Land Down Under James O, just had a week of rain down here,…"
46 minutes ago

""Thanks Ron", the solid body gits are well worth having a go at, have done quite a few…"
3 hours ago

""Thanks A.D.", No 78 Records were harmed in the construction of this build, purchased…"
4 hours ago

""Thanks Doug", have used my Pyromaniac Expertise on a few builds over the years. ;-D"
4 hours ago

"That is a very nice build, I have never done a solid body. May have to give it a go."
4 hours ago