I'm an electronics idiot.  There, I said it!  I suck when it comes to soldering and breadboards and all that crap.  I couldn't wire my way out of a paper bag, if the truth be told.

...But then C. B. Gitty came out with a pre-wired cigar box amp kit and I just had to dive in and try one out.  And then another and another.

The Gitty amp kit a simple 2.5 watt amp that delivers living room volume in a tiny package.  Most of their pictures show a standard cigar box with a hole cut in the middle and a speaker with some sort of grill or cover.

I figured if I was going to build cigar box amps, I might as well use as much found-object stuff on them to make them look otherworldly, just like some of my best cigar box guitars.  Here's three examples that used the standard Gitty kit and the parts I used to mod them: 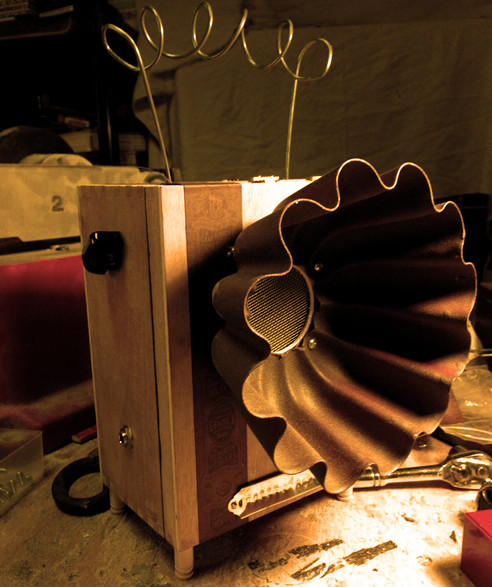 This amp started with an all wood Undercrown cigar box. I went for a 1950's Ed Wood sci-fi movie look by using the following parts: 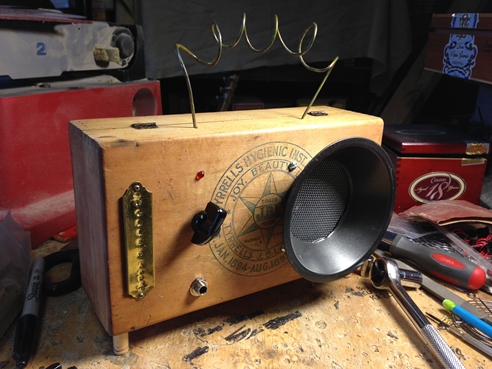 This amp started with an old hygenic instrument tool kit box.  I mounded everything sideways to give it a unique look, similar to a 1950's console radio.  I made sure the printed front of the box became the front of the amp. 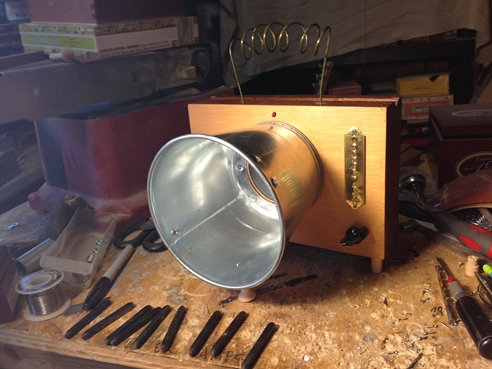 Oh wow, I can't remember which type of box this was, but the top of it had a curved archtop.  I used the curve for the back of the amp (hoping for it to push sound outward).  Same as above except:

Some thoughts on all these:

Although the 2.5 watt kits only put out home practice volume levels, they still sound great.  In comparing these three amps, I've discovered that the bucket speaker horn actually does increase the volume just a bit.

Cigar box amps can be just as much of an art statement as a cigar box guitar.  Have fun with them and get funky with the mods.  Got some ideas?  Post them in the comments below! 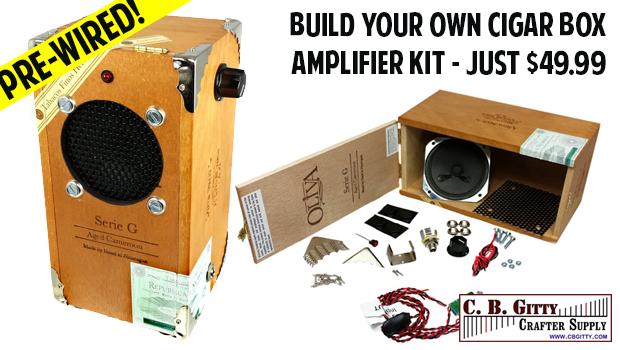 A good idea to add the cone to the speaker, acts like a megaphone and makes a little speaker sound a little bit bigger and louder. I think I liked the last one the best, looks like one of those Logan's galvanized buckets.

Another mod idea is to slightly open the box lid or drill a hole in the back to take out some bass if you like a lot of treble.

The "antenna" is a cool touch. Maybe make one with 2 TV rabbit ears next. LOL

Very cool, Shane!  Thinking outside the box, again!  I may have to liberate some of these ideas!

I have used a PA horn speaker externally mounted to very good effect.  This is good for smaller boxes when you need room for the circuitry.   Has a bluesy, old time sound with more than adequate volume and range. Sorry,  I don't have any available to record.

this is just so cool . you can almost hear it in the picture . awesome job!

Great job Shane and thanks for sharing your ideas!

Permalink Reply by Lou LaManna on March 3, 2017 at 10:24pm
I have boxes and ideas, can't wait to try to build some
I've done some old radios and cassette players that turned out awesome!

you can get these used for$20 or new$35. make any amp a better amp. gives you tone control ,power and gain. Infirmity Citrus President replied to Taffy Evans's discussion Working on the edge.
"My experience with knife sharpening advice: Every American male is born knowing how to sharpen a…"
8 hours ago

If a guy wanted to build a dog bowl resonator:Will a thick box produce a better tone than a thin…See More
8 hours ago
0 Comments 0 Likes

"Thanks Keith ! Appriciated !"
9 hours ago

"Yup BrianQ the simplisety from a board or plank, a wire ,and a tension construction to tune…"
9 hours ago

"is that his real name? BrianQ ,you got a picture to go whit that?"
9 hours ago

"thanks Poorness , the maiden recording of the rezzo i use tomuch effects to realy make the rezzo…"
10 hours ago

"Thanks Uncle J !  for your kind comments !  it does does it not ! specialy the stereo…"
10 hours ago

Gathering parts for the next reso

"The video is viewable! Glen was going to town on his slide!!! I ask about the unplugged properties…"
11 hours ago