Build The BATFINK Cigar Box Cello - Our most insane DIY instrument plans ever! A note from Shane: When I received these plans from Ward Shrake several weeks ago, I had to double check my blood alcohol levels to make sure I wasn't imagining things.  Sure enough, I was 100% sober...and I was gazing at a full set of instrument plans based on an obscure episode of the Batfink cartoon from 1966!

I think these are the wildest set of plans we've ever published!  I dare one of you to build this.

IMPROVE THESE PLANS?:  If you improve these plans, post them in the comments below.  Also post your finished photos!!!

But first, I present the original cartoon featuring the diabolical Professor Vibrato and his cigar box cello weapon:

Hey, I'm wondering if maybe you would want to post this stuff I'm sending, onto the "tech article" section, over at Cigar Box Nation?

[I used] screen-grabs from a 1966 TV show and some fan-made measurements to go along with it. 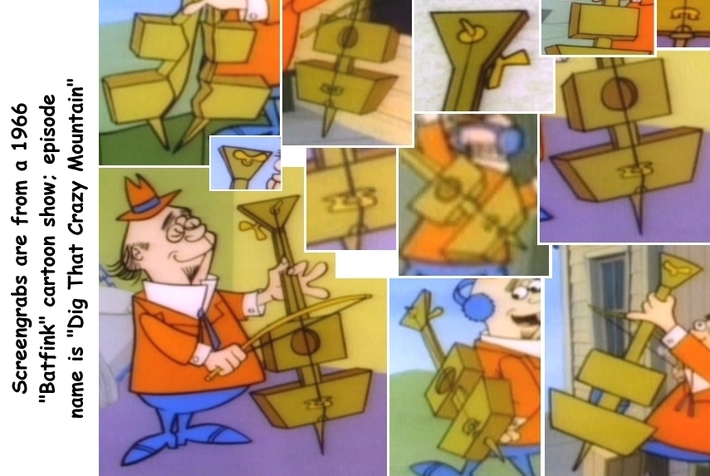 Even though the TV show only shows one size, I'm including measurements here for two sizes. What I'm calling the "full scale" version (on the sheet of figures) was gonna be way too big to be much like most other real-life "cigar box guitars," in terms of size and shape, so just for kicks, I drew up another at approx half of that "toon" size.That "half scale" version was, to my eyes, a bit too small in "real life". I did some math and (some occasional rounding-off) and to me, a "five-eighth's scale" version looked pretty close in size to what most CBG-building folks would be used to.

Hopefully, you'll get a kick out of this silliness! 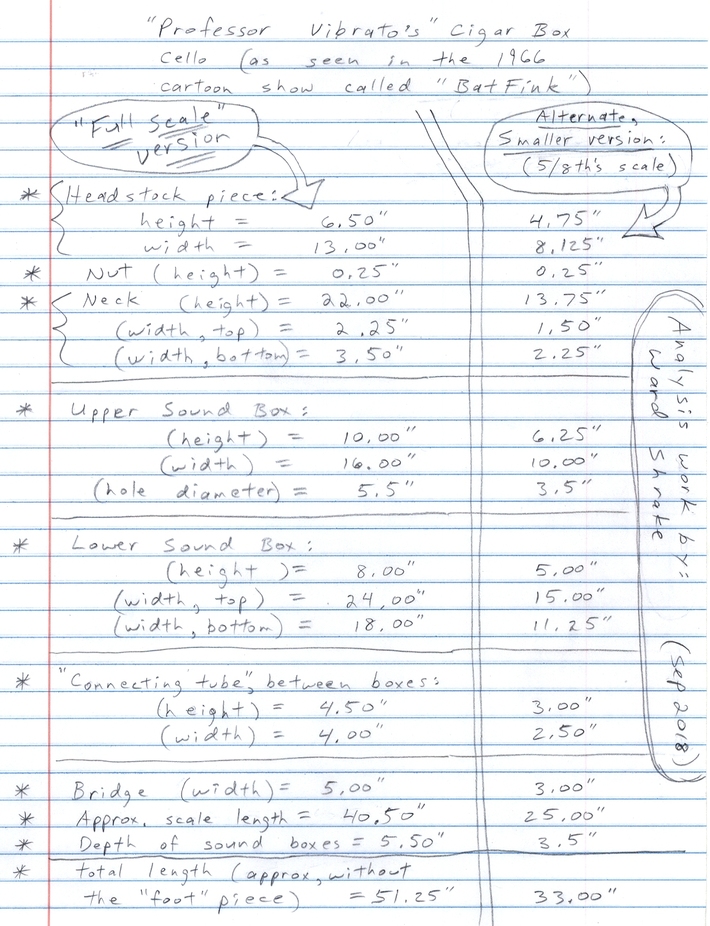 Looking at the total measurements I believe that the professor was quite short ;-) I so miss those... it seems the world was better just knowing that every Saturday the airwaves were saturated with some hand drawn animation goodness... and a coyote that never learns...

I was a 70s child, not old enough for Batfink, but... I remember those Saturday morning cartoons, in particular Schoolhouse Rock! with episodes like "Conjunction Junction" and "I'm Just a Bill". Those would be really fun songs to play.

I would want to electrify the cello, though. I mean, it's too close in size to a violin! A bass pickup might give it a cello sound, at least.

I'm really struggling to fully understand the plans. Having watched the very informative video, I think I'm OK with the woodwork, but I can't seem to find the vibrato gizmo on the CB Gitty site. I thought it would be in the same category as the Psycho Knob. Can anyone help?

I just did a stupid google search for the average height of an American man in the 1960's.

So I was right, according to the instrument's size in the plan, the professor was short :-)

So, if you want to do the build, the foot piece needs to be 17 inches long in order for the cello to be the proper size...

But I haven't calculated the size of the drawing, I just deduced that.

"You guys are my fave right do-et.  That twanger sounds great."
6 hours ago

"By the way, listen with headphones if you can. There's a lot more going on there then…"
9 hours ago

"Thanks guys!And yeah Poorness, I'm hipper than I look. lol"
9 hours ago

"I can always tell you are having a good time putting them together! "
11 hours ago

"Another delightful musical skit Kale! Creative and entertaining. You have a fertile imagination."
11 hours ago

"Thanks for watching AGP and Uncle John! I think this song goes back to college days when I was…"
13 hours ago