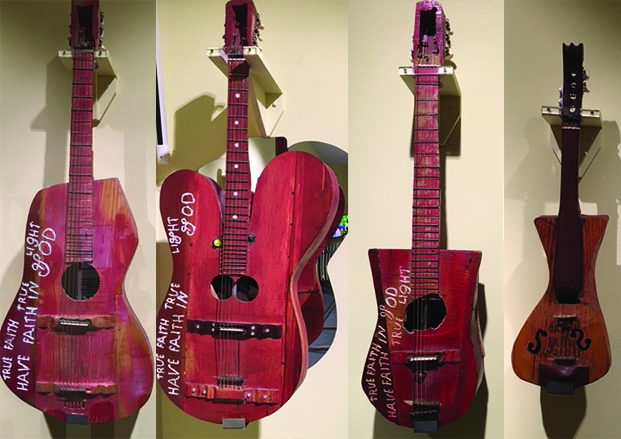 Report and photos by Bill Jagitsch, aka Bluesboy Jag.  Learn more about Jag at: http://www.jagshouse.com/cigarboxguitars.html

The photos in this article showcase the current exhibit of Ed Stilley instruments at Old Statehouse Museum .... There are 28 instruments in the exhibit as well as other Stilley artifacts.

Guest curators of the exhibit are Kelly and Donna Mulhollan, musicians and educators from Fayetteville, Arkansas who perform as the folk duo Still on the Hill. The Mulhollans have known Ed Stilley for nearly twenty years. Kelly is the author of True Faith, True Light: The Devotional Art of Ed Stilley, recently published by the University of Arkansas Press. 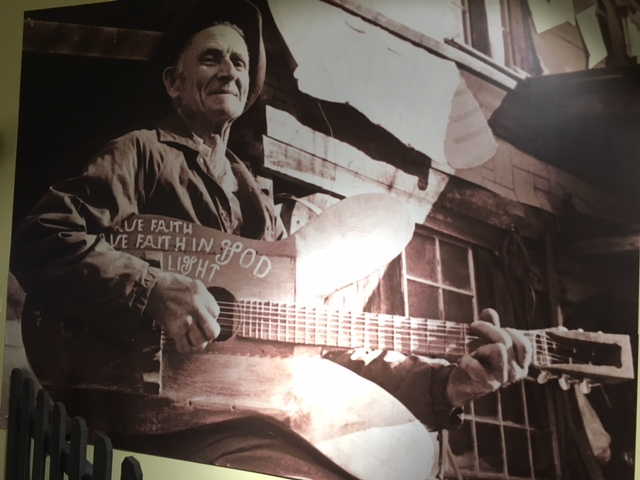 Ed Stilley had a vision that changed his life and left us with a collection of very unique stringed instruments. Ed thought he was having a heart attack and while he was looking up at the sky he heard God tell him to make musical instruments in his Hogscald Hollow Arkansas barn and give them to children. So he did. For 25 years. 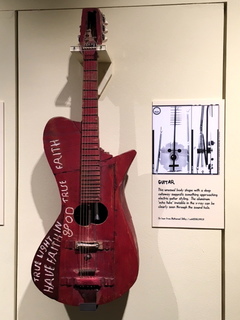 Even though he had no training as a luthier, Stilley made them by sheer trial an error. And they are unique. He didn't know how traditional guitars were made so he started cutting out huge chunks of wood for the headstocks and he used the wrong type of wood for the bodies. When he bent the wood in the shape of a guitar, the wood cracked, he left them cracked, creating oddly shaped 'horns' and off kilter designs that raise and eyebrow. Or two. The words 'true faith true light have faith in God' were crudely etched into each instrument with a hand router.

As he continued over the years he gradually learned how to make guitars a little at a time.

He put a rusty door hinge, a steak bone, a stack of dimes, springs, saw blades, pot lids, metal pipes, glass bottles and aerosol cans inside to create reverberation, thinking that's what made the guitars louder. In reality, his designs were not technically appropriate to create natural guitar overtones but he wasn't aware of this at the time, he just plowed forward, making it up as he went. He even went so far as to create a 'jingler' as he called it, designed to increase the volume of his guitars which was woefully inadequate for playing due to his inexperience in using the proper wood and luthier techniques. The 'jingler' was a piece of steel placed inside the guitar neck which in turn was connected to a metal prong at the headstock. The idea was to  'jingle' the strings down the neck which in turn rattled the springs and saw blades inside the guitar. It worked. Little did Stilley know that he was actually making his own African thumb piano also known as the mbira. In the early days the frets were not even and there was no measurements to determine where the frets, nut and bridge would be to ensure adequate tuning and intonation. He just put the parts anywhere he saw fit. Because of this his early creations were not playable. However, over time, he learned how all of this worked and he ended up making instruments that could be tuned and played properly. Stilley made over 200 instruments before old age got in the way.

There are two books that document Stilley's instruments:

Gifted: The Instruments of Ed Stilley by Tim Hawley

Both titles are available on Amazon.

"True Faith, True Light" will be on display at the Old State House Museum through early 2018.

Permalink Reply by Kigar on February 6, 2017 at 7:41pm
Cool story and some great instruments! Lots of ideas for some future builds too.

What a great story.

So much to think about - genuine, no rules creativity, perseverance, "for the love of it" and more.

This looks like a show not to be missed! Thanks Bill and CigarBoxNation in bringing this to my attention! I've always loved the story and the folk art that goes into each of Ed's guitars!

Started by John Derrett in Performances, How to Play, Lessons, Concerts. Last reply by Sam Blessing 2 hours ago. 8 Replies 1 Like

Started by Taffy Evans in Other stuff - off topic, fun stuff, whatever. Last reply by Carl Floyd yesterday. 6 Replies 0 Likes

"You are the bluesman Uncle John! You’ve got the groove and the black & white moves. In…"
2 hours ago

"I got tired watching you hustle through the set-up Kale! I thought everything sounded pretty good…"
2 hours ago

This group is for discussing the basics of CBG building for newer builders - where to start, what…See More
2 hours ago
2966 Comments 102 Likes

"Glad to hear it Kale! That is why I make it available. Christmas songs are really fun to do in a…"
6 hours ago

"I’m not sure how much rigidity they add to the neck, probably some. It does make it possible…"
6 hours ago

"You are very observant Kale! I have been going crazy with buzzing cigar boxes. I thought a custom…"
6 hours ago